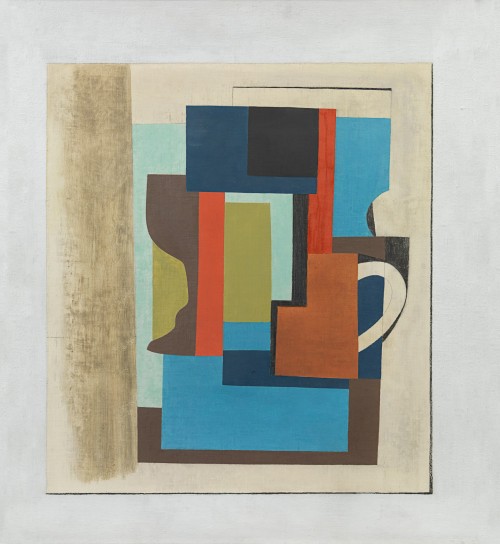 by inheritance to his wife Gloria, dowager Countess Bathurst (1927-2018)

This painting is part of the series of important still lifes that Ben Nicholson executed in Cornwall in the last year of the Second World War. Nicholson had moved to St Ives with his second wife, the sculptor Barbara Hepworth, and their triplets in 1939. In 1942 the family took up residence at Chy-An-Kerris, a rambling, rather down-at-heel house in Carbis Bay, a mile south-east of St Ives.

In moving from Hampstead to the far west of England, Nicolson left behind the ‘nest of gentle artists’[1] that had been a hotbed of European Modernism. Colleagues including Walter Gropius, Marcel Breuer, László Moholy-Nagy, Naum Gabo, Piet Mondrian and Herbert Read had encouraged the uncompromising Abstraction of Nicholson’s carved white reliefs, such as 1935 (white relief) (Tate Britain, London)[2]. Upon relocation to Cornwall, the earth hues of the Cornish landscape, the shifting colour of the sea and the textures of rocks, shingle and sand creep into Nicholson’s art, together with a renewed interest in fusing the abstract with the representational. Norbert Lynton comments: ‘What touched [Nicolson] most deeply, on returning to the St Ives area and seeing it again and again, was the light, more Mediterranean than English and all the more joyous for being less reliable than Italy’[3]. He experimented with ‘window still lifes’ in which the simple outlines of jugs and other domestic objects elide with the terrain beyond, fields undulating towards a distant sea, as in 1944 (still life and Cornish landscape) (IBM Corporation Collection, Armonk, New York)[4].

1945 (still life) continues the motif of simple domestic objects seen in profile, with the curve of a chalice and the handle of a cup interlocking with rectangles. The colours echo the landscape: ochre earth, the moss green of the headlands, sea ranging from eau-de-nil to mid-blue to a deep navy. Nicolson has moved away from the fierce right-angles and pulsating ‘urban’ palette of works such as 1936 (gouache) (Victoria & Albert Museum, London)[5], influenced by Piet Mondrian. The geometric shapes of 1945 (still life) are set slightly askew from the vertical, loosening the composition, while the dragged, dry paint on the left hand band adds a sense of depth and texture. Thin black lines to the right and bottom of the canvas reference Nicolson’s carved reliefs and add to the energy of planes and colours seemingly in movement, firing against one another.

1945 (still life) is a triumphant distillation of twenty years’ of Nicholson’s work, his journey through Cubism and Constructivism morphing into a confident freedom, a subtlety of palette and a delight in fusing the appearances of the world with the abstract. Despite the privations of the War and Post-War period, Nicolson and Hepworth found deep inspiration in the Cornish landscape and community in the growing group of avant-garde artists who set up home in the county, among them Peter Lanyon, Wilhelmina Barnes-Graham, Terry Frost and Patrick Heron.

In October 1945 Nicholson had his first Post-War, one-man exhibition at the Lefevre Gallery, which was enthusiastically received and sold well. The Tate Gallery purchased two paintings, 1943-5 (St Ives, Cornwall) and 1945 (still life), ushering in one of the most successful periods of his career.

Ben Nicholson was born in Denham, Buckinghamshire in 1894, the eldest of four children of artists Sir William Nicholson and his first wife Mabel Pryde. He spent his early education at Heddon Court, Hampstead and Gresham’s School, Holt before studying at the Slade School of Fine Art in London from 1910–11, where he met and befriended Paul Nash. Following graduation, Nicholson spent time in France and Italy before living in Pasadena, California for health reasons between 1917–18. He was declared unfit for active service during the First World War due to his asthma. In 1920 Nicholson married the artist Winifred Roberts and they subsequently divided their time between London, Cumberland and Switzerland, often visiting Paris on the way. Having experienced Cubism first-hand, he produced his first abstract paintings in 1924. That same year he held his first solo exhibition at the Twenty-One Gallery, London and was invited to become a member of the Seven and Five Society.

Accompanied by the artist Christopher Wood, Nicholson visited St Ives, Cornwall for the first time in August 1928, where they discovered the painter Alfred Wallis who would become an important influence on them both. In 1931 he met the sculptor Barbara Hepworth, and within a year began sharing a studio with her in Hampstead. Together they held a joint exhibition at Tooth’s Gallery, London in 1932. Nicholson would go on to marry Hepworth after his divorce from Winifred Nicholson was finalised in 1938. From 1933 Nicholson became a member of Unit One and was invited, together with Hepworth, to join the group Abstraction-Création. He began making abstract reliefs in 1933 and a series of white painted reliefs the following year which would establish his international reputation. Winifred’s move to Paris in 1932 with their children meant that Nicholson visited often, enabling him to establish links with other artists there, including Georges Braque, Pablo Picasso and Jean Arp. In 1934 he met Piet Mondrian and played an active role in his move to Hampstead in 1938. Nicholson co-edited the publication Circle: International Survey of Constructive Art with the sculptor Naum Gabo and the architect Sir Leslie Martin in 1937.

In 1939 Nicholson and Hepworth relocated with their triplets (born in 1934) to Cornwall where he resumed painting landscapes and coloured abstract reliefs. His international reputation grew during the 1950s as a result of a series of large still lifes for which he received several important prizes. In 1954 he represented Britain at the Venice Biennale (alongside Lucian Freud and Francis Bacon) and was awarded the Ullisse prize. The following year the Tate Gallery held the first of two retrospectives of his work, the second being shown in 1969. In 1958 he moved to Switzerland with his third wife Felicitas Vogler (Hepworth and Nicholson having divorced in 1951) where he began to concentrate once more on abstract reliefs, including a large wall relief made in 1964 for the Documenta III exhibition in Kassel, Germany. He was awarded the Order of Merit in 1968. Nicholson returned to England in 1971, living until 1974 in Cambridge and then in Hampstead where he remained until his death in 1982. 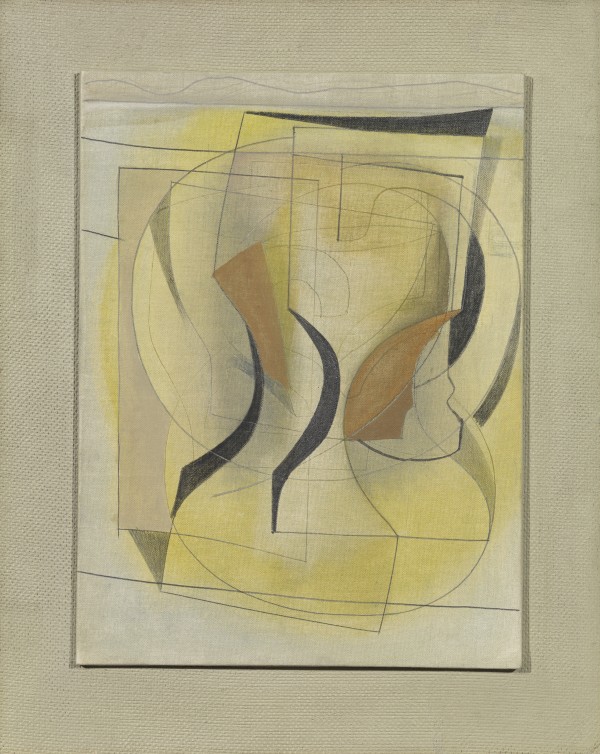