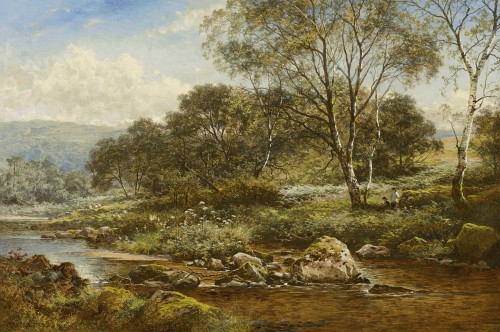 A birchwood on the Llugwy

A birchwood on the Llugwy

Private collection, Jersey, acquired from the above, then by descent

In this beautiful painting, Benjamin Williams Leader represents the River Llugwy, a tributary of the river Conwy which has its source at Ffynnon Llugwy, a lake in the Carneddau mountain range in Snowdonia. The Llugwy, passing through the village of Capel Curig, over the Swallow Falls and flowing past Betws-y-Coed, is shallow in places and in the summertime drops to a very low level uncovering rocks, as seen in the foreground. Leader first went to Betws-y-Coed in north Wales, a favoured location for professional and amateur artists, in 1859 and represented the rivers Llugwy, Conwy and Lledr throughout his long career.

A later painting of the Llugwy, also capturing a bend in the river, it’s wooded banks and shallow pools, was purchased from the Royal Academy exhibition of 1914 by King George V and Queen Mary, the first to enter the Royal Collection. He was later commissioned to paint a miniature watercolour of pine trees for Queen Mary’s Doll’s House.

Born as Benjamin Williams, he added the surname Leader, his father's middle name, to distinguish himself from the Williams family.  Upon abandoning a profession in engineering for art, he became a pupil at the Royal Academy in 1853.  The following year he showed his first picture there, and continued to exhibit prolifically up until his death in 1923.

He achieved notable success with his painting, February Fill Dyke exhibited in 1881.  It

remains one of the most famous Victorian paintings, and is a tribute to Leader's artistic talents.  The Royal Academy elected him an associate in 1883, and academician in 1898.  He also exhibited abroad, winning the gold medal and the legion of honour in Paris in 1889.

Leader was extremely popular in Victorian times and his work sold for high prices.  Today he is recognized as one of the most accomplished Victorian landscape artists of his day.  He usually chose scenes from the Midlands and the Thames valley, although he was also partial to Welsh landscapes, especially around Bettws-y-Coed.

His earlier work reflects his admiration of the Pre-Raphaelites, however, he later developed a broader, more naturalistic style.  A realistic feeling of space and a lightness of atmosphere are characteristic of his work.  James Dafforne, the contemporary art critic of the Art Journal, praised his work in glowing terms in 1871: ‘his style is a happy medium between excess of detail and over elaboration on the one hand, and a dash of execution on the other...we regard Mr. Leader as one of our best landscape painters.’