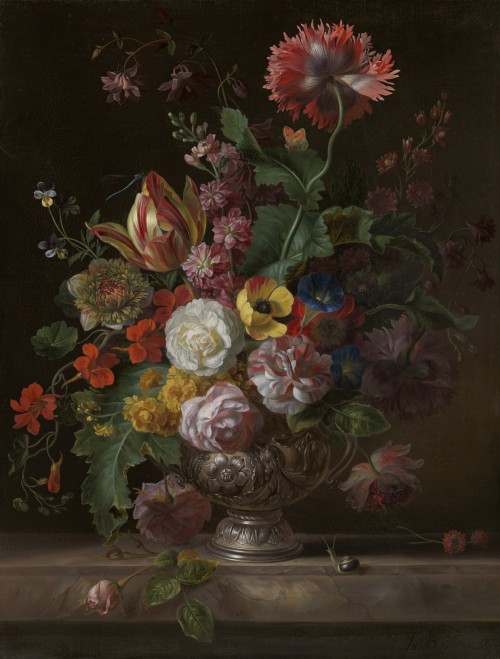 A bouquet of roses, anemones, columbine, an opium poppy, a tulip, Indian cress and other flowers in a silver vase on a marble ledge, with a snail, blue damsel fly and an orange-tip butterfly [i]

A bouquet of roses, anemones, columbine, an opium poppy, a tulip, Indian cress and other flowers in a silver vase on a marble ledge, with a snail, blue damsel fly and an orange-tip butterfly [i]

Jakob Bogdány was born in Eperjes in Hungary, in the County of Sáros. We can deduce his approximate year of birth from later documents. In 1686, he stated that he was 26 years old, while according to his marriage license from 1693, he was 36 years old at that time. This means that he was born between 1656 and 1660. Both the artistic climate in his home country, and the fact that he was a Protestant, while the area where he was born was under Roman Catholic Habsburg rule, make it understandable that he left, probably already before 1680. By 1684, he was in Amsterdam and he was still there, in the company of the still-life painter Ernst Stuven, in 1686. It may well be that Bogdány received part of his training in the Netherlands. In the spring of 1688, the artist arrived in England, where he would remain until his death. In 1700, he gained English citizenship.

Already in Holland he had worked for the Earl of Albemarle, a favorite of King William III, who owned a house near Zutphen, in the east of the country, where reportedly there were twenty-two paintings by Bogdány, which were auctioned in The Hague in 1744. Within six years after his arrival in Britain, Bogdány was employed for the decoration of the Queen’s private apartments at Hampton Court and over the years he worked for many more illustrious patrons, such as the Duke of Devonshire (paintings still in situ at Chatsworth) and Sir Robert Walpole. Jakob Bogdány is best known for his paintings of live birds, but he also painted many still lifes of fruit and floral still lifes, which mostly belong to his earlier career.

This flower painting by Jakob Bogdány was without doubt painted after he came to England. Dated paintings by Bogdány are extremely rare, and with a few extant paintings the dates when they were commissioned are known, which provides something of a framework for dating other works. This flower painting may well have originated in the 1690s.[ii] A firm argument for dating it to Bogdány’s English period is the vase that holds the flowers, which is a typical piece of English silver from the time of the reign of Charles II (1660-1685). Interestingly, two of the rare flower pieces by the Dutch painter Pieter Gerritsz. van Roestraeten, who worked in London from c.1666 until his death in 1700, include silver vases (one silver-gilt) decorated with almost the exact same motif as Bogdány’s.

Many of Jakob Bogdány’s flower paintings, including the present one, clearly show that he reacted to works he saw in Holland, by such artists as Willem van Aelst, Ernst Stuven, Jan Davidsz. de Heem and Abraham Mignon. Particularly the work of the first two, van Aelst and his pupil Stuven, with whom Bogdány was acquainted, had an impact on his style and choice of motifs. In this painting, the profiled marble ledge upon which the vase is standing is certainly a motif that the artist adopted from van Aelst and his followers. A posy by Bogdány appears to have been inspired directly by early examples by Rachel Ruysch from the second half of the 1680s, which suggests that he still had contacts in Holland.[iii] Another one of his examplars, as well as competitors, may have been Simon Verelst, the Dutch painter active in England from 1668 until his death between 1710 and 1717.

Nevertheless, Bogdány’s work has a character of its own, which is immediately recognizable. His lighting and his textures are relatively soft, and his palette is rarely harsh. Although outspoken, the colours always seem somewhat subdued. Bogdány’s choice of flowers is quite standard, although he included some less familiar blooms, such as the Indian cress (nasturtium), and the stock. Several signed flower paintings by Bogdány that are related in their compositions have appeared on art market over the last decades.[iv] Generally, however, they lack the brilliance and subtlety of this excellent example of Bogdány’s flower paintings.

[i] A relatively good copy of this composition, in which the ledge is straight hard stone and the flowers on the ledge and the snail have been omitted, was included in the exhibition Pictures of Ulster Houses, Art Gallery,. Belfast, 1961, cat. no.109, as by Rachel Ruysch (Photo at RKD).

[ii] The signature on this painting with a v between J and Bogdani may well be an early type; later on, he appears to have omitted the v, but owing to a lack of dated works, this cannot be confirmed at present.

Other Works By
Jacob Bogdani: 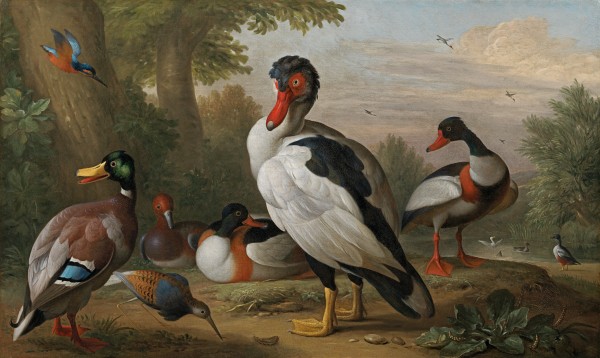