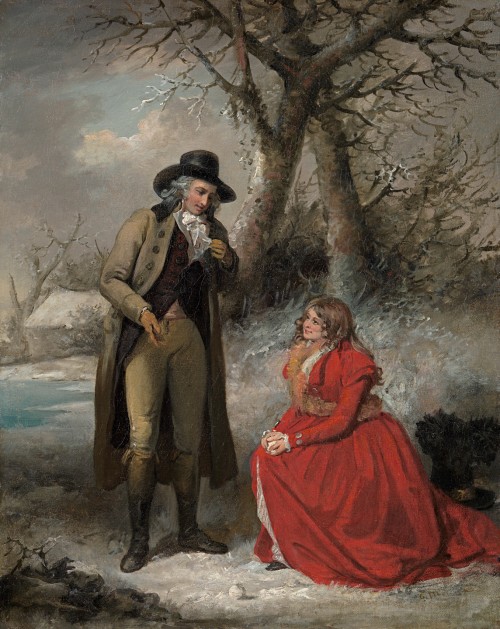 George Morland was one of the most popular artists of the eighteenth century. He was born in London in 1763, the son of the artist and art dealer Henry Robert Morland and his wife Jenny Lacam, herself an amateur artist. Morland Snr had owned a house at 47 Leicester Fields which he sold to Joshua Reynolds, but by the time of George’s birth had suffered bankruptcy. Precociously talented, ‘Master George Morland’ exhibited sketches at the Royal Academy in 1773, when he was ten. He was apprenticed to his father from 1777 to 1784, studying anatomy and making copies of the work of seventeenth century Dutch masters, some of which his father passed off to clients as originals.

Freed from the strict supervision of his father, Morland embarked on the dissolute lifestyle that dogged his career and made him such good copy for early biographers. He never, however, lost his work ethic, and was extremely prolific. In 1785 he travelled to France with a Mrs Hill, who had employed him to paint portraits. Returning to London, the following year Morland married the sister of the engraver William Ward, who was his landlord. Morland collaborated with Ward for most of his career, his compositions reaching a wide public through prints. Between 1786 and 1790 he forged a reputation as a painter of moralizing and domestic genre subjects: his most popular series was Laetitia, or, a harlot’s progress, 1786 (engraved 1789), which has a sentimental, happy ending, in keeping with the sensibility of the late eighteenth century.

After 1790 Morland moved to the rural village of Paddington, just north of London, and focussed on rustic genre scenes featuring the drovers who frequented the White Lion Inn opposite his house. His style became less linear, with stronger colours and more painterly handling. In the first half of the 1790s Morland was at the height of his career, exhibiting the monumental Inside of a stable (Tate Britain) to great critical acclaim at the Royal Academy in 1791. Morland’s farmyards, cottage scenes, country alehouses and gypsy subjects appealed to picturesque taste and are peopled by authentic-looking characters observed from the artist’s own enjoyment of low-life society. Several visits to the Isle of Wight from 1790 inspired Morland to add shipwrecks and smugglers to his repertoire, for example in Coast scene with smugglers, 1790 (Philadelphia Museum of Art).

Morland did not court many patrons, but sold most of his output to dealers or print publishers such as John Raphael Smith; over 250 engravings after his work were published in his lifetime. From circa 1795 his work declined in quality, as he sunk into alcoholism and debt, moving constantly to avoid creditors and fleeing temporarily to the Isle of Wight in 1799. George Morland died in a spunging house (a bailiff’s lodging house) in Eyre Street Hill, Clerkenwell, in 1804.

The work of George Morland is represented in Tate Britain, London; the Wallace Collection, London; the Fitzwilliam Museum, Cambridge; the Castle Museum, Nottingham; the Metropolitan Museum of Art, New York; Philadelphia Museum of Art; the Art Institute of Chicago and the National Gallery of Art, Washington DC.