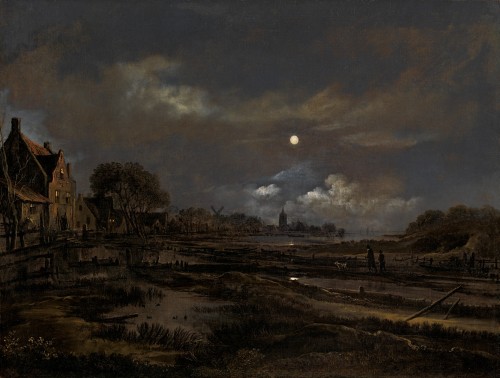 A moonlit river landscape with a village, a windmill and a church beyond

A moonlit river landscape with a village, a windmill and a church beyond

Born in Gorinchem near Dordrecht, Aert van der Neer had settled in Amsterdam by 1628. His first dated landscape is of 1633, but he only forged his personal style from 1643, specializing in extraordinarily delicate and poetic moonlight, twilight and winter scenes. The tonal control required for night scenes had been developed from the Renaissance, in works such as Raphael’s Liberation of St Peter, 1514, in the Vatican Stanze, with its cloud-flecked moon. Adam Elsheimer, a German artist based in Italy, pioneered naturalistic moonlit landscapes like his Flight into Egypt, 1609 (Alte Pinakothek, Munich).

Van der Neer’s Moonlit river landscape gives the viewer the sensation of eyes adjusting to darkness and details coming into focus. Under a silvery full moon, complex water channels and tussocks of land on the edge of the village are revealed. Two men and their dog walk along a path, while the windows of a house glint in the moonlight. The dog alone is a tour-de-force of elegant, allusive brushwork. The central focus is the silhouette of a church tower, framed between moonlit clouds and the reflection of the moon in the water. The beautifully controlled, sophisticated composition gives the impression of spontaneous, naturalistic observation. Not for nothing was van der Neer regarded as the leading painter of moonlight scenes in Amsterdam in the 1640s and 50s.

This work formed part of the stock of Jacques Goudstikker (1897-1940), one of the most important Amsterdam dealers in Old Master paintings between the Wars. Goudstikker died trying to escape the Nazis in May 1940 and his property was ‘Aryanized’ by Reichsmarschall Hermann Göring, an insatiably greedy looter of cultural artefacts. The van der Neer hung in his Smoking Room at Carinhall, the mansion near Berlin named after his first wife, Carin von Kantzow. In 1944 it was transferred to the dealer Alois Miedl as part of a group of around 140 paintings exchanged by Göring for ‘Johannes Vermeer’s’ Christ and the woman taken in adultery, which was in fact a fake executed by Han van Meegeren. Miedl, one of the most notorious art world collaborators with the Nazi regime, appropriated the name of Goudstikker for his business, Goudstikker-Miedl. After passing through several European collections, Aert van der Neer’s Moonlit river landscape was restituted to the heir of Jacques Goudstikker in 2021.

Detail of the monogram. 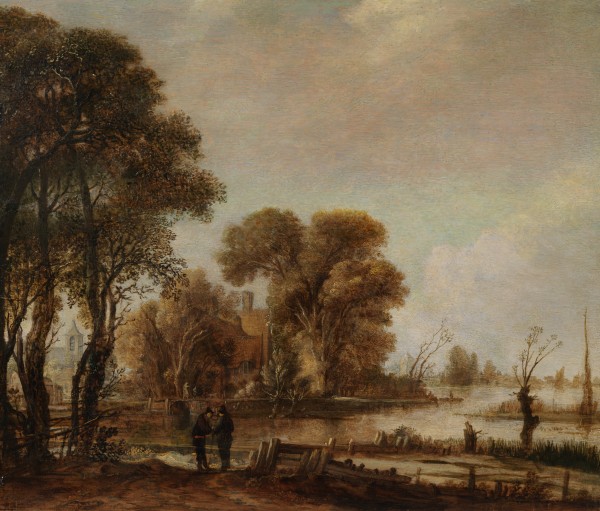