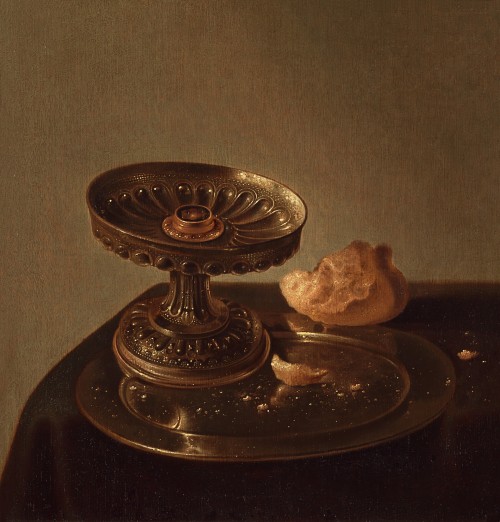 A still life of a silver tazza standing on a pewter plate, with pieces of bread, on a table covered with a dark cloth

A still life of a silver tazza standing on a pewter plate, with pieces of bread, on a table covered with a dark cloth

Jan Jansz. den Uyl was first recorded, already as a painter, in Amsterdam in March of 1619, when he married Geertruijd Treck. We do not know where den Uyl was born, or who his teacher was. He most likely started out painting other subjects than still life, but no such works are known today. He was a contemporary of Willem Cz. Heda (born c. 1596) and Pieter Claesz. (born c. 1597), and like them he can be considered a trend-setter in the development of the modest Dutch ‘breakfast’ still life. Although he must have been successful in his own time, shortly after, until the early twentieth century, his work faded into oblivion. In 1917, Abraham Bredius published some data concerning den Uyl’s life that he had found in the archives, but he exclaimed that it was such a shame that not a single painting by the artist could be traced.[i] Proper reconstruction of den Uyl’s oeuvre started only in the 1920s, and resulted in publications by A. Vorenkamp and P. de Boer.[ii] The latter published a first draft of a catalogue of den Uyl’s still lifes in 1940. N. Vroom, in his pioneer work De schilders van het monochrome banketje, published in 1945, followed suit, updating his catalogue (which unfortunately includes various misattributions and substantial confusion with the presumed oeuvre of den Uyl’s eponymous son) in the 1980 edition of his book, entitled A Modest Message […].[iii] Reconstruction of den Uyl’s work had begun when it became clear that he usually signed his works with an image of an owl, Uyl (uil) being Dutch for owl. Only one work is known in which the owl mark is accompanied by a J JD: Uyl signature.[iv] The painter is well documented in Amsterdam from 1619 onwards and must have died there between 22 October 1639 and 31 January 1640.

Only three dated still lifes by Jan Jansz. den Uyl are known at present, from the years 1632, 1633 and 1637 (see enclosed photocopies).[v] All of these are substantially larger than the still life discussed here, and represent more elaborate compositions. They seem to indicate that den Uyl did not go through significant stylistic changes in the course of the five years during which those three dated works originated. The still life from 1632 in Prague, however, has a rather strictly arranged composition, while the arrangement in 1633 has already become freer and less formal. Although monumental and almost sturdy, like the Prague picture, the composition of the still life from 1637 possesses an added liveliness, though the obliquely placed rummer and silver cup, and the white napkin that playfully winds its way in between the objects, echoed by the curl of the lemon peel. From that point of view, the still life under discussion here should perhaps be dated to the second half of the 1630s: by tilting the tazza on the pewter plate, den Uyl has created a similar liveliness. Moreover, this effect is even more apparent in a still life by the artist in the Museum Boijmans Van Beuningen, Rotterdam which includes the same tazza, and which was most likely painted around the same time as the present work. On the other hand, the same tazza also occurs in den Uyl’s large still life in Berlin, which is close in style and handling to the picture dated 1633.

It is interesting to note that the still life discussed here is known in two more, virtually identical versions.[vi] Only the measurements vary slightly, the present one being the smallest.[vii] All three still lifes are without a shadow of a doubt the work of den Uyl himself and it is impossible to tell which version – if any – was the prime one. While the measurements of the panels differ, the objects are identical in size. Thus, the still life in the present picture possesses less surrounding space, as a result of which it has a stronger presence than the other two versions.

While the background is sparingly painted and kept extremely sober, reflections and sparkling highlights in the still-life motifs themselves play an important role in all of den Uyl’s still lifes. Since the focus in this composition is entirely on the tazza, the play of light is even more important here. Not only has den Uyl meticulously studied and rendered the details of the silver tazza, and the sparkling reflections on its intricately modelled surface, but he has also paid all possible attention to the reflections of the tazza and of the bread and its crumbs in the pewter plate upon which it stands. As such, two ends meet in this still life: modesty in terms of composition and opulence in terms of detail.

Information based on a report by Fred G Meijer of the Rijksbureau voor Kunsthistorische Documentatie, The Hague

[iii] N.R.A. Vroom, De schilders van het monochrome banketje, Amsterdam, 1945 (diss. Katholieke Universiteit Nijmegen) and N.R.A. Vroom, A Modest Message as Intimated by the Painters of the `monochrome banketje', 2 vols., Schiedam, 1980. It is extremely confusing that Jan Jansz. den Uyl had two sons, both called Jan. As a result, the older son, in contemporary documents, was referred to as Jan Jansz. den Uyl the Elder. Like his father, he became a painter, but we are not aware of his subject. A group of landscape drawings has been attributed to him. In both editions, Vroom, without any evidence to go by, evicted a number of still lifes from the oeuvre of the father and attributed them to the son.