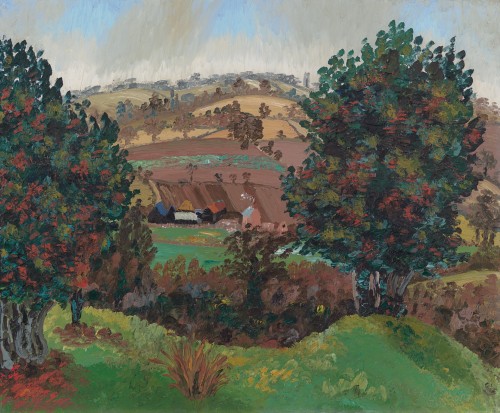 A Suffolk landscape with Steps Farm and Stoke-by-Nayland church

A Suffolk landscape with Steps Farm and Stoke-by-Nayland church

In 1928 Cedric Morris had a sell-out show at Tooth’s in London. At his second show at Tooth’s in February 1930, the press noted that he was all ‘the rage’ with his ‘unusual range of subject….freshness, originality and innocence of outlook’[1]. By the summer of that year he had broken with Tooth’s and never had a regular London dealer for the rest of his career. Another journalist breathlessly reported that Morris had shaken ‘the dust of London from his shoes and the glacial chink of the cocktail-shaker from his ears, and [gone] to live in the country’[2]. With his partner Arthur Lett-Haines (always known as Lett), Morris ensconced himself at Pound Farm, Higham in Suffolk, where he painted, taught art, and created the first of two magical gardens (the second being at Benton End, Hadleigh).

Morris grew up in Glamorgan on the Gower Peninsula and was a countryman at heart, painting landscapes all his life. Made in 1930, A Suffolk landscape with Steps Farm and Stoke-by-Nayland church depicts the undulating landscape within reach of Pound Farm, where Morris was then living. The buildings in the valley are those of Steps Farm, also painted by Alfred Munnings. On the hilltop, almost engulfed by a large tree tinged by the red of autumn, is the imposing tower of Stoke-by-Nayland church, a famous local landmark used to great effect in the works of John Constable. Morris is never too concerned with topography, however, rather seeking to evoke the spirit of a familiar landscape.

He employs a high horizon line which has the effect of tipping the bands of soft ochre and reddish fields, grassland and plough, up against the picture plane, emphasizing the decorative quality of the landscape rather than creating a more realistic sense of recession. A comparable high horizon can be found in a Suffolk painting of the same year, The river Stour in flood (Colchester and Ipswich Museums).

A switchback of brilliant green grass fills the foreground, all the more vivid in its contrast with the autumnal trees. Morris was a highly instinctive painter, using very little underdrawing and developing his compositions with a poetic fluency that miraculously achieves harmony despite the lack of conventional planning. Like his friend Christopher Wood, he wanted to preserve the ‘innocence’ of his response to landscape, the quality encapsulated in the paintings of the self-taught fisherman-painter Alfred Wallis, ‘discovered’ by Wood and Ben Nicholson at St Ives in 1928, but probably known to Morris and Lett even earlier[3].

Already disillusioned with the wiles of London dealers, Morris nevertheless went ahead with an exhibition of portraits at Guggenheim Jeune Gallery in 1938. A guest so objected to his work that he began to burn the catalogues and Morris hit him: ‘the walls of the gallery were spattered with blood’[4]. Thereafter Morris abandoned the London art scene. The previous year he and Lett had set up the East Anglian School of Painting and Drawing in Dedham. When the building caught fire in 1940 (gleefully applauded by Sir Alfred Munnings, who hated modern art) the school, as well as Cedric and Lett’s home, moved to Benton End, Hadleigh, Suffolk, where another marvellous garden was created. Students were given creative freedom as well as a solid grounding in technique (not to mention the benefits of Lett’s superb cooking). Alumni include Lucian Freud (who imbibed Morris’s method of painting directly on to canvas, without underdrawing) and Maggi Hambling. Failing sight caused Cedric Morris to give up painting in 1975, but he was still gardening at the age of ninety-one in 1981; he died in Ipswich the following year. 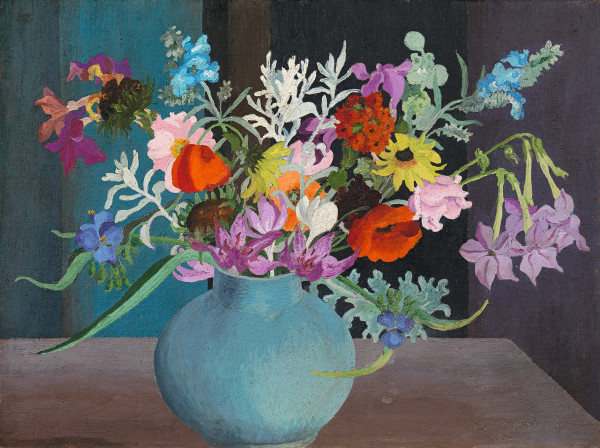