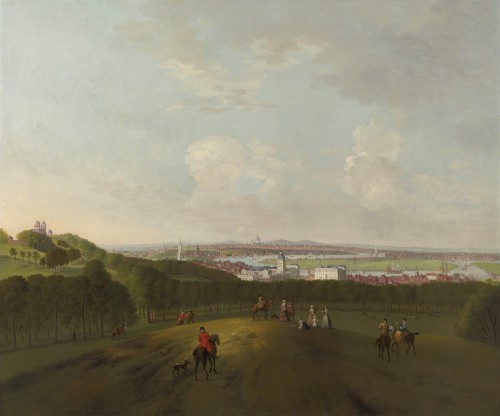 A view of Greenwich, with riders & other figures

A view of Greenwich from One Tree Hill, with riders and other figures

This famous view of Greenwich, surprisingly unchanged today, shows the Royal Naval Hospital and the Thames from One Tree Hill, with the City of London and the dome of St Paul’s Cathedral in the distance. On the left is the Royal Observatory, designed by Sir Christopher Wren for the first Astronomer Royal, John Flamsteed, in 1675. In front of Wren’s Greenwich Hospital is the rectangular block of Queen’s House, begun for Anne of Denmark and completed in 1635 for Charles I’s Queen, Henrietta Maria.

Shining in the sun on the edge of the river is the Naval Hospital, built on the site of the Tudor Greenwich Palace and intended to cater for sailors wounded while serving their country, as the magnificent Chelsea Hospital catered for the Army. Designed by Christopher Wren and Nicholas Hawksmoor, it remains one of the finest architectural assemblages in Britain. In Tillemans’s painting, the left-hand, King William’s Block, built between 1698 and 1723, is near completion, while the right-hand, Queen Mary’s Block, completed after 1716, lacks the balancing dome over the Chapel. Raines (op. cit.), thus dates this work circa 1718.

To the left of the Naval Hospital is Hawksmoor’s St Alfege, Greenwich, newly built in 1718. Across the river are the still-green spaces of the Isle of Dogs, with a line of windmills positioned to catch the river breezes: they give their name to today’s Millwall.

This painting was engraved by J Wood in 1744, with variants in the figures. It was engraved by Stevens circa 1750, with the staffage again changed to show ladies in the height of fashion. Tillemans made several variants of this view, depicting the Naval Hospital in various stages of construction. A similar version is in the collection of the Bank of England Museum.

Pieter Tillemans was born in Antwerp in 1684 and probably worked in the studio of the battle and landscape painter, Jan Baptist van der Meiren. In 1708 he came to England with his brother-in-law, the bird painter Pieter Casteels. By 1711 he was a member of Kneller’s Academy of Painting; in 1725 he was Steward of the Society of St Luke. Tillemans painted decorative works, landscapes, copies of Old Masters and the occasional portrait. From 1715 his major patron was George II’s Chaplain, Dr Cox Macro of Little Haugh Hall, Norton, near Bury St Edmunds; he also worked for Earl Spencer, the Earl of Derby and the Dukes of Devonshire, Rutland, Bolton and Somerset. From 1719-21, Tillemans made drawings for John Bridges’s projected History and Antiquities of Northamptonshire. In the 1720s, Tillemans travelled England making country house

views which depict mansions in rolling, panoramic landscapes peopled with lively figure groups, such as hunting scenes. These country house portraits, derived from Flemish landscapes, were

very influential on succeeding generations of painters, as were Tillemans’ views of racing at Newmarket, in which he rivalled John Wootton. In 1724 Tillemans collaborated with Joseph

Goupy on scenery for the Opera House in the Haymarket. In 1733 he retired to Richmond; he died suddenly at Little Haugh Hall in 1734. Among Tillemans’s pupils were Joseph Nollekens and Arthur Devis.

The work of Pieter Tillemans is represented in the Fitzwilliam Museum, Cambridge; Chatsworth, Derbyshire and the Yale Center for British Art, New Haven.