by descent to a private collection, UK

Circular landscapes were a favourite format with de Momper, often in sets of views of the Seasons or the Months of the Year. The present pair opposes the activities of winter with a leafy late summer scene. Characteristically, in the winter scene de Momper makes a decorative feature of the repoussoir of bare trees, described in brown with touches of scarlet, which throw into relief the snow sparkling on the village pathways and the church roof. The activities are typical of the season: chopping and transporting firewood and driving pigs home from market, while the more leisured skate on the frozen river. In both paintings birds soar in a delicate cloudscape.

The late summer scene more is more obviously divided into the colour bands which demarcate distance in late sixteenth and early seventeenth century landscapes: a warm brown foreground, green middle distance and blue far distance. De Momper packs an extraordinary amount of information and activity into a comparatively small circular panel, from the country folk in their vibrant clothes, to the forests which enfold the village, to the distant hills bathed in sunlight. The buildings are Flemish, but the romantic hills are more redolent of much-admired Italian or Rhineland scenery, adding greatly to the idealised charm of the picture. De Momper may have gone to the Veneto in his youth to study in the Treviso studio of the Flemish emigré Lodewyck Toeput, so these ‘blue remembered hills’ may derive from his own experience.

Joos de Momper spans the transition between the panoramic, Mannerist ‘world landscapes’ of Joachim Patinir and the more realistic views of his friend Jan Brueghel the Elder (1568-1625); he was influenced by both artists. De Momper was born in Antwerp in 1564, the son of the painter Bartholomeus de Momper (1535-after 1597), with whom he studied. De Momper became a Master of the Guild of St Luke in 1581, at seventeen years of age (his father was then Dean). He may have gone to Italy in the 1580s to work in the Treviso studio of Lodewyck Toeput, a Flemish emigré painter known as Il Pozzoserrato. Frescoes in S Vitale in Rome, previously given to Paul Bril, were attributed by Gerzi to de Momper.

De Momper married Elisabeth Gobijn in Antwerp on 4th September 1590. They had ten children, including Philip (1598-1634), who also became a painter. From 1591 there were several pupils in his workshop: Hans de Cock, Fransken van der Borcht, Louis Caullery and Peer Poppo. In 1610 de Momper was co-Dean, then in 1611 Dean of the Antwerp St Luke’s Guild. Between 1613 and 1614, also in Antwerp, he met Ercole Bianchi from Milan. He was a close friend of Jan Brueghel the Elder who, until the latter died in 1625, was the artist he favoured most to paint the staffage for his landscapes. Other artists whom de Momper chose for human and animal staffage were Hendrik van Balen, Sebastiaen Vrancx, Frans Francken the Younger, Jan Brueghel the Younger and David Teniers the Elder. Joos de Momper died in Antwerp on 5th February 1635.

The work of Joos de Momper is represented in the Rijksmuseum, Amsterdam; the Kunsthistorisches Museum, Vienna; the Prado, Madrid; the Gemäldegalerie Alte Meister, Dresden; the Ashmolean Museum, Oxford and the Louvre, Paris.

Other Works By
Joos de Momper The Younger: 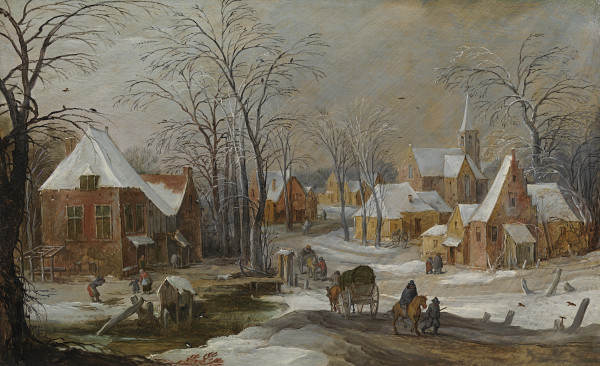