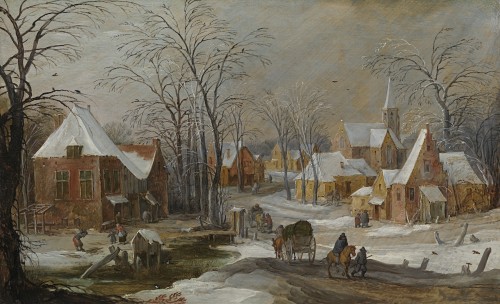 A winter landscape with travellers passing through a village

A winter landscape with travellers passing through a village

Joos de Momper spans the transition between the panoramic, Mannerist ‘world landscapes’ of Joachim Patinir and the more realistic views of his friend Jan Brueghel the Elder, who was four years his junior. Like Jan, de Momper studied in Italy – in his case in the 1580s - and was exposed to its rich artistic heritage. He was in the studio of Lodewijk Toeput, who was active in Venice and Treviso, and painted frescoes for S Vitale in Rome.

De Momper frequently collaborated with Jan Brueghel the Elder before the latter’s death in 1625, Jan providing the exquisite figures in de Momper’s landscapes. Such collaborations between specialists in various genres were common among Antwerp’s artistic elite: Jan famously collaborated with Peter Paul Rubens in paintings such as The garden of Eden, 1615 (Mauritshuis, The Hague).

Klaus Ertz dates this Winter landscape circa 1615-20. The landscape displays the dynamic brushwork, tonal control and atmosphere of de Momper’s mature work. He perfectly evokes the chill of winter in the gradations of white and grey in the snowy landscape, against which the warm colours of human habitation fitfully contend. The vigorous diagonals of the winding village street emphasize the sense of journeying, while diagonal bands of sleet drive against the huddled travellers. Jan’s figures are superbly placed to lead the eye into the landscape, their body language, the shape of the wagon and the gait of the horse executed in light, fluent strokes with the brush tip.

Ertz groups this painting with a small number of de Momper-Brueghel winter landscapes that share strong diagonal compositions and a framework of gabled buildings. Close in date is the Village in winter in the Museum für Kunst und Kulturgeschichte, Dortmund[1]. The Village landscape in winter on a river, circa 1610-15 (Statens Museum for Kunst, Copenhagen) depicts many of the same buildings as the present work, but extends the panel to the right in a river panorama[2]. JOOS (JOSSE) DE MOMPER THE YOUNGER

Joos de Momper spans the transition between the panoramic, Mannerist ‘world landscapes’ of Joachim Patinir and the more realistic views of his friend Jan Brueghel the Elder (1568-1625); he was influenced by both artists. De Momper was born in Antwerp in 1564, the son of the painter Bartholomeus de Momper (1535-after 1597), with whom he studied. De Momper became a Master of the Guild of St Luke in 1581, at seventeen years of age (his father was then Dean). He may have gone to Italy in the 1580s to work in the Treviso studio of Lodewyck Toeput, a Flemish emigré painter known as Il Pozzoserrato. Frescoes in S Vitale in Rome, previously given to Paul Bril, were attributed by Gerzi to de Momper.

De Momper married Elisabeth Gobijn in Antwerp on 4th September 1590. They had ten children, including Philip (1598-1634), who also became a painter. From 1591 there were several pupils in his workshop: Hans de Cock, Fransken van der Borcht, Louis Caullery and Peer Poppo. In 1610 de Momper was co-Dean, then in 1611 Dean of the Antwerp St Luke’s Guild. Between 1613 and 1614, also in Antwerp, he met Ercole Bianchi from Milan. He was a close friend of Jan Brueghel the Elder who, until the latter died in 1625, was the artist he favoured most to paint the staffage for his landscapes. Other artists whom de Momper chose for human and animal staffage were Hendrik van Balen, Sebastiaen Vrancx, Frans Francken the Younger, Jan Brueghel the Younger and David Teniers the Elder. Joos de Momper died in Antwerp on 5th February 1635.

The work of Joos de Momper is represented in the Rijksmuseum, Amsterdam; the Kunsthistorisches Museum, Vienna; the Prado, Madrid; the Gemäldegalerie Alte Meister, Dresden; the Ashmolean Museum, Oxford and the Louvre, Paris.

Other Works By
Joos de Momper The Younger: 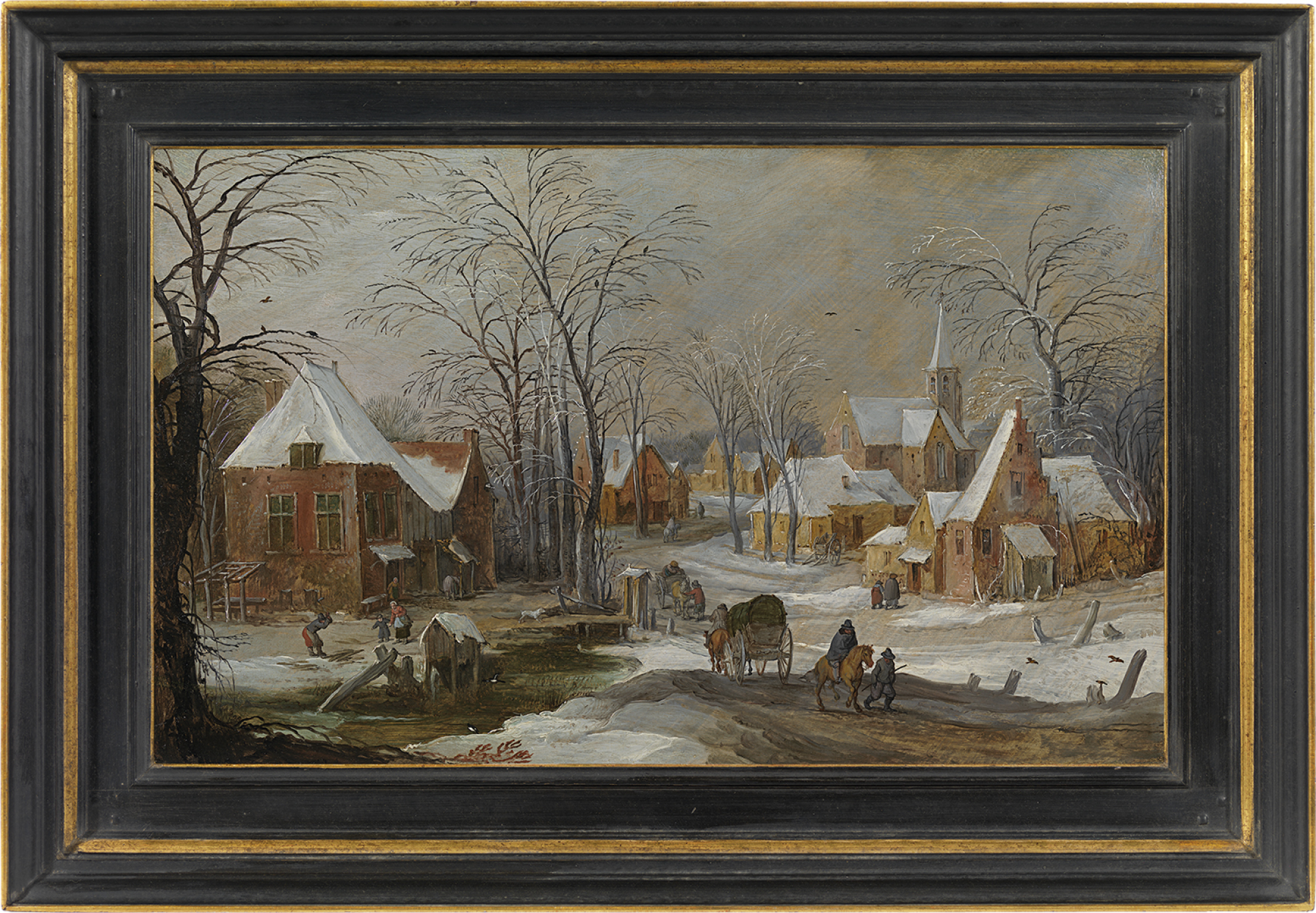