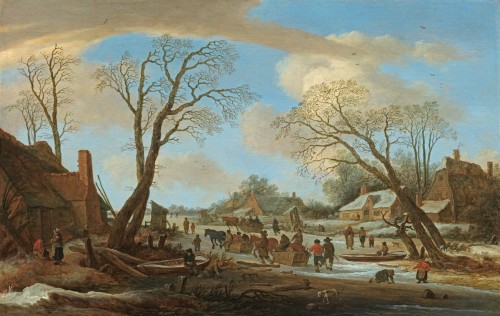 A winter village landscape with peasants on a frozen waterway

A winter village landscape with peasants on a frozen waterway

Pieter de Molijn spent most of his career in Haarlem. From the late 1620s, along with Haarlem artists such as Jan van Goyen (1596-1656), Molijn pioneered the ‘tonal’ landscape, which used a palette of soft greens, browns and slate greys to evoke the atmosphere of the gentle dune landscape of the region.

Molijn painted comparatively few winter scenes. This winter landscape probably dates from the mid-seventeenth century, when there had been a return to interest in local colours, something also seen in the work of Salomon van Ruysdael (1602-1670). The seventeenth century endured a ‘Little Ice Age’ with exceptionally hard winters. The Dutch, accustomed to getting round their watery nation efficiently by boat, took with typical pragmatism to their frozen waterways, enjoying what pleasures winter could afford. In Molijn’s painting, goods and people are transported by horse-drawn sleighs. Other folk venture on to the ice with skates.

The brown tones of the foreground repoussoir are enlivened by a brilliant blue sky studded with drifting clouds and fretted with the bare branches of trees. Birds, scraps of blackness against the white, spiral on the breeze. A similarly decorative use of slender, intertwined trees appears in a frost fair on the ice in a drawing by Molijn dated 1658, representing January from a set of the Twelve Months (Teylers Museum, Haarlem)[1]. Molijn captures the stance and personality of his figures with graphic fluidity, down to the pensive-looking hound in the foreground; touches of red in the peasants’ clothing add a vivid spark and lead the eye around the work.

Peter de Molijn was born in 1595 in the Netherlandish enclave of Austin Friars in the City of London, the son of the Ghent textile trader Pieter de Molijn and Lijntgen Hendrixdr. van den Bos from Brussels. He spent almost his whole career, from 1616 until his death in 1661, in Haarlem. Possibly a pupil of Esaias van der Velde (1587-1630), Molijn became a master in the Haarlem Guild of St Luke in 1616. He held various positions in the guild, including vinder and deken, in the 1620s and 1630s.

In 1618 Molijn was in Rome, where he signed the album amicorum of the portrait painter Wybrand de Geest (1592-c.1661), one of the Bentvueghel group of expatriate Dutch artists: ‘In Rome den 6 junij 1618/Pieter du Molyn’. No works by Molijn survive that might have been made in Italy, although he created Italianate subjects later in his career. Molijn was back in Haarlem by 1621; three years later he married Mayken Geraerts.

Molijn specialized in landscapes of the sandy dunes around Haarlem. From the second half of the 1620s, along with artists such as Jan van Goyen (1596-1656), Molijn pioneered the ‘tonal’ landscape, which used a gentle palette of soft browns and greens to give atmosphere to unassuming, but highly typical, Dutch countryside. His staffage is more complex and individualized than the figures of Jan van Goyen. Molijn’s later landscapes have greater use of local colour. He also painted river landscapes, portraits, interiors, peasant genre and still lifes. 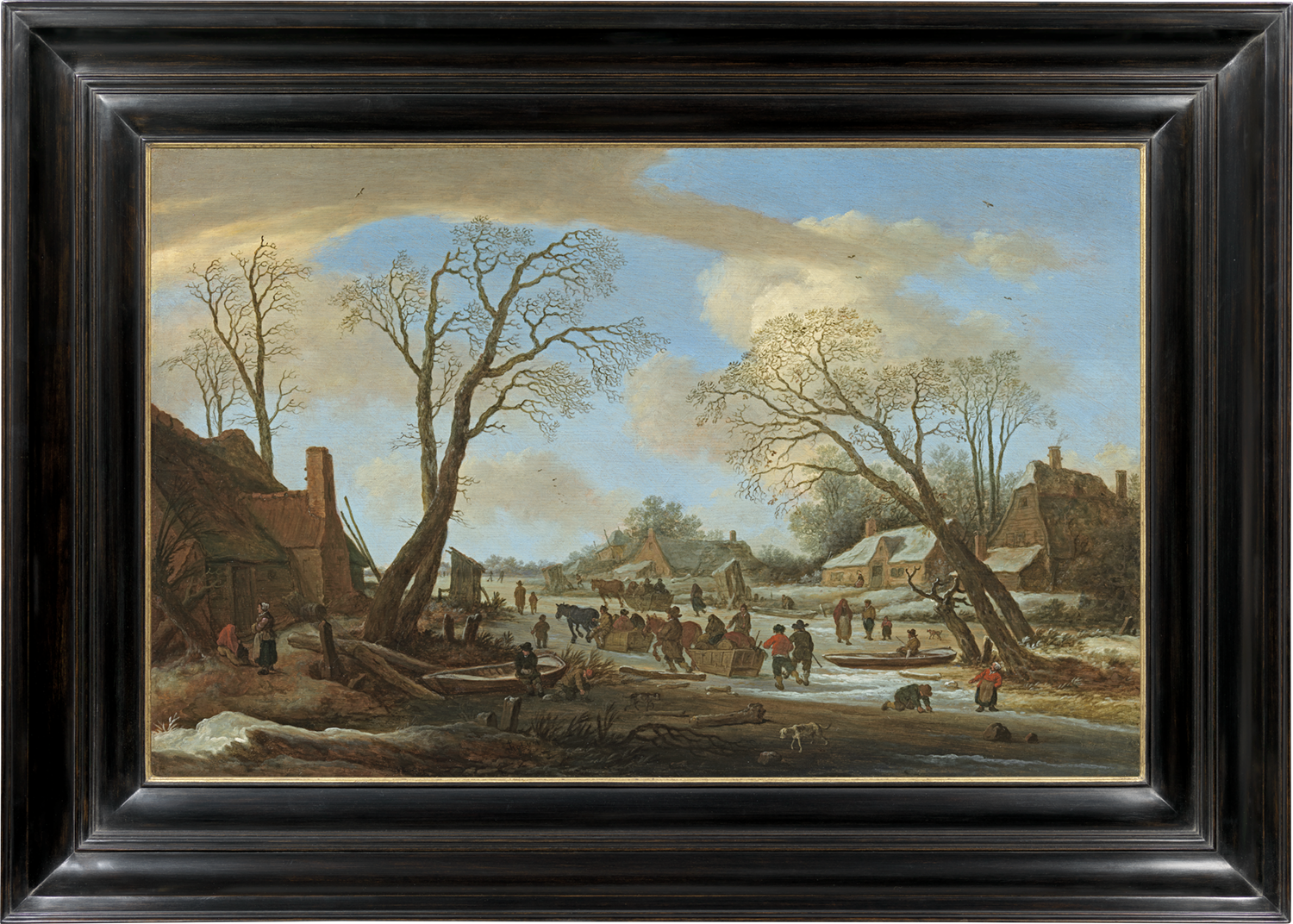