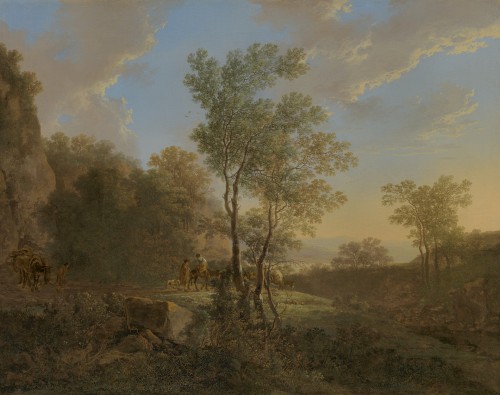 An Italianate wooded landscape with travellers

An Italianate wooded landscape with travellers

Jan Both was one of the most important artists among the second generation of Dutch landscape painters who worked in Rome, drawn by the fame of its Classical ruins and Renaissance art. He joined his brother Andries in that city in 1638, working in an atmosphere in which landscape painting became ever more prominent, with practitioners such as Nicolas Poussin, Gaspard Dughet and Claude.

Both set out to return to Utrecht in 1642. For the rest of his career he painted poetic, Italianate landscapes bathed in golden light, which found a ready market from patrons nostalgic for the carefree days of their youthful sojourns in the South. This painting is a delicate evocation of the countryside of the Campagna near Rome, with its tree-clad slopes and dramatic hills bathed in a sunset glow. The peasants on their homeward journey evoke the peasants of Virgil’s poetry, existing harmoniously with the natural world.

The painting belonged to Frederick Hervey, Bishop of Derry and 4th Earl of Bristol (1730-1803), known as the Earl-Bishop, a colourful – indeed, notorious – character who made many trips to Italy and amassed a splendid art collection.

Jan Both was one of the most important artists among the second generation of Dutch landscape painters who worked in Rome. Born in Utrecht circa 1615, Both was the son of the glass painter Dirck Both (or Boot) and brother of the painter Andries Both (c.1612-1641); he was apprenticed to the Utrecht Guild between 1634 and 1637. The following year he went to Rome to join Andries. The brothers specialized in the low-life genre scenes favoured by the Bamboccianti (followers of Pieter van Laer), imbued in Jan's case with glowing, golden light. In 1639 Both received a commission to paint four landscapes for the Buen Retiro Palace in Madrid (now in the Prado), a project in which Herman van Swanevelt, Nicolas Poussin, Gaspard Dughet and Claude also participated.

Jan and Andries Both started their journey home to Holland in 1642. In 1641 Andries drowned in Venice and Jan returned to Utrecht alone. For the rest of his career he painted poetic, Italianate landscapes bathed in golden light, often with distant mountain vistas, shepherds, travellers or artists drawing the landscape. His pupils included Hendrick Verschuuring, Barend Bispinck and Willem de Heusch; Both was also highly influential on a generation of landscape painters including Claes Berchem, Aelbert Cuyp and Adam Pijnacker.

Both sometimes collaborated with other artists and the figures in his landscapes were sometimes painted by Nicolaes Knupfer, Jan Weenix and Cornelis van Poelenburgh. Both was elected an overman of Utrecht's St Luke's Guild in 1649 and died in his native city in 1652.

The work of Jan Both is represented in the National Gallery, London; the Wallace Collection, London; the Prado, Madrid; the Rijksmuseum, Amsterdam and the Museum of Fine Arts, Boston.