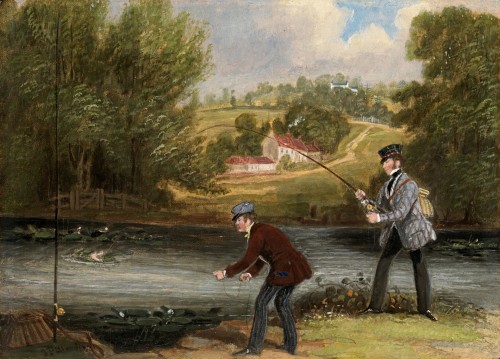 In an eighteenth century style carved and gilded frame

Two gentlemen are angling for trout in the crystalline River Itchen, still one of the most celebrated chalk streams for fly-fishing for trout and salmon. One has a bite and is calmly reeling in his prize; the other prepares to cast.

A keen angler himself, Pollard made a number of paintings of the sport, many of which were made into prints in Pollard’s own day and later. Improvements in fishing tackle and the stocking of rivers led to the growth of angling as a middle-class pastime from the early nineteenth century. South Stoneham is today a northern suburb of the city of Southampton, but in 1831 it was a village among rolling fields and wooded hills. The River Itchen is one of several spring-fed chalk streams that make the county of Hampshire a legendary spot for anglers. The chalk filters the water to a sparkling purity, encouraging vegetation where the fish can hide and a plentiful supply of food. Pools shaded by trees, deep green reflections and the gentle burble of water over stones have long made the Itchen the perfect, tranquil spot for sport and relaxation.

Among Pollard’s other fishing subjects are a pair of paintings titled Fly fishing in the River Lee near the Ferry Boat Inn, 1831 and Trolling for pike on the River Lee (Tate Britain, London).

In 1821, an event occurred that altered Pollard’s future. The King’s printseller Edward Orme commissioned him to paint an inn signboard showing a mail coach with horses and passengers.  This signboard was first displayed in Orme’s Bond Street shop window, where it was seen by the Austrian ambassador Prince Esterházy, who ordered a replica on canvas. This led to many commissions for coaching scenes. In 1825 Pollard married Elizabeth Ridley. In the 1830s Pollard concentrated exclusively on painting. He collaborated with John Frederick Herring Snr (1795-1865), providing landscape backgrounds, buildings and crowds for racing scenes such as The Doncaster Great St Leger, 1839. Pollard exhibited at the Royal Academy between 1821 and 1839, the British Institution between 1824 and 1844, and at the Suffolk Street Galleries. Many of his works were engraved. 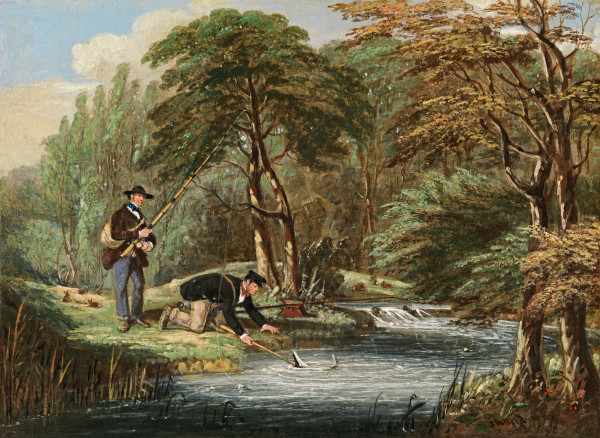