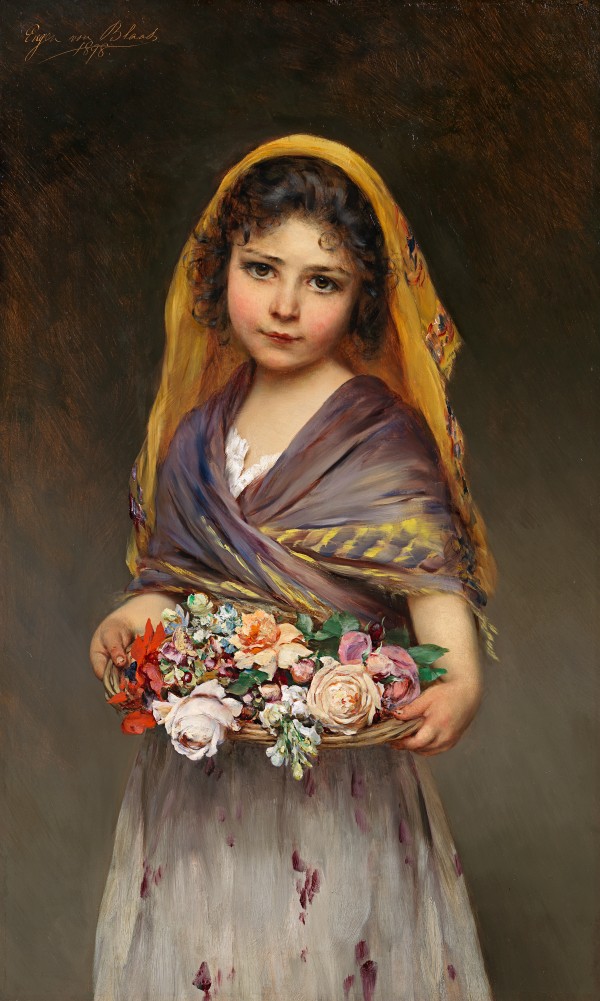 Eugene von BlaasYoung girl with a basket of flowers

Eugene von Blaas captured the everyday lives of humble Venetians amid the ancient masonry of intimate courtyards and unassuming back streets.  As Thomas Wassibauer describes in his catalogue raisonne, ‘He contrasted the decaying grandeur of old Venetian stone with…young people…his young people live their lives within the old walls of a still-important city, and become links in an apparently endless chain of generations who carry on the Venetian traditions and the way of life’

Von Blaas was born in Italy, of Austrian parents.  His father, Karl von Blaas (1815-1894), was a leading history, portrait and fresco painter of Roman society of the late Biedermeier period, and Eugene received his artistic training from him.  Karl von Blaas had studied at the Academies of Rome and Venice at the time when both cities were within the Austrian Empire.  He became a professor at the Academy of Venice, and his son Eugene assumed the position later in his life.  Karl had another son Julius who was also a painter, he specialised in animal and military scenes.

Eugene von Blaas had an international exhibiting career. He was a regular contributor to the Esposizione Nationale exhibitions in Venice and the Jubilaums Austellungs held in Vienna and Munich.  He also showed his paintings at the Royal Academy, the Grafton Gallery and the New Gallery in London between 1875 and 1892.  Images of Italian peasant life had been made popular in the 1800’s by Louis Léopold Robert (1794-1835) and Charles Eastlake (1793-1865).  These picturesque visions of traditional rural life appealed to a generation of collectors who came of age during the troubled moment of the Industrial Revolution.

The combination of the great Classical sites, the picturesque costumes and customs ascribed to the Italian peasantry and the golden delights of the Italian climate had lured hundreds of English and French visitors to Italy on Grand Tours since the 18th century.

The work of Eugene von Blaas is represented at the Leicester City Art Gallery, the Nottingham Castle Art Gallery and the Mappin Art Gallery, Sheffield, the Kunsthistorisches Museum, Vienna, the National Gallery of Victoria, Melbourne and the Art Gallery of New South Wales, Sydney, Australia.