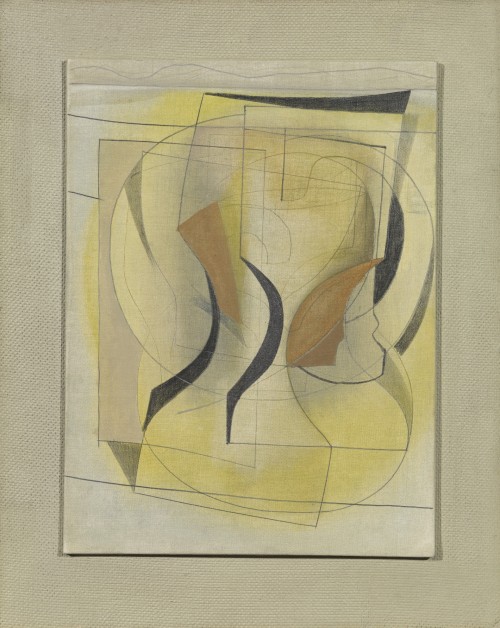 In its original frame

“Cubism’ once discovered could not be undiscovered and so far from being that ‘passing phase’ so long for reactionaries it (and all that its discovery implied) has been absorbed into human experience as we know it today. Painting today, and it was Cézanne who made the first vital moves, and Picasso and Braque – and Mondrian – who carried the discovery further, is a bird on the wing’ – Ben Nicholson[1]

The foot, stem and chalice of a goblet can be traced through the many lines that form Ben Nicholson’s still life (linear), in fact several times over. As the title suggests, the linear outlines of several still life objects echo through this abstracted, Cubist-inspired composition, constructed with overlapping shapes and sharply drawn silhouettes in pencil and pale tones. The forms interconnect as the lines are amassed and the weightless burden of layered, transparent vessels, goblet upon glass, glass upon bottle, vase upon cup, become immaterial perhaps revealing a landscape above and beyond. An unusual fading sunshine-yellow hangs over the centre of the composition which stands out from Nicholson’s traditional palette. It is thought that during this period on the cusp between decades, Nicholson’s still lifes were noticeably influenced by his move to a more spacious studio at Porthmeor Beach, St Ives in 1949 which gave the artist only top lighting to work from and provided no view to be distracted by. He began working on a larger scale, producing what can arguably be described as his finest, most ambitious paintings, ‘the grand baroque still lifes of the fifties’,[2] which this work beautifully illustrates.

The characteristics that distinguish these paintings from his previous still lifes are the rich and deep colours Nicholson used to occupy their surfaces. In still life (linear), the burnt sienna crescent that sweeps outwards from the canvas’ centre could be the accentuated curve of a goblet’s mouth or the neck of a vase at its opening. This autumnal shade, repeated in the form of a twisted trapezium, plays well amongst the yellows, browns and dark grey tones that circulate throughout this still life. Though parts of the still life appear transparent, Nicholson achieves a great sense of depth and volume through dense areas of shading; this weighs down Nicholson’s everyday subject and creates harmony in his open yet fragmentary composition.

Ben Nicholson was born in Denham, Buckinghamshire in 1894, the eldest of four children of artists Sir William Nicholson and his first wife Mabel Pryde. He spent his early education at Heddon Court, Hampstead and Gresham’s School, Holt before studying at the Slade School of Fine Art in London from 1910–11, where he met and befriended Paul Nash. Following graduation, Nicholson spent time in France and Italy before living in Pasadena, California for health reasons between 1917–18. He was declared unfit for active service during the First World War due to his asthma. In 1920 Nicholson married the artist Winifred Roberts and they subsequently divided their time between London, Cumberland and Switzerland, often visiting Paris on the way. Having experienced Cubism first hand, he produced his first abstract paintings in 1924. That same year he held his first solo exhibition at the Twenty-One Gallery, London and was invited to become a member of the Seven and Five Society.

Accompanied by the artist Christopher Wood, Nicholson visited St Ives, Cornwall for the first time in August 1928, where they discovered the painter Alfred Wallis who would become an important influence on them both. In 1931 he met the sculptor Barbara Hepworth, and within a year began sharing a studio with her in Hampstead. Together they held a joint exhibition at Tooth’s Gallery, London in 1932. Nicholson would go on to marry Hepworth after his divorce from Winifred Nicholson was finalised in 1938. From 1933 Nicholson became a member of Unit One and was invited, together with Hepworth, to join the group Abstraction-Création. He

began making abstract reliefs in 1933 and a series of white painted reliefs the following year which would establish his international reputation. Winifred’s move to Paris in 1932 with their children meant that Nicholson visited often, enabling him to establish links with other artists there, including Georges Braque, Pablo Picasso and Jean Arp. In 1934 he met Piet Mondrian and played an active role in his move to Hampstead in 1938. Nicholson co-edited the publication Circle: International Survey of Constructive Art with the sculptor Naum Gabo and the architect Sir Leslie Martin in 1937.

In 1939 Nicholson and Hepworth relocated with the triplets (born in 1934) to Cornwall where he resumed painting landscapes and coloured abstract reliefs. His international reputation grew during the 1950s as a result of a series of large still lifes for which he received several important prizes. In 1954 he represented Britain at the Venice Biennale (alongside Lucian Freud and Francis Bacon) and was awarded the Ullisse prize. The following year the Tate Gallery held the first of two retrospectives of his work, the second being shown in 1969. In 1958 he moved to Switzerland with his third wife Felicitas Vogler (Hepworth and Nicholson having divorced

in 1951) where he began to concentrate once more on abstract reliefs including a large wall relief made in 1964 for the Documenta III exhibition in Kassel, Germany. He was awarded the Order of Merit in 1968. Nicholson returned to England in 1971, living until 1974 in Cambridge and then in Hampstead where he remained until his death in 1982.

[1] The artist’s notes in the exhibition catalogue for his 1955 Tate Gallery retrospective, reprinted in Studio special 1969, p.40.