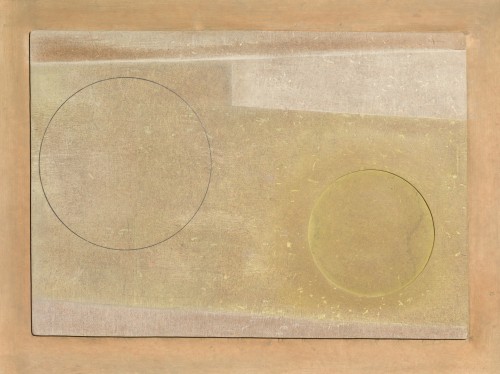 Oil wash and pencil on carved board, relief:

In its original frame

private collection, Milan, acquired from the above circa 1990

Aug 58 (2 circles & green) dates from a seminal moment in the career of Ben Nicholson. The 1950s had been a decade of great critical acclaim for the artist. Following the success of his contribution to the 1954 Venice Biennale, the artist’s work had toured widely across Europe, with retrospective exhibitions taking place in Amsterdam, Paris, Zurich and London. Whilst these exhibitions included works dating back as early as 1922, over half of those on display - predominantly still life and non-figurative compositions – had been completed in the previous few years. Nicholson was particularly pleased with the reception of the latter, noting that a number of French critics had contacted him wishing to acquire such examples, including Michel Seuphor and André Bloc. As Nicholson remarked, “the work cut right across the present Paris abstract “party line” & stirred them up quite a bit’ (Letter March 1955). As is exemplified by Aug 58 (2 circles & green), in the ensuing decade the non-figurative once again became a central theme of investigation for the artist, resulting in a body of work that can be seen to match the ambition and artistic assuredness that had been evident in his abstract paintings and carved reliefs of the 1930s.

It is revealing that both these periods were marked by a determinately European outlook in the artist’s work. In March 1958 Nicholson along with his new wife Felicitas had moved from St Ives, Cornwall to the Ticino region of Switzerland. Significantly Aug 58 (2 circles & green) was completed towards the end of their first summer, and the work can be seen to express something of the optimism and excitement felt by the artist at this moment. Writing soon after their arrival, Nicholson noted that they had found a property with “a long balcony overlooking the lake, rather high up near Ronco village”, adding that “it is so beautiful that you can hardly believe it & the landscape contains lots of work in it for me. (Letter dated April 5 [1958]). The impact of the new environment on the artist’s work was immediate. As is evident in Aug 58 (2 circles & green), through essentially non-figurative forms Nicholson was able to achieve an atmospheric and sensory equivalent to his experiences of the stunning vistas across Lake Maggiore and the surrounding landscape. As he had eloquently outlined many years earlier, although a representational painting might be able to transport you to a place by capturing its appearance, “the abstract version by its free use of form and colour will be able to give you the actual quality” of the place itself (‘Notes on Abstract Art’, Horizon, vol.4, no.22, October 1941).

Aug 58 (2 circles & green) was first shown at the Galerie Charles Lienhard, Zurich in early 1959; an exhibition which the artist felt to have been a great success. As he set out in a letter at the time, he was particularly impressed by the ‘most intelligent’ catalogue essay written by Franz Meyer, the then director of the Kunsthalle Bern, observing that there was clearly “a lot of understanding of the contemp[orary] idea here in the centre of Europe” (Letter dated Feb 13 [1959]).

Ben Nicholson was born in Denham, Buckinghamshire in 1894, the eldest of four children of artists Sir William Nicholson and his first wife Mabel Pryde. He spent his early education at Heddon Court, Hampstead and Gresham’s School, Holt before studying at the Slade School of Fine Art in London from 1910–11, where he met and befriended Paul Nash. Following graduation, Nicholson spent time in France and Italy before living in Pasadena, California for health reasons between 1917–18. He was declared unfit for active service during the First World War due to his asthma. In 1920 Nicholson married the artist Winifred Roberts and they subsequently divided their time between London, Cumberland and Switzerland, often visiting Paris on the way. Having experienced Cubism firsthand, he produced his first abstract paintings in 1924. That same year he held his first solo exhibition at the Twenty-One Gallery, London and was invited to become a member of the Seven and Five Society.

Accompanied by the artist Christopher Wood, Nicholson visited St Ives, Cornwall for the first time in August 1928, where they discovered the painter Alfred Wallis who would become an important influence on them both. In 1931 he met the sculptor Barbara Hepworth, and within a year began sharing a studio with her in Hampstead. Together they held a joint exhibition at Tooth’s Gallery, London in 1932. Nicholson would go on to marry Hepworth after his divorce from Winifred Nicholson was finalised in 1938. From 1933 Nicholson became a member of Unit One and was invited, together with Hepworth, to join the group Abstraction-Création. He began making abstract reliefs in 1933 and a series of white painted reliefs the following year which would establish his international reputation. Winifred’s move to Paris in 1932 with their children meant that Nicholson visited often, enabling him to establish links with other artists there, including Georges Braque, Pablo Picasso and Jean Arp. In 1934 he met Piet Mondrian and played an active role in his move to Hampstead in 1938. Nicholson co-edited the publication Circle: International Survey of Constructive Art with the sculptor Naum Gabo and the architect Sir Leslie Martin in 1937.

In 1939 Nicholson and Hepworth relocated with the triplets (born in 1934) to Cornwall where he resumed painting landscapes and coloured abstract reliefs. His international reputation grew during the 1950s as a result of a series of large still lifes for which he received several important prizes. In 1954 he represented Britain at the Venice Biennale (alongside Lucian Freud and Francis Bacon) and was awarded the Ullisse prize. The following year the Tate Gallery held the first of two retrospectives of his work, the second being shown in 1969. In 1958 he moved to Switzerland with his third wife Felicitas Vogler (Hepworth and Nicholson having divorced in 1951) where he began to concentrate once more on abstract reliefs including a large wall relief made in 1964 for the Documenta III exhibition in Kassel, Germany. He was awarded the Order of Merit in 1968. Nicholson returned to England in 1971, living until 1974 in Cambridge and then in Hampstead where he remained until his death in 1982. 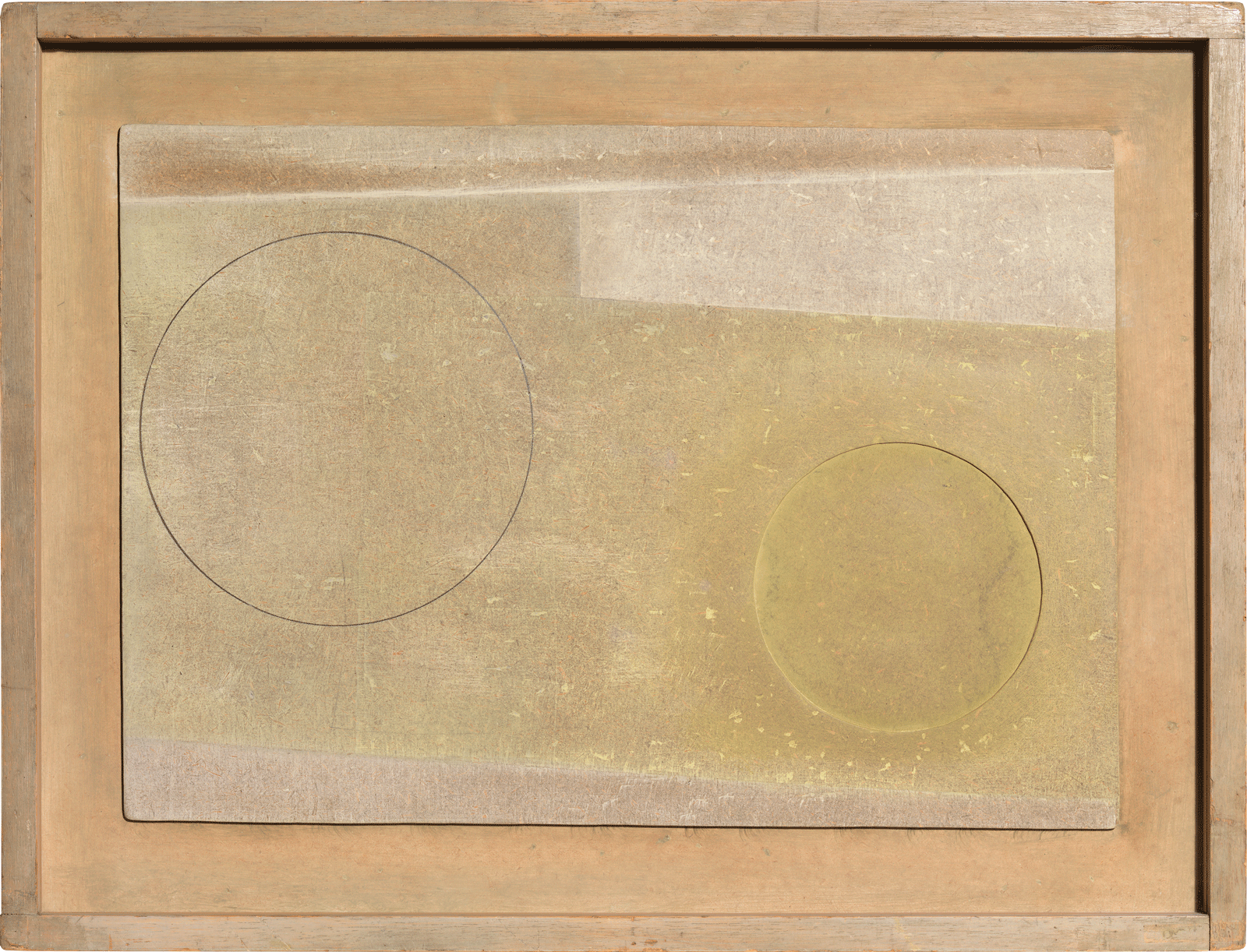