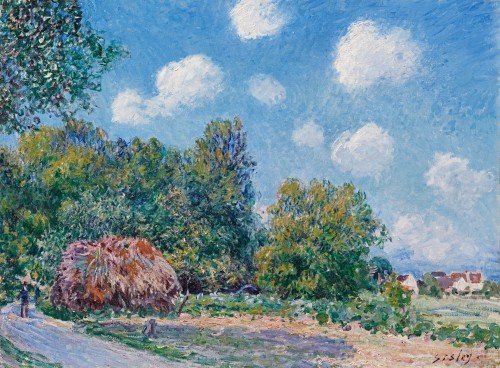 from whom acquired circa 1944 by Albert Ch. Nussbaumer, Montagnola, Switzerland;

Alfred Sisley, of all the original Impressionist group, remained the most committed to landscape painting and to the Impressionists’ original aim of capturing the transient effects of nature. In September 1882 he moved to Moret-sur-Loing, about two hours from Paris on the edge of the forest of Fontainebleau and near the junction of the Seine and the Loing. He settled definitively at Moret in November 1889 and lived there until his death a decade later. Sisley commented in a letter to the critic Adolphe Tavernier: ‘It is at Moret – in this thickly wooded countryside with its tall poplars, the waters of the river Loing here, so beautiful, so translucent, so changeable; at Moret my art has undoubtedly developed most….I will never really leave this little place that is so picturesque’[1].

This vibrant painting was made in the mid-1880s, when Sisley made several compositions exploring the lush foliage and winding forest tracks of Fontainebleau. The forest had played an important part in the development of French naturalism, attracting from the 1830s a group of artists based in the village of Barbizon, including Théodore Rousseau, Narcisse Diaz and Constant Troyon, who chose to paint unassuming landscape and humble country life in a direct, painterly style. This re-examination of nature and immersion in landscape painting presaged the experiments of Impressionism.

Autour de la forêt presents the viewer with the exuberance and fecundity of a June day. Behind a haystack, which dwarfs a man standing on the path, rises a bank of foliage, expressed by Sisley with tight, interwoven dabs of midnight-blue, blue-green, emerald, royal blue and golden paint. The inviting, cool forest is crowned by a sky of brilliant blue, its pulsating light evoked by ripples of quickly-worked paint. Cumulus clouds move busily through this high summer landscape; Sisley’s brushwork conveys his delight in the radiance and complexity of ever-changing nature.

Sisley’s paintings of the river at Moret are composed around long, gentle diagonals which exude a sense of peace. Autour de la forêt and other Fontainebleau paintings of around this date show him developing boldly original motifs. As MaryAnne Stevens comments, ‘During the course of the 1880s, Sisley regularly disregarded the landscape conventions governing an orderly progression from foreground to the distant horizon. In many works, he cast aside such landscape components as a road or river receding conventionally into depth and inserted into their place trees that blocked off or destabilized logical recession’[2]. In Autour de la forêt, the great bank of forest trees fills nearly all our viewpoint, with only a glimpse of a distant village at the right. The man on the track, dwarfed by the immense cascade of shimmering foliage, places into context the grandeur of this ancient woodland.

As Stevens also notes, Sisley’s palette was heightened in the 1880s and becomes ‘more explicitly tied to the principles of complementary colours: intense purples jostle against yellows, greens against reds and oranges against blues’[3]. In Autour de la forêt, the orange-gold highlights of the trembling leaves are juxtaposed with the sky at its most brilliant blue, while the haystack is a riot of ochres, purples and pinks, set against the cool colours of the forest.

A painting of the same date which shares the spirit of Autour de la forêt is La lisière de la forêt de Fontainebleau, 1885 (private collection)[4], which has similar treatment of the sky and a foreground filled with banked-up, superbly observed vegetation. Another painting on this theme is Chemin dans la forêt de Fontainebleau, 1885 (Pushkin Museum, Moscow)[5].

The first owner of this painting was the celebrated baritone Jean-Baptiste Faure (1830-1914), who moved in Impressionist circles and amassed a large collection of their work. Edouard Manet painted him in 1877 as Hamlet in Ambroise Thomas’s opera of that name, a role which Faure created for the 1868 premiere. Faure owned sixty-seven canvases by Manet, including Le déjeuner sur l’herbe and The fifer. He bought around forty works by Monet, including many views of the cliffs at Etretat, where Faure had a house, Les Roches. His collection also included paintings by Degas, Pissarro and Ingres.

Faure’s operatic career lasted from the 1860s to the 1880s; he sang both at the Paris Opera and the Royal Opera House in London. He created several major baritone roles, including Rodrigue, Marquis of Posa in Verdi’s Don Carlos (1867).

Alfred Sisley was born in Paris in 1839 into a prosperous English merchant family. He went to London at the age of eighteen to study commerce with a view to entering the family business, but soon decided to devote himself entirely to painting. Upon his return to Paris in 1863, assured of family support, Sisley entered the studio of Marc Gleyre where he met and became lifelong friends with Claude Monet and Pierre-Auguste Renoir. Sisley’s first recorded landscape dates from 1865, yet his financially comfortable circumstances may account for the fact that there are only eighteen known paintings by him pre-dating 1871.

Sisley’s lifestyle changed abruptly in 1870, the year of the Franco-Prussian War, with the death of his father and the financial ruination of his family. He was then compelled to turn to painting as a means of supporting himself. From this time on his correspondence to friends and patrons is often dominated by pleas for financial aid.

Sisley was the only Impressionist to paint landscapes almost exclusively; his chief interest was in trying to represent the mood and atmosphere of nature. Water always played an important part in his work, a subject matter which gives his paintings a joyous vibrancy and purity of tone. He lived near rivers most of his life, at Bougival, Louveciennes and Marly-le-Roi. In 1880 Sisley moved from Sèvres in the Ile de France to Veneux-Nadon and later to Moret-sur-Loing near Fontainebleau, where he was based until his death in 1899.

Sisley exhibited at the Salon des Refusés in 1863, the Salon in 1866, and contributed to four major Impressionist exhibitions, from the first in 1874 until 1886. Despite a successful one-man show staged by his dealer Durand-Ruel in 1883, Sisley’s paintings found comparatively few buyers during his lifetime beyond a circle of loyal collectors. In 1897, at a large retrospective exhibition at the Galeries Georges Petit, not one painting was sold. Since 1899 Sisley’s subtle and delicate landscapes have entered major private and museum collections throughout the world and he has taken his place at the heart of the Impressionist movement.