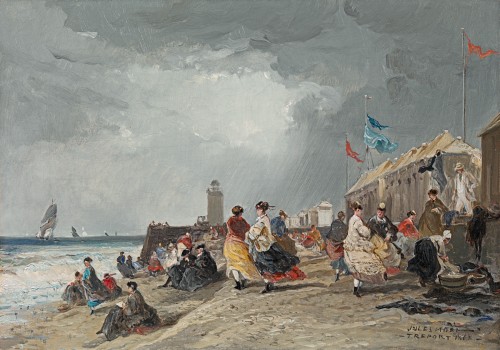 A Breton by upbringing, Jules Noël was painting marine subjects by the 1830s, following a tradition that went back to Isabey, Bonington and JMW Turner. In 1847 he left his beloved Brittany to take up a post as Professor of Design at the prestigious Lycée Henri IV in Paris, returning as often as possible to the inspiration of France’s western coast. He also painted further north, in Normandy, rendered more easily accessible from Paris by the railways, which reached Rouen, Le Havre and Dieppe in the 1840s. Noël’s first Normandy landscape, Vallée de la Touque, 1852 (Musée de Fécamp) was made in the same year as Boudin’s first Honfleur views.

Le Tréport, east of Dieppe, was the Normandy town that Noël most frequently depicted. He was drawn to its dramatic situation at the mouth of the river Bresle, with spectacular chalk cliffs – at 106 metres, the highest on the Pays de Caux - rearing behind. Monet, too, was to make many painting campaigns along these cliffs near his home town of Le Havre, beginning with Etretat, porte et falaise d’Aval, 1864 (private collection)[1]. Noël painted Le Tréport between 1866 and 1878. He sheltered there with his family during the Franco-Prussian War of 1870-1, like so many artists who fled the capital for France’s hinterland or even, in the case of Monet and Pissarro, London. Smaller than Dieppe, Tréport nevertheless had its casino, bathing huts, chic hotels and villas. It attracted the Parisian aristocracy and haute bourgeoisie who were Noël’s patrons.

This painting is typical of Noël’s work of the late 1860s, when he was less interested in densely-packed, picturesque scenes with an historical or genre element than in exploring ‘les effets de lumière, d’atmosphère’[2]. The fashionable figures on the beach have much in common with the work of Boudin, but the style is very much Noël’s own. He was a wonderful draughtsman and this is evident in the way that he ‘draws’ with paint, conveying the folds of a lady’s dress or the stance and personality even of distant figures with a painterly touch strengthened by delicate graphic outlines in brush tip.

In this painting, a breeze rustles the colourful skirts of the ladies, revealing glimpses of well-turned ankles, as the light turns grey and a squall races down the coast. Noël, like Boudin, leaves us in no doubt that holidays by the sea were as much about bourgeoise display as about health and recreation: but all this goes on under the constantly-changing majesty of the Normandy sky.

Jules Noël was born at Nancy in Lorraine, eastern France on 4th January 1810. In 1814 the family moved to Quimper in Brittany, the area with which Jules all his life identified himself, later declaring that he was born in Quimper. His father was a supervisor of work on the canal being built from Nantes to Brest and the draughtsmen on this project may well have given Jules his first drawing lessons. He studied at Louis-Gabriel Charioux’s Académie de Peinture et de Dessin in Brest before going to Paris, where he attended the atelier of the neoclassical painter Jean-Victor Bertin and scratched a living drawing caricatures. Noël exhibited at the Paris Salon from 1840 to 1879.

In 1835 Noël returned to Brittany, teaching drawing in Saint-Pol-de-Léon, Lorient and Nantes, as well as embarking upon a career as a marine painter. In 1839 Noël settled in Nantes, where he  attracted the patronage of Prince Louis, Duc de Nemours, the second son of King Louis-Philippe, who commissioned him to paint his monumental Le Duc et la Duchesse de Nemours en rade de Brest (Musée National des Châteaux de Versailles), shown at the Salon of 1844. The Duc recommended Noël for the post of Professor of Design at the prestigious Lycée Henri IV in Paris. He taught there from 1847 until his retirement in 1879. Among his pupils were the portrait and genre painter Albert Lynch (1851-1912) and the printmaker Félix Buhot (1847-1898).

Noël alternated his teaching duties with trips to Brittany, Normandy and further afield: in 1875 he was in Geneva. A brilliant draughtsman and watercolourist as well as a painter in oils, Noël made views of picturesque Breton towns, or more often its coastline, in a lively, fluid style. Some of these views have genre and historical elements, as in L’arrivée de la diligence à Quimper-Corentin sous le Directoire, 1873 (Musée des Beaux-Arts, Quimper), where the figures are in eighteenth century costume.

Noël won a medal at the Salon in 1853 and in 1870 was made an Officier d’Académie. In 1880 he went to Algiers to live with his daughter Maria-Dina and her husband, dying there the following year.