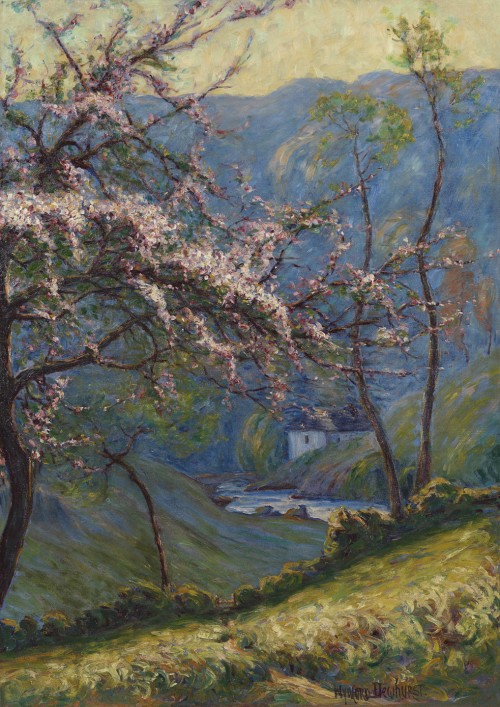 In Wynford Dewhurst’s stunning Blossom time, Valley of La Sédelle, the artist depicts a flowering cherry tree, almost the height of the canvas whose large blossom branches gracefully stretch across the picture revealing glimpses of shaded blue, green valley beyond their exquisite tracery. The soft, golden light of the sun illuminates the joyful profusion of pink and white flowers, applied in radiant dots of paint like confetti. Dewhurst reflects the gilded sky above the high horizon in the animated foreground of shimmering green/gold grass, through which a small path winds into the valley, setting up a sequence of diagonals including a rustic stone wall, the verdant hills and the meandering river Sédelle.

Roger Brown, the author of Wynford Dewhurst, Manchester’s Monet, suggests the location of the present work is ‘…one of the watermills in the Creuse Valley, possibly Le Moulin de la Folie on the tributary the Sedelle which runs into the Creuse at Crozant where Dewhurst lived.’[1] ‘In 1899 Claude Monet had spent a season in the Creuse Valley, a wild and isolated part of central France, where he painted a series of 24 pictures.[2] Dewhurst rented a cottage there for the ten years up to the outbreak of the war in 1914 and would spend several months of each year, with his family, in the village of Crozant, painting the changing atmospheric conditions, both diurnal and seasonal.’[3]

The Creuse Valley became a seasonal artists’ colony from the late nineteenth century thanks to the development of the railway between Paris and Creuse and the invention of tubes of paint which enabled artists to work en plein air. The celebrated French Romantic novelist, George Sand, whose rustic novels were inspired by her love of the countryside, discovered the area in 1827 and became its greatest advocate, describing the ‘steep and romantic banks of the Creuse, [the] wild Crozant mountains’ as a small Switzerland.[4] The author set novels including Jeanne (1844), The Sin of Monsieur Antoine (1845) and later Diary of a traveller during the war (1870) in the valley and invited friends, including Eugene Delacroix, to discover the scenery for themselves.

The British Impressionist painter and writer Wynford Dewhurst studied in Paris at the Ecole des Beaux-Arts under Gérôme and later at the Académie Julian between 1891-95, where he particularly responded to the bold colour and broken handling of the Impressionists. In 1904, he published Impressionist Painting: Its Genesis and Development, the first major British account of the movement (published as four articles in The Studio the previous year), arguing that Constable and Turner were central to its development.

Dewhurst admired the work of Claude Monet above all, retracing his steps and ‘confessing that his most important artistic revelations as a painter occurred in the val de Seine. There, for instance, at Les Andelys he discovered the violet light found in Monet’s mid-day canvases. ‘I remember distinctly, during the summer of 1901, for two hours in the afternoons of those days all Nature, animate and inanimate, bore the aspect of things seen under a strong glare of violet light, exactly as though a tinted glass were suspended between the sun’s rays and the earth.’’[5] Writing a review of the Royal Society of British Artists exhibition in 1900, The Studio correspondent noted this influence in his admiration of Dewhurst’s work:

‘Mr Wynford Dewhurst, who owes much to the art of Monet, has sent half a dozen good canvases, including an Apple Tree in Blossom and two Impressions from a Norman Orchard. These studies are exquisite and sunny in colour, and are redolent of the charm of spring.’[6]

Dewhurst exhibited frequently at the Royal Society of British Artists, the New English Art Club and at the Royal Academy of Arts from 1914. He also exhibited in Paris, Venice, Rome, Buenos Aires and held a series of solo exhibitions in Germany. His work is represented in the public collections of the National Museum of Wales, Cardiff, Kirklees Museums & Galleries, Bradford Museums & Galleries and Manchester Art Gallery.

We are grateful to Roger Brown, author of Wynford Dewhurst: Manchester’s Monet, for his assistance with the cataloguing of this work.