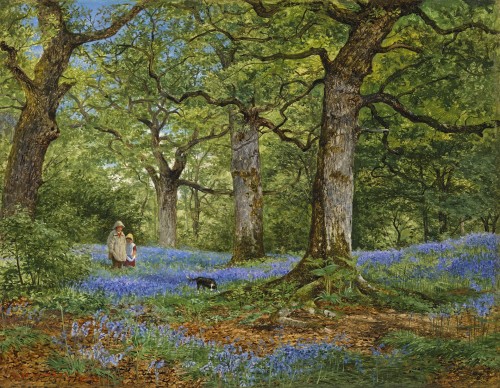 Sold by the artist to Henry Ingram, 1859

This painting shows the woodland near the village of Albury. It was painted after Leader’s first visit to this picturesque part of Surrey in 1858. This is a beautifully light and refreshing scene, with the forest floor carpeted with indigo bluebells.

Born as Benjamin Williams, he added the surname Leader, his father's middle name, to distinguish himself from the Williams family. Upon abandoning a profession in engineering for art, he became a pupil at the Royal Academy in 1853. The following year he showed his first picture there, and continued to exhibit prolifically up until his death in 1923. He achieved notable success with his painting, February Fill Dyke exhibited in 1881. It remains one of the most famous Victorian paintings, and is a tribute to Leader's artistic talents. The Royal Academy elected him an associate in 1883, and academician in 1898. He also exhibited abroad, winning the gold medal and the legion of honour in Paris in 1889.

Leader was extremely popular in Victorian times and his work sold for high prices. Today he is recognized as one of the most accomplished Victorian landscape artists of his day. He usually chose scenes from the Midlands and the Thames valley, although he was also partial to Welsh landscapes, especially around Bettws-y-Coed.

His earlier work reflects his admiration of the Pre-Raphaelites, however, he later developed a broader, more naturalistic style. A realistic feeling of space and a lightness of atmosphere are characteristic of his work. James Dafforne, the contemporary art critic of the Art Journal, praised his work in glowing terms in 1871: ‘his style is a happy medium between excess of detail and over elaboration on the one hand, and a dash of execution on the other...we regard Mr. Leader as one of our best landscape painters.’

Other Works By
Benjamin Williams Leader: 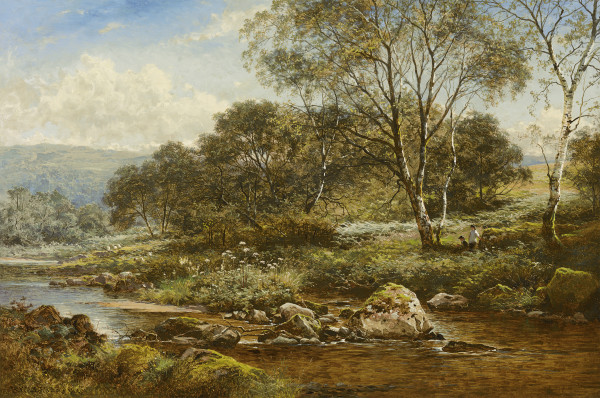