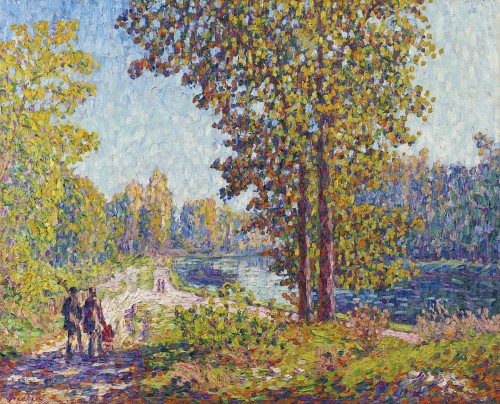 signed, titled and dated 1908 on the stretcher

by descent in the collection of M. and Mme Bouilliat, Paris

Francis Picabia had a very successful early career painting Impressionist landscapes, which are remarkable for their vibrant impasto and subtle response to light. Born into a wealthy Franco-Cuban family, he studied at the Ecole des Beaux-Arts with Fernand Cormon and attended the Ecole des Arts Décoratifs from 1895 to 1897. He turned heads with his mysterious air of a Spanish grandee, his ‘recherché elegance’ and ‘eyes which had both blue and black reflections as in a deep-piled velvet’[1].

Always a rebel, Picabia soon jettisoned the dark tones of academic painting to embrace Impressionist light and colour, finding themes in rivers such as the Loing and the Yonne, which were deeply rural, but easily accessible by rail from Paris. Picabia declared: ‘My school is the sky, the countryside, whether desolate or picturesque, the lanes, the valleys, life in the open air. The sun is the great master. He never awards a medal or a Prix de Rome, but he has created Pissarro and Sisley’[2].

The theme of figures walking along the banks of the Loing is familiar from the work of Alfred Sisley, who lived in Moret from 1880 until his death in 1899. In this work of 1908, Picabia paints the tranquil, sun-soaked river and the light filtering through the trees in homage to Sisley, but adds an extra vibrancy to the brushwork and his vivid colour sense, which parallels the Fauve experiments of the early twentieth century. The figures to the left, in dappled sunlight, are composed from twisted skeins of purple, pink and blue impasto. The trunks of the trees are vibrant dabs of pinks and reds, while the leaves shimmer in dots of gold and ochre. The profound emotion of Picabia’s response to nature is evident in the life and movement which he imparts to the picture surface.

Other Works By
Francis Picabia: 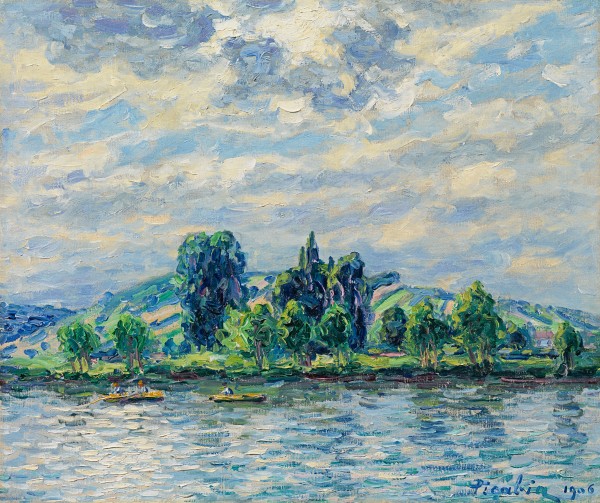