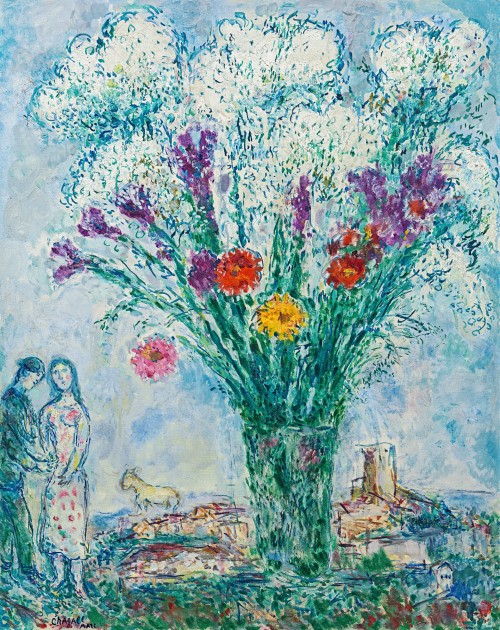 In a contemporary carved and gilded Spanish reverse pattern frame

Private collection, Switzerland, acquired from the above, then by descent

The Comité Marc Chagall has confirmed the authenticity of this work and it is recorded by them as No.2021008

‘…You could wonder for ages about what flowers mean, but for me they’re life itself, in all its happy brilliance. We couldn’t do without flowers. Flowers help you forget life’s tragedies, but they can also mirror them …’[1]

Bouquet d’ete is a rapturous arrangement of richly impasted flowers rising from a central vase into the bright, Mediterranean sky. The vivacious brilliance of the display towers above the medieval hilltop village of St Paul de Vence in south-eastern France. Chagall’s sumptuous bouquet of summer flowers captures the bountiful beauty of the south of France, as well as conveying the sensuous enjoyment of the act of painting, it’s surface as lush and delightful as the artist’s imagery. Bursting with joie-de-vivre, the flowers’ expressive impasto and intense colours contrast the thinner washes of surrounding paint with heightened freedom, throwing them into focus like an ecstatic vision. An archetypal lovers’ gift, the large bouquet of cut flowers may intimate the transience as well as the tumult of love, however the magic of Chagall’s art is to inspire the viewer with his own passion for life.

Paintings of lovers and flowers are among Marc Chagall’s most celebrated images featuring representations of himself with his adored wife and muse, Bella Rosenfeld. Writing of their courtship in his autobiography, Chagall recollected: ‘I only had to open my window, and blue air, love, and flowers entered with her.’[2] As early as The Birthday, 1915 (Museum of Modern Art, New York), lovers and flowers became a perennial theme in the artist’s work, inextricably linked to the celebration and evocation of love. The courting couple on the left of this flourishing summer bouquet, may also signify Chagall’s happy marriage to Valentina ‘Vava’ Brodsky, whom he had met in 1952.

One of the greatest painters of the twentieth century, Chagall was the acknowledged leader of the School of Paris in the 1920s and took French citizenship in 1937. In August 1948, following the death of his first wife, Bella, he permanently settled in France, staying first at Orgeval, near Saint-Germain-en-Laye, the Midi and then Saint-Jean Cap-Ferrat, before moving to Vence in October 1949. It was during this period that the artist rediscovered the natural beauty of French flowers. In 1966, the artist and his second wife, Vava, settled in Saint-Paul living in a large house on the edge of the village called ‘La Colline’. In 1977, the French Government celebrated the artists 90th birthday by awarding him the Grand Cross of the Légion of Honneur.

Marc Chagall was born on the 7th July 1887 in Vitebsk, Russia. From 1907 to 1910, he studied in Saint Petersburg, at the Imperial Society for the Protection of the Arts and later with Léon Bakst. In 1910, he moved to Paris, where he associated with Guillaume Apollinaire and Robert Delaunay and encountered Fauvism and Cubism. He participated in the Salon des Indépendants and the Salon d’Automne in 1912. His first solo show was held in 1914 at Der Sturm gallery in Berlin. Chagall visited Russia in 1914 and was prevented from returning to Paris by the outbreak of war. Chagall settled in Vitebsk, where he was appointed Commissar for Art in 1918. He founded the Vitebsk Popular Art School and directed it until disagreements with the Suprematists resulted in his resignation in 1920. He moved to Moscow and executed his first stage designs for the State Jewish Chamber Theatre there. After a sojourn in Berlin, Chagall returned to Paris in 1923 and met Ambroise Vollard. His first retrospective took place in 1924 at the Galerie Barbazanges-Hodebert, Paris.

During the 1930s, he travelled to Palestine, the Netherlands, Spain, Poland, and Italy. In 1933, the Kunsthalle Basel held a major retrospective of his work. During World War II, Chagall fled to the United States. The Museum of Modern Art, New York, gave him a retrospective in 1946. He settled permanently in France in 1948 and exhibited in Paris, Amsterdam, and London. During 1951, he visited Israel and executed his first sculptures. The following year, the artist travelled in Greece and Italy.  During the 1960s, Chagall continued to travel widely, often in association with large-scale commissions he received.  Among these were windows for the synagogue of the Hadassah-Hebrew University Medical Center, Jerusalem, installed in 1962; a ceiling for the Paris Opéra, installed in 1964; a window for the United Nations building, New York, installed in 1964; murals for the Metropolitan Opera House, New York, installed in 1967; and windows for the cathedral in Metz, France, installed in 1968. An exhibition of the artist’s work from 1967 to 1977 was held at the Musée du Louvre, Paris, in 1977–78, and a major retrospective was held at the Philadelphia Museum of Art in 1985.  Chagall died March 28, 1985, in Saint-Paul-de-Vence, France. 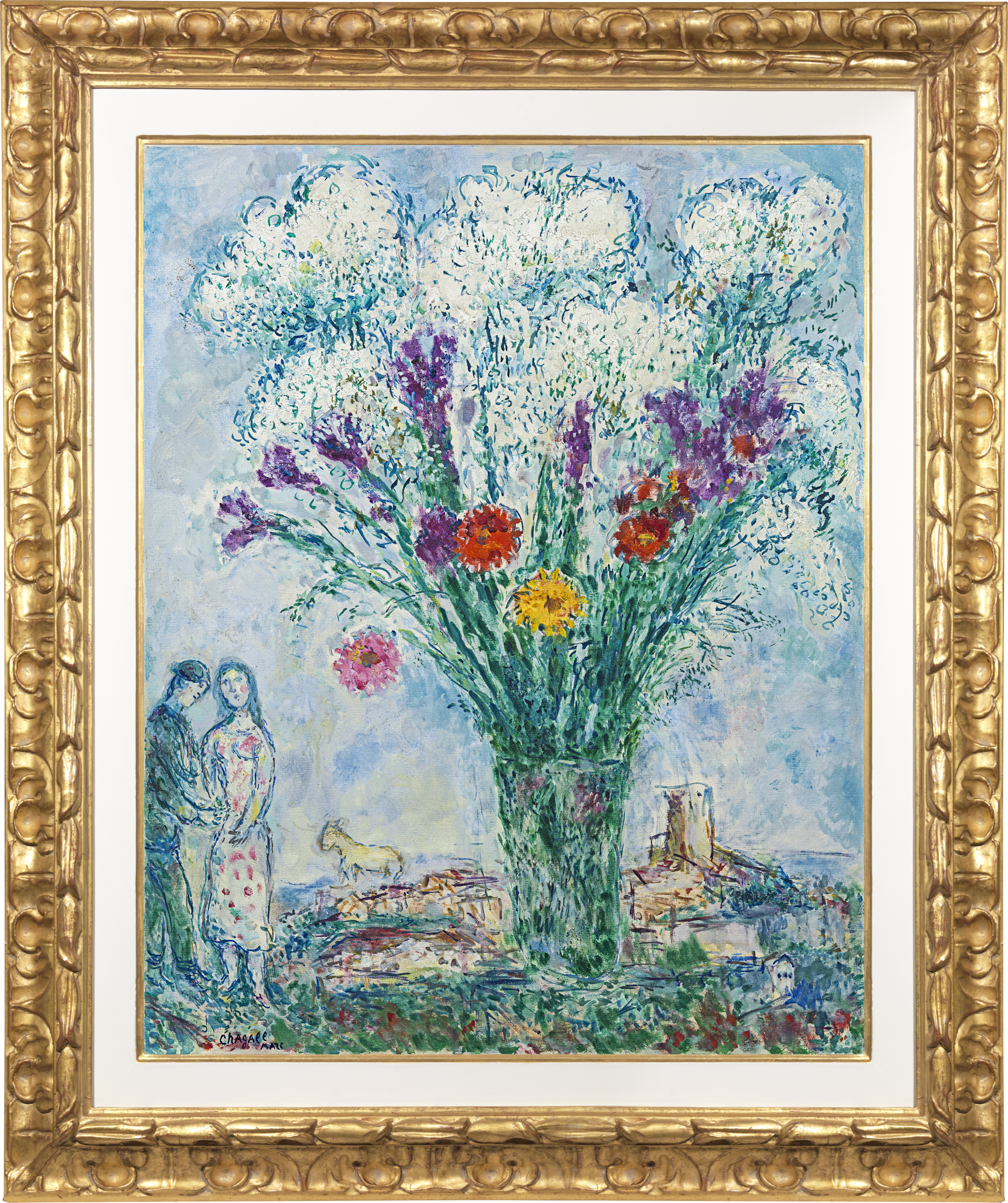