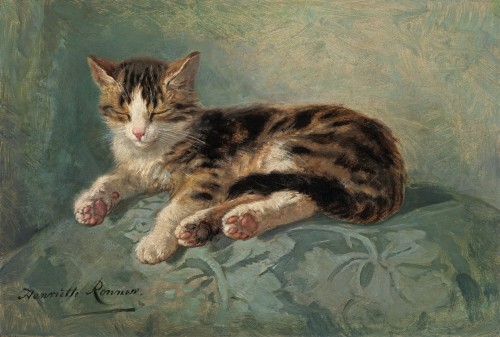 Ronner-Knip achieved the immediacy and sincerity of her cat paintings by rigorously studying her feline models. She built a special glass-fronted miniature studio in which her cats strolled about, slept and played undisturbed by the artist as she sketched. In the present work, the artist captures a sleeping tortoiseshell or calico cat, resting on a pale teal brocade with unrivalled charm and unerring excellence of execution. With lively, impressionistic brushwork and short, scratch marks made with the end of the brush, the artist successfully simulates its soft, downy fur and whiskers. The sumptuous pale green fabric which surrounds the pampered cat suggests a luxurious domestic interior; a wealthy home owned by a loving family.

Henriette Ronner-Knip is perhaps best known for her paintings of dogs and cats, but it was not until her later life that she specialized in these genres.  She came from a family of artists and received her earliest tuition from her father Joseph Augustus Knip (1777-1847).  At the age of fifteen, she sold her first painting in an exhibition at Dusseldorf. During her early years, Ronner-Knip painted many subjects including genre scenes, landscapes and still lifes.  In 1850, she married Telco Ronner and they moved to Brussels where she was to spend the rest of her life.  In 1860, she exhibited a painting entitled La mort d’un ami which was highly acclaimed, establishing her reputation as a painter of dogs.  The Queen of Belgium commissioned her to paint two of her favourite lap-dogs in 1876 and the success of these works led to many more commissions.  Ronner-Knip counted most of the crowned heads of Europe amongst her patrons.  Among her most prestigious clients were the King of Hanover, Don Fernando King of Portugal, Emperor Wilhelm I King of Prussia, Baron Tindal of Amsterdam, the Duchess of Edinburgh and the Princess of Wales.  She began to paint cats in works that were popular for their humorous and anthropomorphic characterization.  These domestic pets were often depicted in luxurious interiors, lying on silk cushions and chairs or playing in fancy baskets.

Ronner-Knip exhibited widely throughout her career and was elected to many artistic societies.  The ‘Natura Artis Magistra’ Society of Amsterdam elected her to membership in 1850 and Ronner-Knip was made a member of merit in the Academy of Painting and Drawing in Rotterdam in 1861.  Her paintings won medals in exhibitions around the world, including two bronze medals, one vermeil medal, five silver medals and six gold medals.  The King of The Netherlands also presented her with a ‘Unique Medal of Merit’ in 1874.   Her international reputation was confirmed at the prestigious World Fairs, first by an artistic medal at the Centennial Exhibition held in Philadelphia in 1876, then by a gold medal at the Colonial and International Exposition held in Amsterdam in 1883 and a silver medal at the Universal Exhibition held in Edinburgh in 1883. 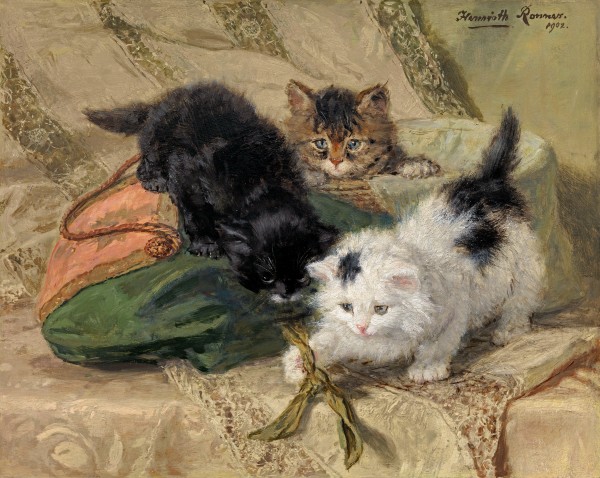 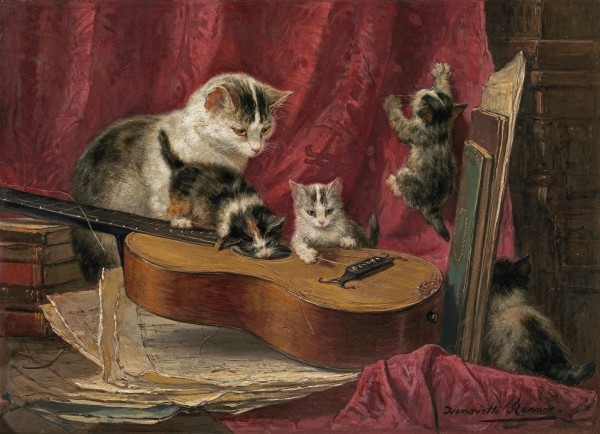