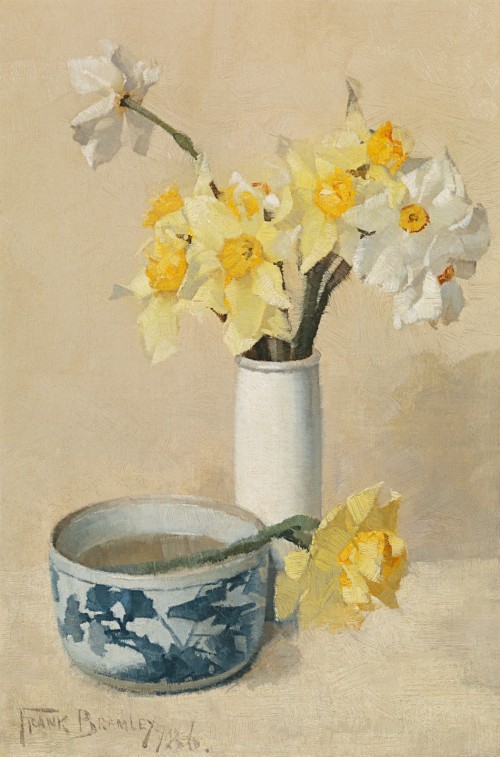 Mr & Mrs Alan Fortunoff, acquired from the above

In this delightful flower piece, Frank Bramley focuses on a well-tuned study of bright, spring flowers and elegant pottery, his subjects placed in a warm, pale gold setting. Though there are hints and implied traces of a human presence, for example, the single daffodil removed from the bouquet and delicately placed in a blue and white china bowl, this softly rendered observational painting centres wholly on the acute depiction of a blended floral arrangement. In Daffodils and narcissi, the tones Bramley masterfully executes are predominantly sunny: the bright yellow central bulbs of the daffodils harmonising with the cream, buttermilk ‘sailboat’ narcissi; the artist using his square brush technique to articulate the gentle folds of each flower. A measured contemplation of gathered flowers, Daffodils and narcissi reveals the success and confidence with which Bramley applied the binding Newlyn principles of plein air painting and square brush stroke to scenes painted indoors.

A similarly radiant white and yellow bouquet provides a focal point for Bramley’s Domino!, painted the same year as the present work, in which two girls are seated at a table in a whitewashed cottage, absorbed in their game (Crawford Art Gallery, Cork). The painting marks a significant new direction in Bramley’s work and was the first substantial interior scene in oils by a Newlyn artist. The following year Bramley produced a number of important figure pictures, all interiors, including Weaving a chain of grief (Department of Heritage) which was exhibited at the New English Art Club in 1887.

These interior studies confirmed Bramley as a leader of the group - his first interiors pre-dating those of Stanhope Forbes by two years and having a considerable influence on other Newlyn artists: ‘…of the practitioners of this technique Mr Bramley is the easy first; indeed his strength and dexterity are marvellous. He has been called the Father of the Newlyn School.’[1] The Newlyn square brush technique utilised the flat of a square brush in order to lay the paint on the canvas in a jigsaw-like pattern of brush strokes; giving movement to the painted surface and a certain vibrancy. Throughout the 1890s, Bramley’s palette became brighter and his handling of the paint looser and more impastoed, which Daffodils and narcissi wonderfully demonstrates.

Bramley lived in Newlyn between 1884 and 1895 and it was here that he matured as an artist. Like the other leading Newlyn painters, his work grew out of close identification with the fishing community: he shared their confined accommodation, working in the small two-room studio of an old thatched cottage. These challenging conditions provided the setting for many of his most important works.[2]

[2] It was not until 1888 that he acquired his ‘glasshouse’. In 1888, Benjamin Arthur Bateman built an artist’s studio for Stanhope Forbes (1857-1947), the Anchor Studio, which is popularly referred to as a ‘glasshouse’ studio. It was a purpose-built structure and one of the first of its kind in Newlyn, with Bateman later building similar studios for Norman Garstin (1847-1926) and of course, Frank Bramley. Anchor Studio, for example, was built in largely its current form, with the single-storey granite ‘cottage’ at the western end, and a basement of granite piers to the east. Anchor Studio was fitted with a ‘superstructure’ consisting of a glazed roof and walls at the upper level, designed to allow painters to work in direct natural light, whatever the weather conditions. Hence, these studio’s being dubbed as ‘glasshouses’.