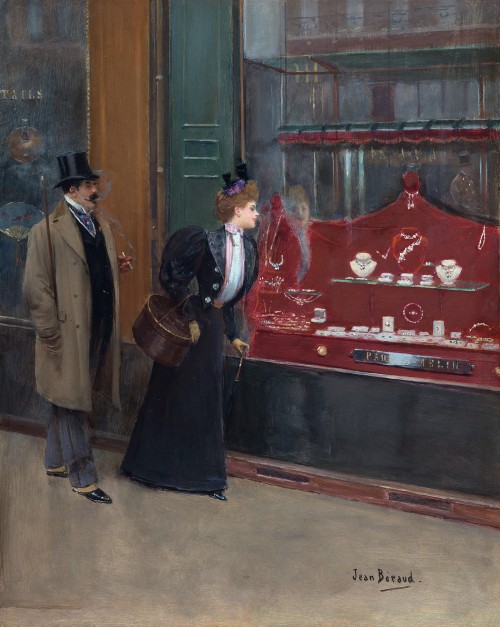 Jean Béraud delighted in portraying Belle Epoque Paris as a centre of luxury and fashion. Baron Haussmann’s reorganization of the city, cutting huge, tree-lined boulevards through the previous medieval maze of streets, was the setting for affluence and display in an increasingly consumerist society. Steeped in the theatre – one of his closest friends was the famous comic actor Coquelin Aîné – Béraud enjoyed the human comedy of the streets, particularly the interactions between men and women.

In this painting, a young woman carrying a hatbox peers into the window of a jewellery shop, watched by an older man-about-town wreathed in fragrant cigarette smoke. Their relationship is ambiguous: is she his wife or a midinette who has caught his fancy? The couple is linked tonally. The young woman’s navy costume echoes the man’s dark clothing, while her purple ribbons and lilac blouse are related to her companion’s purple silk cravat, with its touches of pink, evoked by Béraud with dazzling bravura. The adjacent bar, advertising cocktails, hints at where the couple have been or might be about to go. Against a swathe of red velvet lie glittering diamonds. The woman’s longing gaze is caught in her reflection from the jewellery shop window, an exquisite passage of painting.

Béraud explored the motif of a couple standing outside a jewellery shop in Dispute (private collection)[1] and Devant la bijouterie (whereabouts unknown).[2] In both cases, the man is turning very firmly away from the possibility of buying any jewellery. This second Devant la bijouterie was shown at the Union Artistique Russie France exhibition in Moscow in 1898. The woman in that painting wears a light summer dress of similar style to the present work and it is likely that our Devant la bijouterie likewise dates from the turn of the nineteenth and twentieth centuries.

Jean Béraud was born in St Petersburg in 1849, the son of a French sculptor, Jean Béraud, who had probably moved to the city to work on the cathedral of St Isaac. His mother took the family to Paris after her husband’s death in 1853. Jean, like his future friend Marcel Proust, was educated at the Lycée Bonaparte (today the Lycée Condorcet). He briefly studied law at the University of Paris and in 1870-71 served in the Garde Nationale during the Siege of Paris. Abandoning law for art, in 1872-3 he studied in the studio of the portrait painter Léon Bonnat. Béraud exhibited two portraits at the Salon in 1873, showing there until 1889.