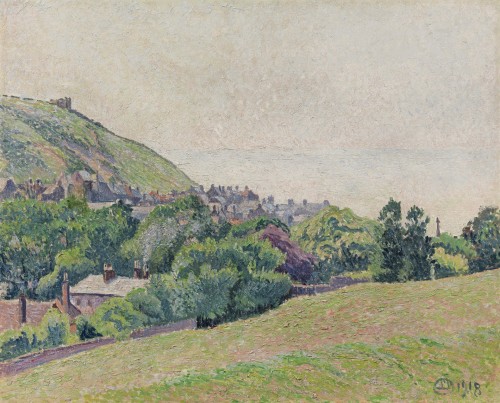 inscribed on the reverse of the stretcher: To Robert Solomon from LP

Robert Solomon, a gift from the artist in 1924

Lucien Pissarro lived in Hastings at 2 High Wickham on East Hill[1] from 11th January to 10th July 1918 and made ten oil paintings while there, working en plein air, usually in the mornings for better light. East Hill and Old Town, Hastings, painted in June, looks from the western side of the town across the buildings of the Old Town to the grassy slopes of East Hill, surmounted by the castle-like entrance to the funicular railway, built in 1902. In the distance, a band of palest blue takes the eye to where the sea meets the shimmering sky. When he first arrived in Hastings, Lucien was constrained to avoid sea views by the terms of his painting permit: the authorities were worried that German spies in the guise of artists would learn secrets about the defence of this important coastal area. Pissarro, a British citizen with a French accent, was an object of suspicion to the townsfolk and on one occasion, as he records in his diary for 18th March, was stoned as he sat painting All Saints’ Church[2].

Like his father in his Eragny paintings, Lucien is interested in the relationship between human habitation and nature, with the warm, red brick houses nestling in the folds of the downs and among the emerald foliage of high summer. David Fraser Jenkins, writing about All Saints’ Church: sun and mist (Tate Britain), comments on Lucien’s interest in ‘areas that are half town and half country’, a theme shared by Camden Town School artists such as Spencer Gore[3].

Short, richly impasted, staccato strokes evoke the varied hues and changing textures of the landscape. By 1918 Lucien Pissarro had long since moved away from the strict adherence to Neo-Impressionism, influenced by Seurat, that had captivated both him and his father in the mid-1880s. In 1942 he wrote to his wife’s nephew, John Bensusan-Butt, ‘You are right as to painting: what must be rendered is not the object, but the expression of feeling caused by the object’[4]. Lucien expressed this engagement with the landscape through very subtle colouring, perfect for the subdued radiance of English coastal light, and by a strength and austerity of composition that led the contemporary critic Frank Rutter to comment that he ‘is equally distinguished as a colourist among designers and as a designer among colourists’[5]. East Hill and Old Town, Hastings may derive from the Impressionist tradition, but it is also a truly Modern British landscape.

This painting was given by Lucien Pissarro to Robert Solomon, a keen collector of his work who received several gifts of paintings from the artist and who owned works by David Bomberg, among others.

[1] Today commemorated by a blue plaque.

[2] The Diary is in the Pissarro Collection at the Ashmolean Museum, Oxford. Quoted in David Fraser Jenkins’s essay on Lucien Pissarro, All Saints’ Church, Hastings: sun and mist, 1918, in the Tate online catalogue, https://www.tate.org.uk/art/research-publications/camden-town-group.lucien-pissarro

[4] Letter of 10th April 1942, translated from the French and quoted in Bensusan-Butt’s Introduction to Thorold, Lucien Pissarro, op. cit., p.xvi.

[5] Quoted by Christopher Lloyd in the Preface to Thorold, ibid., p.ix.

Other Works By
Lucien Pissarro: 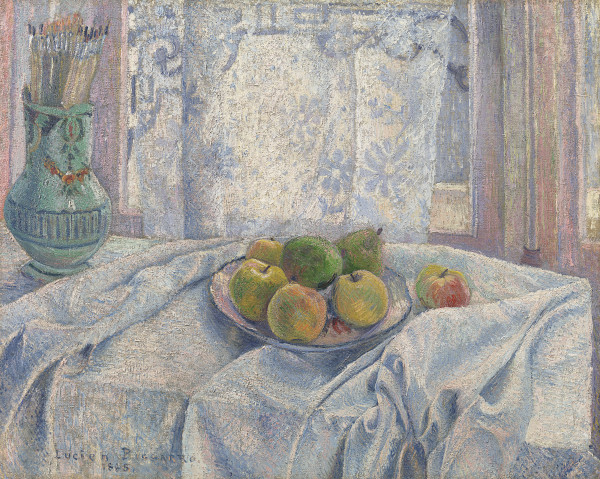 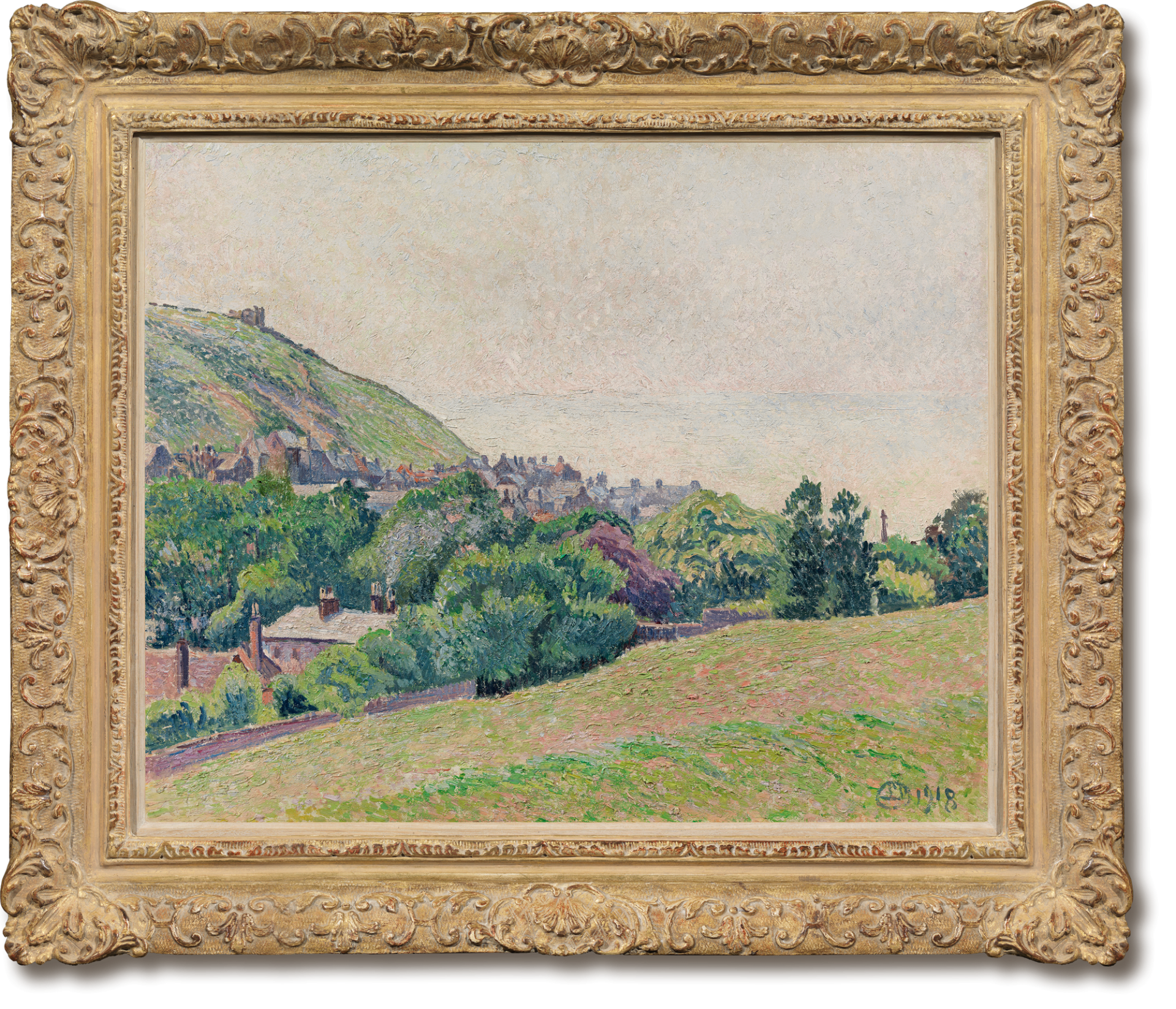