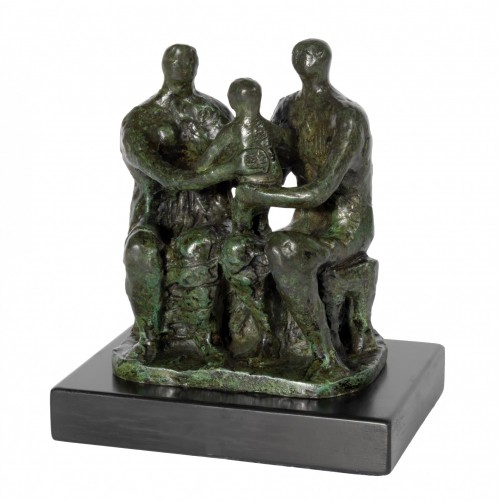 Signed and numbered at the base of the bench: Moore 3/9

With subtle changes to position and posture, Moore expressed a range of interrelations within his family group studies. Centred on the tentative standing form of the young child, the insular trio in this work appears both more dynamic and more intense as the parents look and turn towards the infant, supporting it with their arms. The sense of movement is further enhanced by the irregularity of the surface which seems to ripple in the light as the mother and father react to the vitality of their growing child.

Notwithstanding the stimulus of his public commissions, Moore was fascinated by the subject of the mother and child throughout his career and executed numerous versions in a wide variety of media: ‘From very early on I have had an obsession with the Mother and Child theme. It has been a universal theme from the beginning of time and some of the earliest sculptures we’ve found from the Neolithic Age are of a Mother and Child... (Later on, I did the same with the Reclining Figure theme!) So that I was conditioned, as it were, to see it in everything. I suppose it could be explained as a “Mother” complex.’[1] At this time the subject had a particular resonance for Moore and his wife who longed to start a family, but had suffered a number of miscarriages.[2] Moore’s family, in particular his female relatives, were very important to him, his mother, sister and wife acting as models for many of his works. When Henry and Irina finally had a daughter on 7th March 1946, they named her Mary after her grandmother and aunt.

The artist later explained the personal nature of the series’ origin: ‘The family group ideas were all generated by drawings: and that was perhaps because the whole family group idea was so close to one as a person; we were just going to have our first child, Mary, and it was an obsession.’[3]