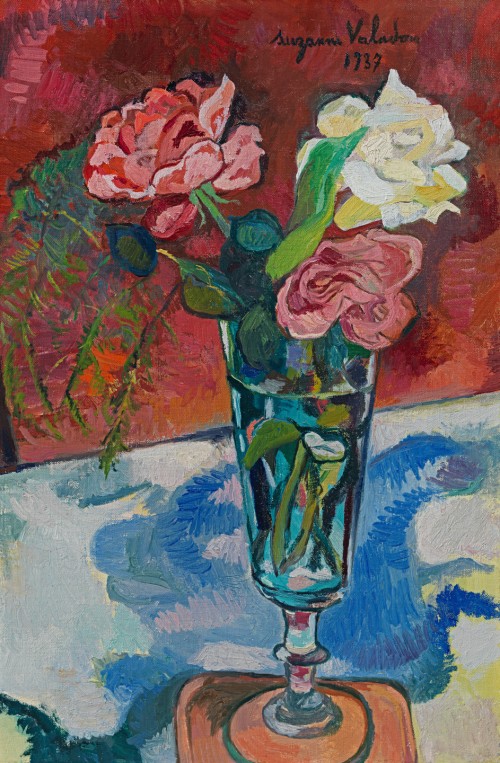 In a Louis XV style carved and gilded frame

Acquired from the artist in 1940 by a private collector, France;

To be included in the forthcoming catalogue raisonné of the work of Suzanne Valadon being prepared by the Comité Utrillo-Valadon, inv. no.7122

Born poor and illegitimate, Suzanne Valadon joined a circus before becoming Puvis de Chavannes’s model at the age of fifteen. She modelled for Renoir, Zandomeneghi and Forain, carefully observing their working methods, for her ambition was to become an artist herself. Taught printmaking by Degas, she began painting full time upon her marriage to the stockbroker Paul Mousis in 1896.

Valadon proudly forged her own style, largely independent of her male artistic mentors. She painted confident nudes, sleekly bounded by black lines; bold landscapes and spare, forceful still lifes. In the 1920s and 30s she received increasing commercial success and critical approbation. Valadon was represented by the dealer Bernheim-Jeune from 1924 and there were retrospectives of her work in 1929 and 1932. In 1937 the Musée du Luxembourg bought three major paintings and many drawings.

Fleurs dans un vase is characteristic of Valadon’s later work in its rich use of colour and luscious impasto. The composition is typically bold and economical, with the glass vase set off-centre and cropped at the foot, viewed from above. The pool of blue shadows on the white tablecloth and the tangle of stalks, leaves and reflections in the water take on their own abstract fascination, contrasting with the pulsating red and pink hues of the roses and the background. Valadon revels in colour and the hypnotic quality of the picture surface. The power and decisiveness of the painting give a sense of her compelling personality.

Suzanne Valadon was the illegitimate daughter of a housemaid. She had jobs as a milliner and waitress before joining the circus, but a fall put an end to her career as a tightrope walker. From the age of fifteen the beautiful Valadon modelled for artists in Montmartre, particularly those who frequented the Lapin Agile. She modelled for Puvis de Chavannes, Renoir, Zandomeneghi, Forain and others, shrewdly observing their working methods. Having taught herself to draw as a child, Valadon became an artist, producing her first signed and dated work, a pastel Self-portrait (Musée du Pompidou, Paris), in 1883. That year she gave birth to Maurice Utrillo (1883-1955), the future painter of Montmartre, whose father was the Spanish painter Miguel Utrillo (1862-1934). Maurice was left with his grandmother while Suzanne went back to work as a model.

In 1924 a contract with Bernheim-Jeune revived Valadon’s finances, enabling her to buy a country property called Saint-Bernard. There were retrospectives of her work in 1929 and 1932; in 1937 the Musée de Luxembourg bought three major paintings and many drawings. Valadon died in Paris in 1938.