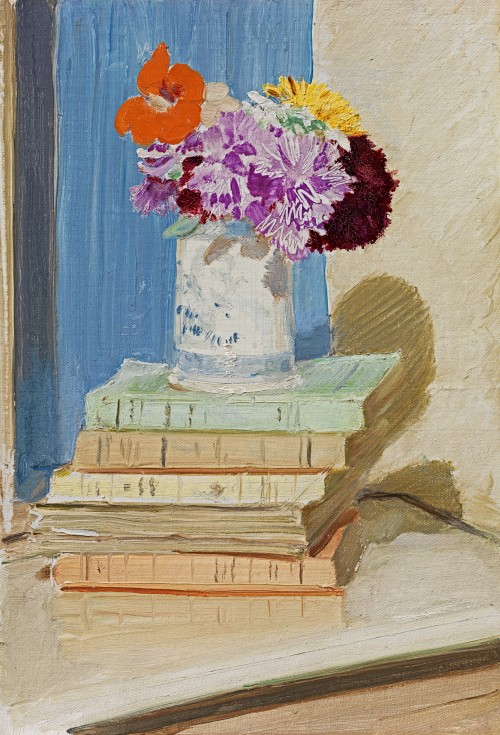 In a Nicholson style black and gold ripple frame

A small bouquet of jewel-like cut flowers stands atop a pile of pastel-coloured, paper-covered books. The popular garden blooms, flowering in high summer, are tightly arranged in a luminous blue and white pot, the curved, single petals of a red-orange nasturtium to the left balanced by the dense, almost flickering layers of a yellow-orange marigold to the right. Mauve and dark maroon double clarkias burst from the pot below, rendered with the joyful use of sgraffito to articulate their jagged forms. Behind the flowers, Nicholson paints a stunning swathe of deep blue in fluid, vertical strokes, picking up the delicate pattern of the vessel. In contrast, the pale cream panel to the right is rapidly executed in feathery diagonal strokes, its tone but not its texture echoed in the light, reflective surface of the table top and books. The diagonal cropping of the surface ledge, as well as the staggered paperbacks, add depth to the corner setting of the still life, their linear forms echoed in the spines of the books and titles, as well as the blue band at the bottom of the pot. Shadows cast by the objects are also thrown at an angle, to the right of the stepped books and forward across the top of the pot by the overhanging flowers. The strength of light is confirmed by thick white impasto at the base of the pot and the scratched outline of the books’ pages to the left.

The original owner of this exceptionally beautiful work was the celebrated poet and writer, Siegfried Sassoon (1886-1967), who recorded in his diary at the end of 1929, that he had spent ‘£60 for a picture by William Nicholson for Stephen.’[1] The entry refers to Stephen Tennant (1906-1987), described as an ‘aesthete’ by Philip Hoare in the ODNB,[2] also an artist and the youngest son of the first Baron Glenconner (1859-1920) and the writer, Pamela Wyndham (1871-1928), later step-son of Viscount Grey of Falloden. Tennant, born and brought up at Wilsford Manor, Wiltshire, attended the Slade School of Art, and became the visual epitome of the 1920s ‘bright young things’, photographed by his friend Cecil Beaton in 1927. He met Siegfried Sassoon on 22nd June that year at a christening dinner for the son of Sacheverell and Georgia Sitwell and began a relationship that would last nearly six years.[3]

Whether Tennant chose not to accept the painting or Sassoon chose not to give it away, it remained with Sassoon at Heytesbury House in Wiltshire and later with his family.[4] At the time the painting was created, Sassoon had anonymously published his Memoirs of a Fox-Hunting Man, a

vaguely fictionalised autobiography of his early, pre-war years in Kent, which was awarded the Hawthornden and James Tait Black memorial prizes and ‘quickly accepted as a classic of its kind.’[5] William Nicholson provided drawings for the illustrated edition published in 1929, as well as a portrait of the hero George Sherston (really of Sassoon) intended for the frontispiece, but ultimately rejected by the author. Nicholson accepted Sassoon’s invitation to illustrate the new edition on 18th December 1928 and began work at Sutton Veny between May and September the following year, most likely at the same time as painting Flowers and books.[6] Patricia Reed records Nicholson’s first visit to Althrop in late July, ‘where he sketched Earl Spencer’s hunting kit for the jacket of Sassoon’s novel.’[7]

Sassoon’s connection with the Nicholsons began the decade before through the poet Robert Graves (1895-1985), his friend and fellow officer in the Royal Welch Fusiliers, who married William’s daughter, Nancy (1899-1977) on 23rd January 1918. The following year Nicholson provided non-pictorial labels for The War Poems of Siegfried Sassoon and painted The Great Picnic near Harlech (private collection), which took place on 6th May 1919.[8] A sketch of the picnic identifying the figures, including Graves and Sassoon, was reproduced in the second issue of The Owl in November 1919. Edited by Nicholson and Graves and financed by the former, The Owl was a new journal devoted to art and literature and featured poems by Sassoon in all three issues.[9] Sassoon also drew attention to the periodical in his new role as literary editor of the Daily Herald.[10] Colin Campbell writes, ‘although only three issues of the periodical appeared, it achieved what it set out to do. ‘The Owl’, as the reviewer in the 4 December 1919 issue of The Times Literary Supplement remarked, ‘must be kept as carefully as ever was The Yellow Book. It is no squib to go off and be forgotten, but a treasure.’[11]

We are grateful to Patricia Reed, author of William Nicholson Catalogue Raisonné of the Oil Paintings, for her assistance with the cataloguing of this work.

[4] Sassoon married Hester Gatty in 1933, the daughter of Sir Stephen Herbert Gatty, and they had a son, George Sassoon in 1936. Heytesbury House was a few miles from Sutton Veny and it is possible that Sassoon found the property while visiting Nicholson. Sassoon knew the area through visits to Nicholson, staying with a friend in August 1924, the year after Nicholson moved in.