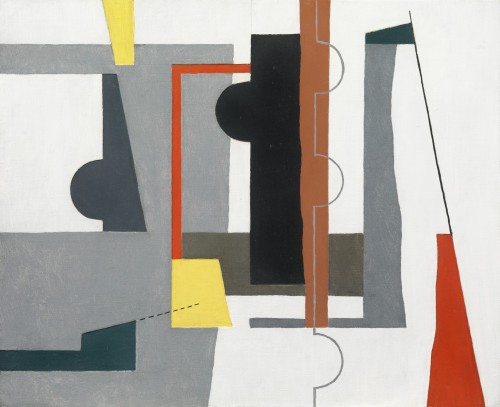 Oil and ripolin on canvas laid on board:

Dr Jeffrey Sherwin, acquired from the above

1935 is a significant date in the history of John Piper’s career. For some years before this he had wanted as an artist to express his affinity with the modern world. He had looked inquisitively at many things: at the painterly lyricism associated with 7 & 5 Society painting; at Picasso’s teasing use of collage; at Hans Arp’s string pictures; and at Braque’s habit of letting a line float free of its descriptive role so as to bind into a unity objects and space. That Piper was open to the new was evident. Yet his rapid assimilation of innovatory methods may have cast doubt as to whether he would ever attain a definite and distinctive visual language of his own. Then in 1933, for the New Statesman and Nation, he wrote a review of an Edward Wadsworth exhibition that caught the attention of Ben Nicholson. At a time when abstract art was almost totally disregarded in Britain, Piper singled out for praise Wadsworth’s abstracts: he likened them to clocks and revolvers – ‘they are composed of selected and unerringly arranged parts that make a working whole’.

With hindsight this description could also be applied to Forms on White Ground (1935) and to other of Piper’s abstracts produced in 1935. All have an enunciatory clarity, a startling confidence conveying, in Piper’s view, this is what painting needed to look like at this moment in time. To affirm this belief he sometimes included the date in the picture’s title, calling some of these works simply Painting 1935. Forms on White Ground, in its choice of colour for the ground, signals a debt to Mondrian, then regarded by the avant-garde as the leading exponent of international modernism.  Piper’s sudden arrival at the forefront of the English avant-garde also owes much to Ben Nicholson.

Two years before, Nicholson had in fact been vetting Piper as a potential new member of the 7 & 5 Society. By the spring of 1934 Piper had not only been elected a member of this society but also made Secretary and Chair of its Hanging Committee. In effect he had become Nicholson’s right-hand man. Made aware of Nicholson’s desire to make the 7 & 5’s annual exhibition in 1935 wholly abstract, in line with modernist developments taking place in France, Piper had gone to Paris in 1934, to catch up on contemporary art, and, once back in England, had immediately embarked on the making of abstract reliefs out of everyday materials, in a manner similar to the work of César Domela, whom he had met in France.  This summer he also encountered Myfanwy Evans, and, on hearing she too wanted to go to Paris, gave her an introduction to Jean Hélion, who gained her access to some of the most famous artists of the day – Kandinsky, Brancusi, Giacometti and Mondrian.

Encouraged by Hélion, Myfanwy decided to set up an English magazine, international in outlook and dedicated to promoting abstract art. Piper became its designer. By January 1935 they had starting living together in a near-derelict farmhouse at Fawley Bottom in Buckinghamshire, and here they produced the first issue of Axis. Here Piper moved away from the making of reliefs and began painting abstracts that upheld the ideals of rigour and purity which he had experienced in Paris. Yet many of these abstracts retain an element of relief, for, as in Forms on White Ground, the canvas has been laid on board so that parts of it can be cut away by razor and the gaps opened have been coloured, thereby giving additional richness, depth and complexity to the picture. Piper also liked the contrast between straight edges and full curves, and between matt oil paint and the shiny surface obtained by means of Ripolin, found here in the off-centre black form. He has deliberately limited his colour to a strong colour chord of red, citrus yellow, brown, a dim olive green, grey and black. It concentrates attention on the play of forms and the subtle shifts of direction. Piper had at last arrived at a distinctive personal style that signalled modernity, in the year that it became possible to fly to Paris.

John Egerton Christmas Piper was born at Epsom in 1903, the son of a solicitor. Educated at Epsom College, Piper joined the family firm as an articled clerk until his father’s death in 1925.  In 1926, having abandoned the study of law, he attended Richmond School of Art, transferring to the Royal College of Art, South Kensington in 1927. Though regarded foremost as a painter (elected a member of the Seven and Five Society in 1934), Piper was also a set designer for ballet and opera productions and for stained glass windows, as well as being an art and theatre critic.  He was also a masterful topographical draftsman with a passion for architecture, nurtured by his close personal and professional relationship with John Betjeman, with whom he collaborated on the Shell Guides to the British Isles. He was a valued member of the Royal Fine Art Commission for nineteen years, as well as a trustee of both the National and Tate Galleries. Piper met and became close friends with Benjamin Britten through writing for the Architectural Review, and worked with him on several musical productions. His first contact with the stage was in the 1930s with the Group Theatre Company. In 1937 he divorced his first wife Eileen Holding and married Myfanwy Evans. Piper volunteered for the RAF in 1940, but was instead commissioned by the War Artist’s Advisory Committee and was appointed Official War Artist in 1944. The work of John Egerton Christmas Piper is represented in Bolton Art Gallery, the National Museums and Galleries of Wales and Tate Britain, London.