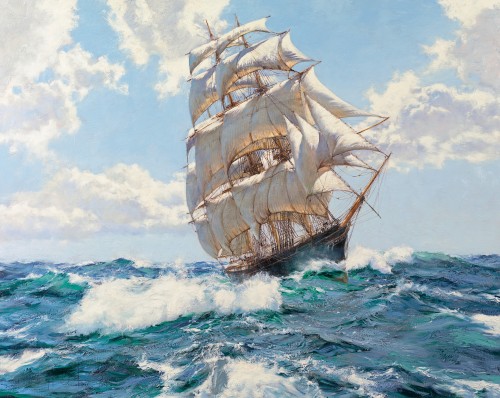 from whom acquired in October 1960 by a private collector, USA

by whom bequeathed to the Saint Louis Museum of Art;

deaccessioned by the museum in 2019

Montague Dawson depicts a clipper with all sail set, racing across the ocean with a cargo of tea or spices. The towering sail plan is emphasised by the low viewpoint, almost level with the choppy sea whipped into peaks of foam. Behind the vessel, clouds scud in a pale blue sky.

Dawson was fascinated by the elegant clippers, developed from the 1850s for strength and speed by famous shipbuilders such as Donald Mackay of Boston and William Steele of Greenock on the Clyde. Clippers were designed to carry high-value cargoes and sacrificed capacity for swiftness. Each spring the clippers went out to the Chinese ports – Foochow being the busiest – and waited for the tea to be brought down from the interior. The ‘Tea Races’ in which these élite vessels strove to be the first home with the new season’s cargo of tea caught the imagination of the press and of the world. Heavy wagers were laid on who would be home most quickly, and there was a premium paid in London for the freshest cargo. The only surviving clipper of this era, the Cutty Sark, is today berthed at Greenwich. In 1870 she made the voyage from Shanghai to Beachy Head in 109 days. 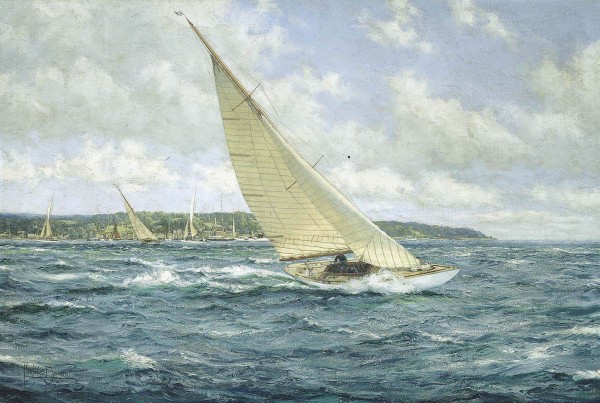