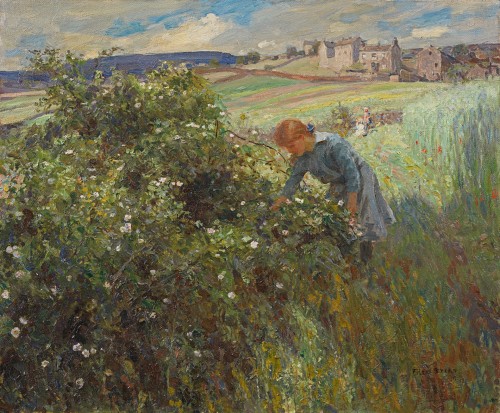 Avant-garde collecting in Britain in the late nineteenth century centred in West Yorkshire, Liverpool and Glasgow, and while the latter vied for the title, ‘Second City of the Empire’, the first, led by merchants in the cloth trade, focused upon some of the most modern tendencies in the art of the day. By the early 1890s, works by the current Paris Salon masters were arriving in the region, to be displayed in the private galleries of these enterprising mill-owners, Isaac Smith, John Maddocks, and the Mitchell family, depicted in Henry Herbert La Thangue’s The Connoisseur (fig 1).

Local artist networks were essential in encouraging these acquisitions, raising the standards of taste and creating a new and vibrant market. In 1886, for instance, the Arcadian Art Club was formed in Bradford under the presidency of La Thangue, one of the young radicals who had trained in the French ateliers.[1] Intent on reforming the Royal Academy, La Thangue was keen to import more democratic principles and practices from the Salon. Months before his Bradford club staged its first exhibition, he had been the most controversial exhibitor at the newly formed New English Art Club in London.[2]

How do we describe the character of work preferred by these northern collectors and the painters of the Arcadian club? Firstly, young artists and their West Yorkshire patrons rejected Ruskin and the Pre-Raphaelites of the mid-century. Progressive tendencies married Naturalism and Impressionism in the belief that the authentically modern would only be found in work produced in the open air, in dialogue with the fugitive effects of light. The rural took precedence over classical, historical or Biblical subject matter. This was the artistic milieu to which the twenty-five-year-old Fred Stead returned in the summer of 1888.

Born in August 1863, into a farming family at Baildon, on the outskirts of Bradford, the young Frederick Stead won prizes for drawing at Salt School, before attending evening classes at the Shipley School of Art, a regional centre for the delivery of the Government Art Training School curriculum.[3] In 1885 Stead received a scholarship to the National Art Training School (after 1896, the Royal College of Art) in South Kensington, where he again was a medallist.[4] His success led to a travelling scholarship that took him to France, Germany and Italy.[5] By July 1888 he was back in Yorkshire, exhibiting locally with the Yorkshire Union of Artists in Bradford and Leeds and selling his work.[6] With exhibitions in the cities of the West Riding and a growing reputation confirmed by his first Royal Academy exhibits starting in 1892, the stage was set for a successful career. By the turn of the century Stead was one of Bradford’s most important painters and his range included still-life, landscapes, figure pieces and portraits, at a time when the city established its new municipal art gallery.[7] Local pride and aesthetic judgement came together in the purchase of Poppies (fig 2) in 1909.

Painted around the same time as Poppies, Gathering Flowers (fig 3) arises from what was regarded as Stead’s best period. Writing in the first illustrated catalogue of the Bradford collection, Butler Wood, declared that the artist was ‘noted for the happy way in which he paints children in the fields and woods’ – words that were reiterated at the time of the artist’s memorial exhibition in 1940.[8] For a brief period straddling the Edwardian and pre-war years, the hillsides of West Yorkshire became a haven in which children wander freely, and innocence is equated with nature’s wild abundance. These nearby northern villages and farmsteads became the equivalent of Laura Knight’s resplendent Cornish fields in works like May Day (fig 4). However, where Knight’s sunlit south presents a world of stability, Stead’s Yorkshire uplands, with their tangled, overgrown shrubs and hedges, flower in a wilder environment.

The resonances, nevertheless, run deep. Stead had been one of the early visitors to Whitby and with his friends, Arthur H Rigg, Fred Jackson, Mark Senior, and Harold and Laura Knight he was well aware of the work of the nascent Staithes Group.[9] Yet by the beginning of the twentieth century he was more firmly rooted in his native Pennine foothills and moorlands, the drama of which he depicted with honesty and integrity. Here, in the wind-blown brambles, the village children go searching for wild flowers.

[7]               Cartwright Memorial Hall opened in 1904, and thereafter, Spring Exhibitions, featuring the work of key British and Foreign artists were held. Stead featured prominently in these exhibitions.