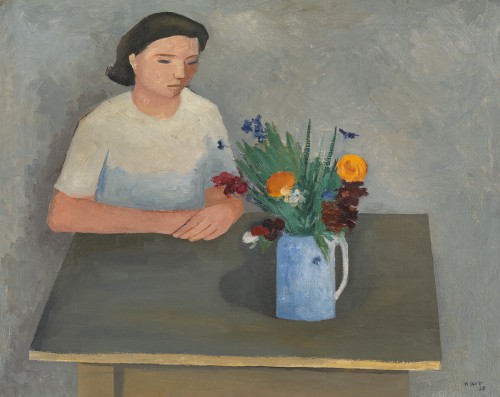 Girl seated at a table

Girl seated at a table

‘Mary and I had the opportunity of living in France and Italy just before the war, and it was in Pont-Aven that I felt I started to discover what I needed – and then the war came.’ William Scott[1]

William and Mary Scott had settled in Pont-Aven by June 1938, following their studies at the Royal Academy Schools and subsequent travels through Italy and France experiencing first-hand works by early Renaissance masters and the European avant-garde. Close to the south coast of Brittany, the Scotts were drawn to the former artists’ colony of Paul Gauguin and with artist Geoffrey Nelson, set up a summer art school, sponsored the following year by Augustus John, Walter Sickert, Sir Muirhead Bone and Albert Rutherstone. By the end of 1938, William had shown two works at the Salon d’Automne in Paris and had been nominated as a member.

Scott began painting Hilda Mary Lucas in 1934 shortly after they met and executed several seated portraits of her from life in 1938, the year after they married. In Girl seated at a table, previously in the private collection of David Bowie, Scott combines figure and still life painting, which would remain his chief interests, in a vibrant work of quiet monumentality. Scott depicts the sparse surroundings of the studio in low-toned soft greys enlivened by his expressive application of paint and the warm, almost orange-pink flesh tones of the figure and sun-bright flowers.