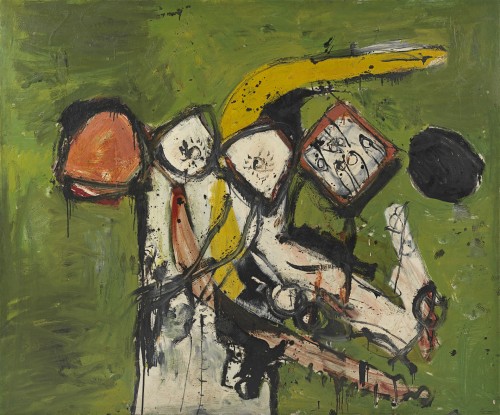 Goddess of the green

Goddess of the green

Edinburgh, The Arts Council Scottish Committee, Seven Scottish Painters: An Exhibition of Paintings by Seven Scottish Artists now working in London and the South of England, 1955, no.18

Princeton University, The Art Museum, The Stanley J. Seeger Jr. Collection, June 1961, no.55, (as Number Nine), illus. in the catalogue

In the early 1950s, Alan Davie began painting in series as a result of a process initiated in his brush drawings, such as Image of the Fish God, 1954 (Scottish National Gallery of Modern Art). The procedure involved the artist laying a dozen or so sheets of paper on the floor and making a similar mark or motif on each piece. He would then add further marks automatically in sequence, consistently altering the forms and their placement resulting in a group of drawings with a common vocabulary. Davie’s free and intuitive approach was influenced and encouraged by his interest in Zen Buddhism and Jungian psychology, whose notion of the collective unconscious involved a forgotten or repressed ‘archetypal symbolism’ which could only be accessed by giving free expression to the unconscious mind. Through this process of serial painting, Davie developed a number of symbols which reappeared during the 1950s including triangle and diamond shapes as well as figurative references.

At the beginning of the decade Davie painted mainly on masonite board and mixed his own paints in order to get a greater intensity of colour and the required fluidity to facilitate his quick, spontaneous application, occasionally adding sawdust to give texture. As the works got larger, he had to stand on the picture to get to the centre and as in the present painting, added his footprints to the finished work. As the artist described in relation to another work of the mid 1950s, Birth of Venus (Tate), ‘I must make it clear that the titles of my pictures are not meant to be taken literally but are in fact my own poetic interpretation of the work, thought up usually after the work is complete’.[1]

Davie’s international reputation grew throughout the 1950s and in 1956 he had his first one-man show at the Catherine Viviano Gallery in New York. As preparations for the exhibition were being made, Stanley Seeger visited the gallery and met with the owner and the artist Jackson Pollock. As Davie’s paintings were unpacked, Seeger and Pollock discussed them and Goddess of the green caught his eye. Pollock’s reaction, as recounted by Seeger, was instinctive ‘I know exactly what he means, push and pull, black and white, good vs bad’. Pollock’s evident awe as well as the vitality and immediacy of the painting convinced Seeger to buy it before the exhibition opened. It was the first of many works by the artist to enter his collection.

Other Works By
Alan Davie: 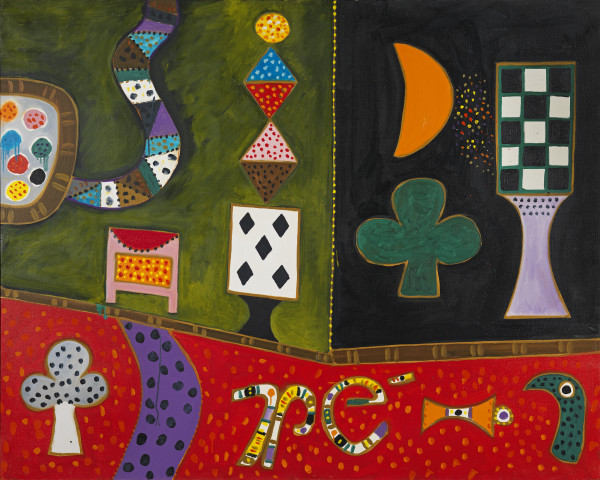