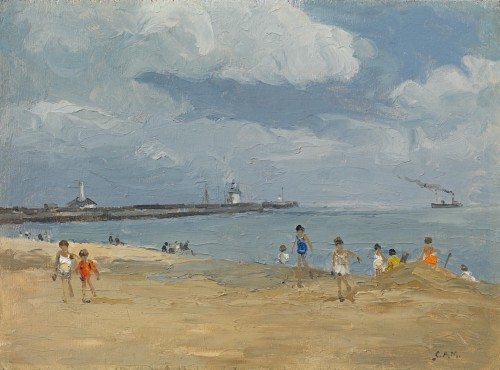 Signed with initials lower right: C. A. M.; inscribed with the previous owner’s name and address on the reverse

Private collection, Gorleston, acquired directly from the artist, then by decent

In this charming coastal view, Campbell A. Mellon documents the delights to be found at the seaside even on a cloudy day. Depicted on Gorleston Beach, with Gorleston lighthouse and NCI watchtower on the south Pier on the horizon, Mellon captures with impressionistic verve the warmth of the sun-dappled sand and cool of the blue/grey North Sea, enlivened with bright dashes of orange, blue, yellow and white bathing costumes. The artist moved to Gorleston-on-Sea in 1918 and depicted the beautiful village on the Norfolk coast many times throughout his career.

Campbell Archibald Mellon was an oil painter of landscapes and beach scenes. Born at Sandhurst in Berkshire on the 16th June 1876, Mellon’s family settled in Nottingham in 1903. He studied art under Carl Brenner, a nephew of B.W. Leader. In 1918 he moved to Gorleston in Norfolk where he studied under Sir John Arnesby Brown for three years and devoted the rest of his life to painting. In 1924 he first exhibited at the Royal Academy, showing a total of fifty works there over the years. He also exhibited at the Royal Society of British Artists and at the Walker Art Gallery, Liverpool, among others. He was elected a member of the Royal Institute of Painters in Oil in 1938 as well as a member of the Royal Society of British Artists. Campbell Mellon remained a resident of Gorleston-on-Sea until his death on the 28th August 1955.

Other Works By
Campbell A. Mellon: 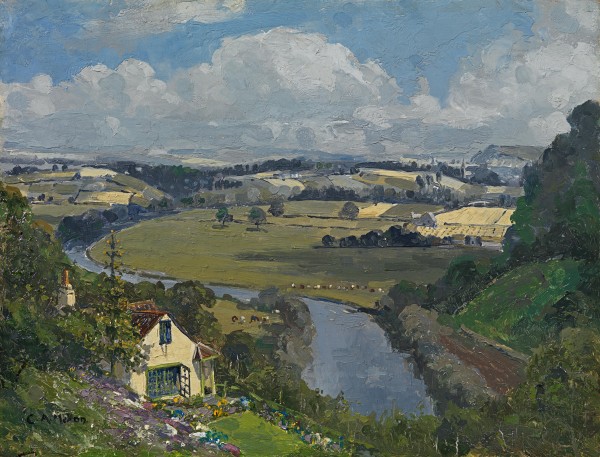