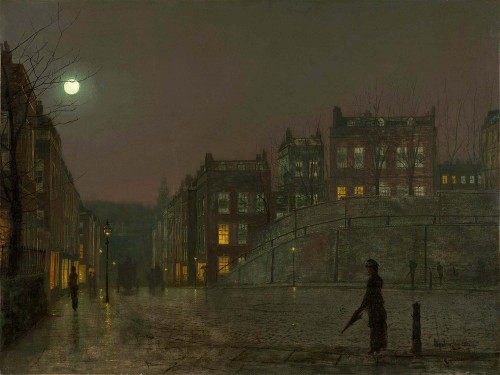 signed, dated and inscribed on the original reverse:

private collection, UK, 1996, acquired from the above

private collection, UK, 2007, acquired from the above;

Painted at the height of his powers in 1882, this iconic panorama combines Grimshaw’s favourite motifs, a rain drenched, moonlit lane, with the growing fashionableness of a Heath Street, Hampstead address. To date six paintings by Grimshaw of Heath Street have emerged, including three in public collections at the Victoria Gallery & Museum, Liverpool, the Department of the Environment and Tate Britain, London. The upper part of Heath Street was one of the original lanes leading into the village of Hampstead. In the Queen Anne period it was extended through the village onto the Heath and beyond. Heath Street was lengthened in the 1887 to 1889 Hampstead Town Improvements to link it with the new Fitzjohn’s Avenue. Heath Street was home to a celebrated literary meeting place, the Upper Flask Tavern. The famous Kit Kat Club, named after a pastry cook called Christopher Katt, met for twenty years in the homes of its founder Jacob Tonson, Katt and the Upper Flask Tavern. Its members included the leading figures of artistic and Whig circles in 18th century London including the Duke of Marlborough, Sir Robert Walpole, Sir John Vanbrugh, Joseph Addison, Sir Richard Steele, the playwright William Congreve and the painter Sir Godfrey Kneller. Samuel Richardson set part of his famous novel Clarissa in the Upper Flask Tavern. Heath Street has always been at the heart of Hampstead Village’s entertainments. Other famous landmarks include the Drill Hall where, when renamed as the Everyman Theatre, Noel Coward first performed Vortex in 1919.

John Constable (1776-1837) painted Hampstead in the early nineteenth century, initially renting a cottage for the health of his wife and children from 1819 to 1834. A semi-rural village at the time, Hampstead united town and county life, connected to central London by a regular coach service, which Constable depicted in London from Hampstead Heath (Manchester Art Gallery). Constable also exhibited a moonlit painting of Hampstead at the Royal Academy in 1832 (286). Ford Maddox Brown (1821-1893) moved to Hampstead in 1852 and painted two important paintings there at the culmination of his Pre-Raphaelite period: An English autumn afternoon, 1853 and Work, 1852-65. The latter, and its replica (now in Birmingham and Manchester Art Galleries), were painted over the course of fifteen years and depict The Mount with Heath Street on the right looking north with great topographical accuracy. It seems likely that Grimshaw would have seen Work, its completion was commissioned by stockbroker and collector, Thomas Plint of Leeds and it was exhibited there in 1868 (see Mary Bennett, Ford Maddox Brown, A Catalogue Raisonné, volume 1, Yale University Press, 2010, pp.136, 148). Bennett writes that The Mount is much the same as it appears in Brown’s study of Heath Street, though ‘higher up the street is now largely shops and the railings on The Mount are different’ (ibid., p.148). Though Grimshaw’s view looks south down Heath Street towards London and what might be the spires of Heath Street Baptist Church or the tower of the old fire station, it seems likely that the railings to the right also depict those rising up The Mount, albeit with some artistic licence.

Born in Leeds, the son of an ex-policeman, Grimshaw first took up painting while he was employed as a clerk for the Great Northern Railway.  He married his cousin Frances Theodosia Hubbarde in 1858 and by 1861, he had abandoned his job in order to devote all his time to becoming an artist.  In his early work, John Atkinson Grimshaw was influenced by John Ruskin’s creed of ‘truth to nature’ and adopted the detailed Pre-Raphaelite technique of the Leeds painter, John William Inchbold.  He was also fascinated by the relatively new art of photography and may have used a camera obscura in developing his compositions.  Towards 1865, he renounced this painting style.  He painted many urban scenes in which moonlight and shadows were the most striking features.  The towns and docks that he painted most frequently were Glasgow Liverpool. Leeds, Scarborough, Whitby and London.  These works have become his best known though he also painted  landscapes, portraits, interior scenes, fairy pictures and neo-classical subjects.  Grimshaw painted mostly for private patrons.  He only exhibited five works at the Royal Academy between 1874 and 1876. 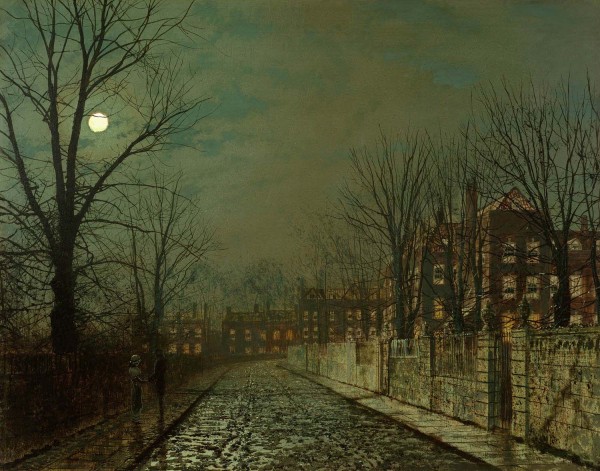 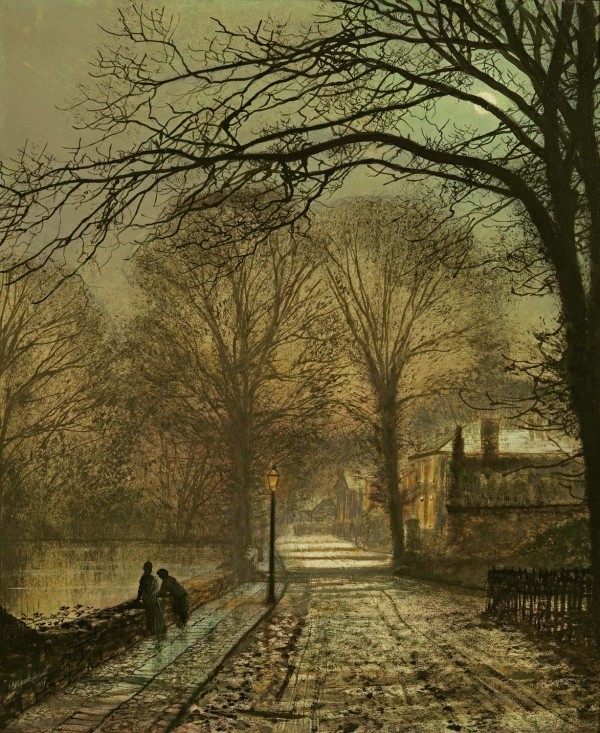 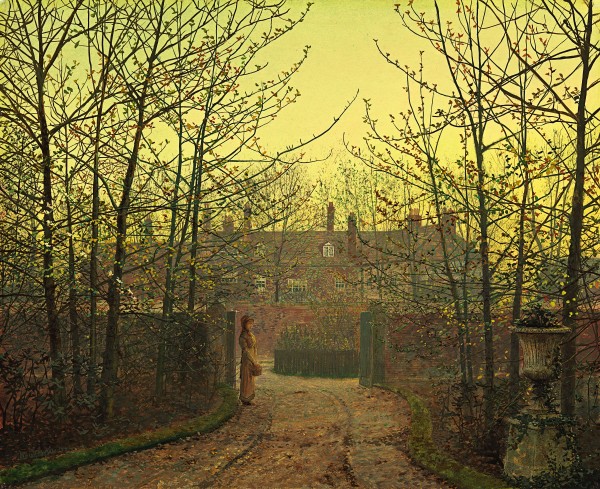 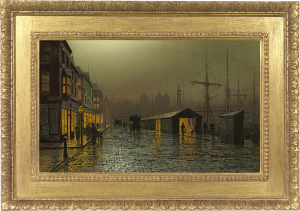