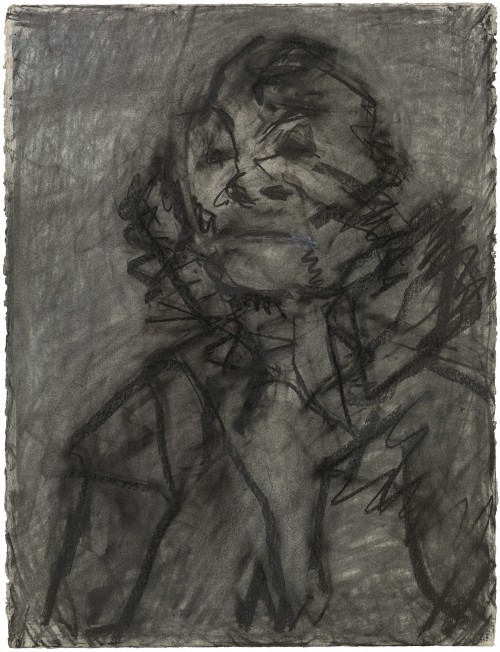 ‘JYM has been sitting for me twice a week for almost thirty years, first as a “life model” then, with the passing of time, as a friend; latterly mainly for portraits. JYM is an acronym of her name, she is known as JYM to her friends’ (Letter to Whitworth Art Gallery, 28th February 1986). Juliet Yardley Mills was a professional model whom Auerbach met in 1956 while she was working at the Sidcup School of Art. She went on to sit for Auerbach every Wednesday and Sunday until 1997. Mills described their rapport in the catalogue for Auerbach’s retrospective at the Royal Academy in 2001: ‘We had a wonderful relationship because I thought the world of him and he was very fond of me. There was no sort of romance but we were close. Real friends’ (Frank Auerbach: paintings and drawings 1954-2001, exhibition catalogue, Royal Academy, London, 2001, pp. 26-7).

Frank Helmut Auerbach was born on the 29th April 1931, to Max Auerbach and Charlotte Nora Burchardt.  In 1939 Auerbach was sent to school in England with five other children, sponsored by the writer Iris Origo.   After boarding the ship in Hamburg, he never saw his parents again.  The school, Bunce Court at Lenham, near Faversham, Kent, was evacuated to Shropshire from 1940-45.  Having left school with a Higher School Certificate in 1947, Auerbach acted in plays at the Tavistock, Torch, Twentieth Century and Unity Theatres, where he met Estella West.  He also attended painting classes at the Hampstead Garden Suburb Institute.  In 1948 Auerbach enrolled at the Borough Polytechnic Institute, where he studied for two terms before starting at St Martin’s School of Art in September, where he met Leon Kossoff and Phil Holmes.   He continued to go to drawing classes at the Borough Polytechnic, taught by David Bomberg, two evenings a week throughout 1954.

Declared unfit for the army, Auerbach continued his studies at the Royal College of Art from 1952-55.  In 1954 he moved to Kossoff’s studio in Camden until his marriage to Julia Wolstenholme, another student of the Royal College, in 1958.  Auerbach left the Royal College in 1955 with a silver medal and first-class honours.  He exhibited at the Beaux Arts Gallery summer exhibition and then held a one-man show there in 1956.  He taught in secondary schools and then at various art colleges, including Camberwell and the Slade, one day a week until 1968.  Auerbach first exhibited at Marlborough Fine Art, London in 1965 and has continued to show at its associated galleries.

In 1978 the Arts Council of Britain held the first retrospective of Auerbach’s work at the Hayward Gallery.  Frank Auerbach Paintings and Drawings 1977-85 was held in the British Pavilion at the XLII Venice Biennale, June-September 1986.  He was awarded the Golden Lion prize along with Sigmar Polke.  In 1990 Robert Hughes published his monograph on the artist.  In 1995 an exhibition based on drawings made from works in the National Gallery’s collection was presented, entitled Frank Auerbach at the National Gallery: Working after the Masters.  In 2001 an exhibition of Auerbach’s paintings and drawings from 1954-2001 was held at the Royal Academy, London.