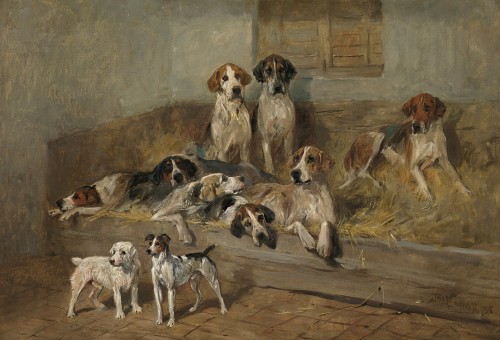 Endowed with artistic talent, equestrian accomplishment and social grace, John Emms had a flourishing career painting horses, hounds and dog portraits, travelling extensively around the country. This painting, in his fluid and lively mature style, reflects his understanding of dogs’ physique and personalities, as well as his affection for these animals. A favourite theme in his works, this stable interior depicts the harmony and companionship of an off-duty foxhound pack, the languor of the big dogs contrasted with the ever-alert terriers, used for rodent control and for digging out fox earths.

This painting comes from the collection of Susan Lyall at Little Cassiobury, Bedford Hills, New York. An English Georgian-style country house, Little Cassiobury was built by its previous owner, Mrs Harriet Hooper, from bricks and wood panelling saved from the demolition of the 7th Earl of Essex’s Cassiobury Park, Hertfordshire, in 1927. Both owners created elegant English-style interiors for Little Cassiobury. Susan Lyall, who had previously lived in England at Swinbrook House, the former home of the Mitford sisters, collected eighteenth century English furniture and British pictures, including works by Sir Alfred Munnings and Sir John Lavery.

John Emms was born at Blofield, Norfolk, the son of the artist Henry William Emms. An interest in art took him to London and for some time he worked as Frederick, Lord Leighton's studio assistant. Emms helped Leighton to execute the fresco of The Ten Virgins in Lyndhurst Parish Church, adding the owl, a symbol of Sloth. From 1866 onwards, Emms exhibited at the Royal Academy, Suffolk Street and various other venues. In 1875, the London exhibition entitled The Beauties of the New Forest included three of his paintings. He returned to Lyndhurst in 1872.

Endowed with artistic talent, equestrian accomplishment and social grace, Emms rapidly acquired a large clientele and was commissioned to paint horses, hounds and dog portraits, often travelling extensively around the country. In 1880, he married Fanny Primmer, the daughter of a Lyndhurst gentleman; after the marriage they settled in London. He returned to Lyndhurst in 1881 and built a large house and studio named The Firs, where he remained for the rest of his life.

Emms was an artist of considerable ability; his early works were painted with precision and the use of glazing; he later developed a more fluent and direct approach, using a more limited palette.  He was a prolific painter and was admired for the vitality of his animal portraits and his depiction of dogs.