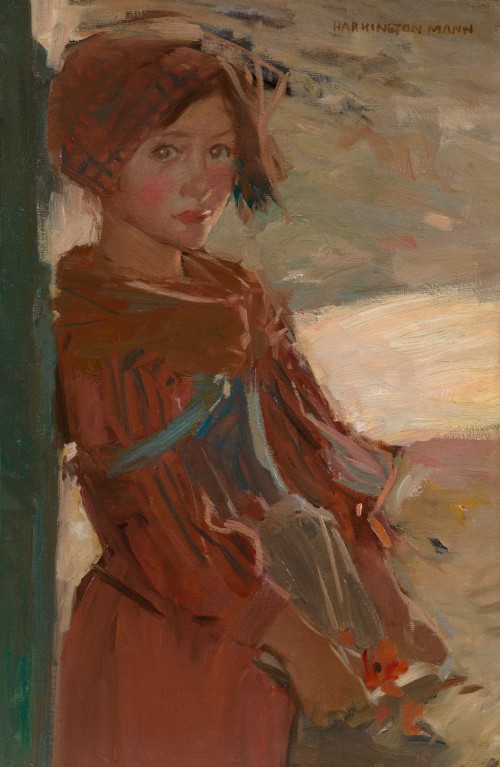 As a student of the Slade School of Art, London from the age of 15, Harrington Mann obtained a Travelling Scholarship which he spent in Italy from 1887-89. According to the English Illustrated Magazine,[1] Mann spent most of his time in Rome, but visited several other towns of art historical significance including Florence and Venice during his stay, sending illustrations of his travels to the Scottish Art Review[2]. While the style of these wash drawings differed from his exhibited oil paintings of this date, Mann continued to produce rural scenes of everyday life recorded directly from nature, as the Glasgow Boys, Sir James Guthrie (1859-1930), Edward Arthur Walton (1860-1922) and Edward Atkinson Hornel (1864-1933) had done the decade before. Having returned to Glasgow following further studies in Paris, Mann exhibited these pastoral paintings, often referring to his Italian journey, at The Royal Scottish Academy, Edinburgh and the New English Art Club, London.[3]

Like Guthrie’s A hind’s daughter, 1883 (Scottish National Gallery, Edinburgh), the present work vividly records a healthy peasant girl whose outdoor work has been temporarily suspended by the artist. The directness of her gaze and upright posture speak to the dignity of her labour, the rich, earthy colouring of her complexion and costume connecting her inextricably with the landscape. The impressionistic, broadly painted setting, which seems to suggest an uneven, grass covered hillside, acts merely as a foil to the peasant child, throwing her figure into relief and enhancing the depth and luminosity of her colouration. Even at this early stage of his career, Mann’s sense of colour contrast and harmony is superb. His use of dark blue/green to describe the shaded cottage doorway against which she stands, as well as the bib section of her apron, whose strap falls across her right arm, is skilfully intensified by its juxtaposition with the red/brown umber of her dress, bonnet and flesh-tones. Though not directly illuminated, the soft, warm sunlight on the cottage exterior and the bright diagonal path which divides the landscape, cast naturalistic golden highlights on the child’s face and articulate the silhouette of her garments. Her sun-burnt hands seem to hold up her apron containing vermilion poppies or anemones, slightly brighter, but still in harmony with her dress. Mann’s drawing and design is equally accomplished, the naturalness of his protagonist’s pose and bold, alla prima technique, seemingly as raw and rustic as the peasant girl, disguising the sophistication and refinement of his composition.

This outstanding work seems to capture Mann’s transition from rural study to characterful portrayal, prefiguring his success as a fashionable society portrait painter with studios in London and New York. Mann would also write a treatise on the subject, The Technique of Portrait Painting, published in 1933.

We are grateful to Professor Kenneth McConkey for his assistance with the cataloguing of this work.

This painting comes from the collection of the traveller and photographer Sir Geoffroy William Millais, 4th Bt. (1863-1941), sixth of the eight children of the Pre-Raphaelite painter Sir John Everett Millais and his wife Effie. It has descended in the Millais family.

Harrington Mann established his reputation as a portrait painter of international fame, though he also painted landscapes, marine and historical subjects. His success and clientele in the United States was significant enough for him to maintain a house in New York as well as his native Britain. The son of a chartered accountant, Mann had an equally international education studying first at the Glasgow School of Art and continuing at The Slade School of Art in London from 1880 under the direction of Alphonse Legros (1837-1911). While a student at the Slade, Mann won an Travelling Scholarship which he spent in Italy from 1887-89, after which he visited Algiers, Tangier and Spain before further studies in Paris as the pupil of Gustave Boulanger (1824-1888) and Jules Joseph Lefevre at the Académie Julian. Mann returned to Glasgow[4] and worked as a designer for JW Guthrie (now Guthrie and Wells) during the 1890s, producing designs for stained glass windows at Trinity Church, Claremont Street in 1893. He also designed murals on the theme of Scottish Song for the Ewing Gilmour Institute for Girls at Alexandria in the Vale of Leven, Dunbartonshire, which housed the workers at the Turkey Red Dye Factory (c. 1888). Mann also drew illustrations for The Daily Graphic and The Scottish Art Review. The subject matter of his paintings at this time ranged from Yorkshire fisherman to large historical scenes such as The attack of the MacDonalds at Killiecrankie, 1689.

While associated with The Glasgow Boys in the 1880s (he was certainly good friends with John Lavery, whose portrait and that of his daughter Alice he painted), Mann was on the periphery rather than a full member. He was, however, a member of The Society of Eight[5].

In 1900, Harrington moved from Glasgow to London and began to concentrate on fashionable society portraits, including members of the Royal Family. He particularly excelled at painting children’s portraits. Having spent several profitable seasons in America, Mann began to divide his time between London and New York, setting up a second studio there in 1910. As well as writing an unpublished autobiography, Mann wrote a comprehensive guide to The Technique of Portrait Painting which was published in 1933.

[2] ‘Mr Harrington Mann. An Appreciation’, The Artist, August 1897, p. 364. ‘Particularly good were his Italian sketches, where he gave, perhaps, the first evidence of his grip of character, his taste in selection, and his talent in drawing.’

[5] Formed in Edinburgh in 1912, the Society of Eight included P.W. Adam, David Alison, F.C.B. Cadell, James Cadenhead, James Paterson, John Sinclair and Sir John Lavery as well as Harrington Mann. William Hardie describes them as a group of ‘united artists who all tended to adopt a painterly approach and to use a light-keyed colour.’ W Hardie, Scottish Painting 1837-1939, Studio Vista, London, p. 100.