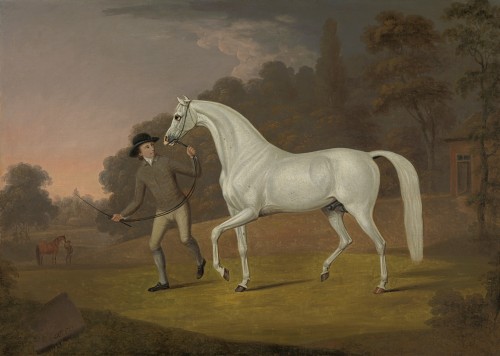 Thomas Springer specialised in equestrian portraits and hunting subjects, painting many commissions for the gentry of Cheshire and Lancashire. He is said to have begun life as a servant to Peter Legh (1727/8-1804) of Booths Hall in Knutsford, but after an argument with his employer left to pursue a full-time career as an artist. He was ‘much encouraged by the neighbouring gentry, especially for his portraits of horses, in which he evinced uncommon skill’[1]. This painting of a magnificent grey stallion reflects his vigorous yet delicate observation of horses, with clear outlines and the animal shown in noble profile. It suggests that he was aware of the work of fellow Northerner George Stubbs (1724-1806).

Marbury Hall came into the possession of the Barry family through Lady Elizabeth Savage (d.1714), daughter of Richard Savage, 4th Earl Rivers (c.1660-1712) and his wife Penelope Downes. She married, as his second wife, Lieutenant-General James Barry, 4th Earl of Barrymore (1667-1748), a soldier in the service of William of Orange and a keen aficionado of the Turf. The Barry family also had large estates around Fota Island in County Cork.

James Hugh Smith-Barry (1748-1801), the grandson of the 4th Earl of Barrymore, inherited Marbury from his uncle Richard Barry (1721-1787), although he mostly lived at nearby Belmont Hall. He made a Grand Tour to Italy, Greece, Constantinople and Egypt from 1771 to 1776, returning from England to Italy in 1779. A friend of the antiquary Charles Townley, Smith-Barry built up an extravagant collection of classical sculpture, with many objects acquired from the Rome-based painter-dealer Thomas Jenkins. They include the Jenkins Vase (National Museum of Wales, Cardiff) and a seated Zeus from the Villa d’Este (J Paul Getty Museum, Malibu), for which Smith-Barry paid £600[2]. Smith-Barry also spent lavishly on paintings by Tintoretto and other Italian masters, until his father’s bankers nipped his enthusiasm in the bud. By 1815 there were 325 paintings and more than sixty antiquities displayed at Marbury Hall. The early eighteenth century house was redesigned by Anthony Salvin in the 1850s and demolished in 1968.

Thomas Springer specialised in equestrian portraits and hunting subjects, painting many commissions for the gentry of Cheshire and Lancashire. He is thought to have begun life as a servant to Peter Legh (1727/8-1804) of Booths Hall in Knutsford, but after an argument with his employer left to pursue a career as an artist[3]. In 1749 he was paid for painting the rules to be hung in the ringing loft of St John’s church. Stringer married Mary Boulton, daughter of a wealthy dyer, and was well established as an equestrian painter by the mid-1760s.

Stringer habitually signed his works with his initials TS: the long, eighteenth century T has led the initials to be read as FS and Stringer’s paintings to be confused with those of Francis Sartorius (1734-1804), who occasionally worked in Cheshire, but does not sign with initials.

Springer painted the Earl of Stamford’s harlequin Great Dane, Turpin, in 1769 (Dunham Massey Hall, Cheshire, National Trust) and a chestnut hunter of Thomas Egerton, 1st Earl of Wilton, of Heaton Hall. He made several paintings for George Heron of Daresbury Hall, Cheshire around 1776, and worked for Viscount Bulkeley of Poynton Hall. Two of Stringer’s sons became painters: the landscapist Samuel (1750-1787) and the portraitist Daniel (1754-1808).

[3] The most complete biography of Stringer is by Marjorie Carnie in Essay 37, British Sporting Art Trust, Winter 1999/2000.