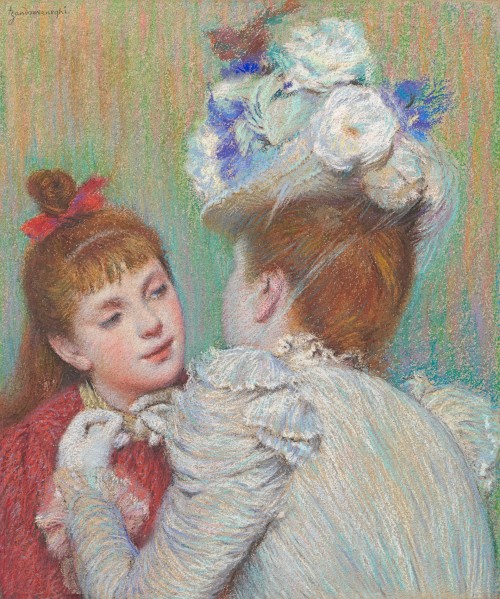 In a Louis XV style carved and gilded pastel frame

by descent in the family of Paul Durand-Ruel

Forced to leave his native Venice because of his involvement with the freedom campaigns of Giuseppe Garibaldi, Federico Zandomeneghi arrived in Paris in 1874 and stayed there for the rest of his life. Passionate and outspoken, he was drawn into the orbit of Edgar Degas (1834-1917) and the other artists who met at the Café de la Nouvelle-Athènes. Although they had their disagreements, Degas was probably Zandomeneghi’s closest mentor in Paris. He wrote to a friend after Degas’s funeral: ‘He was the most noble and independent artist of our epoch….I will never forget the great friendship which bound us for many years’[1].

Like Degas, Zandomeneghi made art from the lives of ‘modern urban women’, observed without narrative or moral comment in moments of intimacy or privacy – bathing, chatting with friends, taking tea, glancing in the mirror before they set off for a play or a ball. He became a superb exponent of the pastel medium, also favoured by Degas.

In this pastel, a young mother adjusts the ribbon of her daughter’s dress as they prepare to go out. The work reflects Zandomeneghi’s exquisite sensitivity to colour, a reminder that he grew up in the city of Bellini, Titian and the pastellist Rosalba Carriera. The young woman is a vision in cool colours – white and blue – which set off her striking ‘Titian’ hair. Zandomeneghi strokes lines of pale blue, buttermilk yellow and pearly pink into the fabric of the woman’s dress, breaking down the white into the colours that lurk within its shadows. The child, also red-haired, makes a vivid contrast with her mother in her red dress and glowing red ribbon, her rosy cheeks set against her mother’s porcelain paleness. The pair is framed against a shimmering background of blue-green, which serves to emphasize their affectionate intimacy.

Zandomeneghi was not alone in exploring the lives of modern women. Degas, especially in his late pastels, cast an unerotic, forensic eye over women bathing and dressing. The three women artists most influenced by Impressionism, Manet’s only pupil Eva Gonzalès (1849-1883), his friend Berthe Morisot (1841-1895) and Mary Cassatt (1844-1826), made the lives of women and children the focus of their work. They share with Zandomeneghi an emphasis on physical closeness, of touch and affectionate gesture. Morisot’s Night-time toilette, 1886 (Frye Art Museum, Seattle)[2] depicts a woman fastening the neck of a child’s nightdress; Cassatt’s print The banjo lesson, c.1893 (National Gallery of Art, Washington DC)[3] shows a child leaning on her mother’s shoulders as she plays. Zandomeneghi’s women clasp hands as they chat (Conversazione, 1895; private collection)[4], or they tenderly embrace (Figure femminili; private collection, Bergamo)[5], echoing the demonstrative warmth of Italian family life that the artist would have experienced growing up in Venice. The motif of attaching a ribbon is explored in two of his oil paintings, both depicting two adult women, Il nastro di velluto (private collection, Gallarate)[6] and Préparatifs pour le bal (private collection)[7].

Jeune femme attachant un ruban also reflects Zandomeneghi’s interest in bourgeoise fashion, something that he shared with fellow-pastellist Paul-César Helleu (1859-1927). The mother’s elegant chignon and her straw hat, topped with a froth of flowers and feathers, as well as the ruffled sleeves of her summer dress, are what gives the pastel its exuberance.

The work was bought in 1900 by Paul Durand-Ruel (1831-1922) and has descended in his family collection. The influential dealer, who made the careers of many of the Impressionists, including Monet and Renoir, championed Zandomeneghi from the 1890s and in 1893 and 1898 held one-man exhibitions of his work in Paris. He also promoted the Venetian to American collectors, who delighted in his sophisticated figure compositions.

Federico Zandomeneghi was a painter of realist landscape and genre, whose early career was spent in Florence as an associate of the Macchiaioli, before he moved to Paris and fell under the spell of the Impressionists. The Zandomeneghi family included a number of leading Venetian artists. Federico’s father and uncle, followers of Canova, were the sculptors who created the monument to the great Venetian painter Titian in the Church of Santa Maria Gloriosa dei Frari.  This family heritage exerted an influence upon Federico Zandomeneghi, but he was most inspired by colour and thus decided to become a painter rather than a sculptor. He enrolled at the Accademia de Belle Arti in Venice 1856, where he studied under Molmenti and Grigoletti.  However, in order to avoid being drafted into the army of the occupying Austro-Hungarian Imperial forces at the age of eighteen, he fled to Pavia where he enrolled in the University.

In 1860 Zandomeneghi took part in Garibaldi’s Expedition of the Thousand to liberate Sicily and was imprisoned when he returned to Venice. His father managed to arrange for Zandomeneghi’s release, but the young Federico was forced to abandon his beloved Venice forever. He settled in Florence in 1862, where he came into contact with the Tuscan Macchiaioli group of painters, who adhered to the principle of plein-air painting, with a particular emphasis on the contrasting effects of light and shadow.

In 1874 Zandomeneghi moved to Paris where he would remain for the rest of his life. A familiar face at the Café de la Nouvelle-Athènes, he frequented the Impressionist circle. Zandomeneghi and Degas formed a particularly intimate though turbulent friendship which would last until their deaths in 1917. In a popular anecdote Degas, notorious for his brittle manner, is reputed to have asked Zandomeneghi to sit for him, ‘as he had nothing better to do’. Zandomeneghi’s retort: ‘one does not speak to a Venetian like that’, reveals not only his immense pride in his native artistic heritage but also that these two curt temperaments, who played such a formative part in late nineteenth century French art, were well matched. ‘Zando’ also became acquainted with Renoir, Pissarro and Sisley. Degas’s insistence encouraged Zandomeneghi to participate in the ground-breaking Impressionist exhibitions of 1879, 1880, 1881 and 1886. The art critic and Decadent novelist Joris Karl Huysmans heralded Zandomeneghi’s talents in a rare moment of warmth: ‘The Independents have found in that conscientious artist, Federico Zandomeneghi, a precious recruit’. The discerning dealer Paul Durand-Ruel championed his art from the 1890s.

During the latter part of his career, Zandomeneghi became deeply attached to the medium of pastel, favouring it over oils for its tonal range of colour and soft, luminous effects. He found it particularly evocative in capturing the delicate beauty of the Parisienne. The impact of both Renoir’s passionate female nudes and Degas’s acerbic yet insightful glimpses of modern women bathing, rehearsing and chatting in cafés, homes or brothels is clear. However, Zandomeneghi imbued his studies of women with a greater sense of serene and chaste calm.