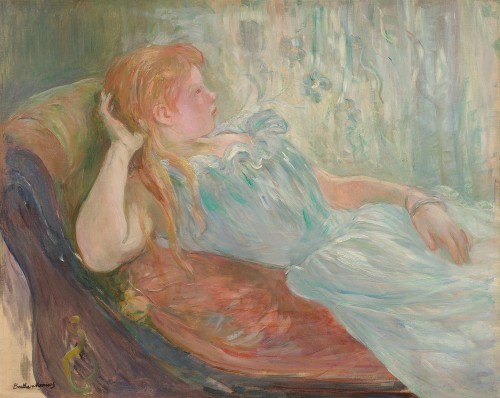 In a period, carved and gilded Louis XIV frame

In Jeune fille étendue Berthe Morisot portrays an enchanting scene of a young girl reclining on a sofa absorbed in a daydream. The reflective nature of this painting is highly characteristic of Morisot’s later period, when she painted solitary, beautiful young women in the rooms of her new apartment on the rue Weber in Paris. ‘In the summer of 1893 Morisot hired one of Renoir’s models to portray such reverie more explicitly than ever before. Posed in a white dress that registers every coloured nuance of the ambient light, the model reclines on an Empire chaise longue decorated with a swan’s neck motif. Resting her head on her right hand, she looks off at nothing in particular, perhaps dreaming of a different time or place…’ (exh. cat. Berthe Morisot – Impressionist, op. cit., p.163).

The blonde model is Jeanne Fourmanoir; this is the largest of three related images that Morisot painted of her in the drawing room of her home. Morisot executed a closely-cropped preliminary pastel drawing for Jeune fille étendue to refine the model's features. The full-length version, entitled Sur la chaise longue (Clairet et al., no.355; private collection), provides a setting for the daydreaming woman and reveals the object of her attention: a painting of the artist’s daughter, Julie, playing the violin.

In her later years Morisot had become skilled in creating poetic images of beautiful young girls gazing out of a painting, as if in deep contemplation. Stuckey and Scott comment: ‘Although Morisot’s art often portrayed her immediate surroundings, family members, and friends, the goal of her ostensibly mundane pictorial ideas was to record the experience of reverie that transcends routine appearances’. In the present painting, Morisot departs from her earlier portrayals of women in a variety of domestic scenes. As her choice of subject matter evolved in the 1890s, her approach became less formal. Her application of paint was smoother, the line strengthened and the contours more defined.

An artist of remarkable depth and skill, Berthe Morisot sought throughout her life to record the beauty and fragility of life. She once said: ‘My own ambition was limited to wanting to capture something of what goes by, just something, the smallest thing’. Jean-Marie Rouart defines her legacy thus: ‘To the light of Impressionism, Berthe Morisot added that of happiness; the kind of happiness that seems to belong to a paradise lost, with its harmony, sweetness and gracefulness…In her vision, there is the desire to break with Realism in favour of the illuminations and enchantments which light up the everyday, without giving into the mundane which weighs so heavily on existence’ (Berthe Morisot, catalogue raisonné de l’oeuvre peint, 1997, p.10).

Berthe Morisot was the first woman to join the Impressionists, sharing their aims and contributing to their principal exhibitions. The early interest she and her sister Edma took in drawing was encouraged by their parents, who sent them to study with Joseph Alexandre Guichard, a pupil of Ingres. Under his tutelage, they copied works in the Louvre.

By 1860, Morisot had already expressed an inclination to paint en plein air and in 1861 she was introduced to Corot, from whom she took lessons and by whom she was considerably influenced. She worked with him in Ville d’Avray and later with his pupil Oudinot at Auvers, where she encountered Daubigny and Daumier.

In 1868 Morisot met Edouard Manet, who was to become a close friend and colour her entire life. She married his younger brother Eugène in 1874 and that same year sent nine pictures to the first Impressionist exhibition. The artistic ambience in which Morisot lived was of great importance to the development of her work and her friends included Degas, Monet and Renoir, musicians such as Rossini and Chabrier, and the greatest writers of the day, Zola, Baudelaire and Mallarmé.

During the latter part of her career, Morisot showed a renewed interest in drawing, as a fundamental process of modelling and emphasizing the plasticity of her subjects. She now adopted a style composed of long, sinuous strokes as a means of giving linear definition to form.