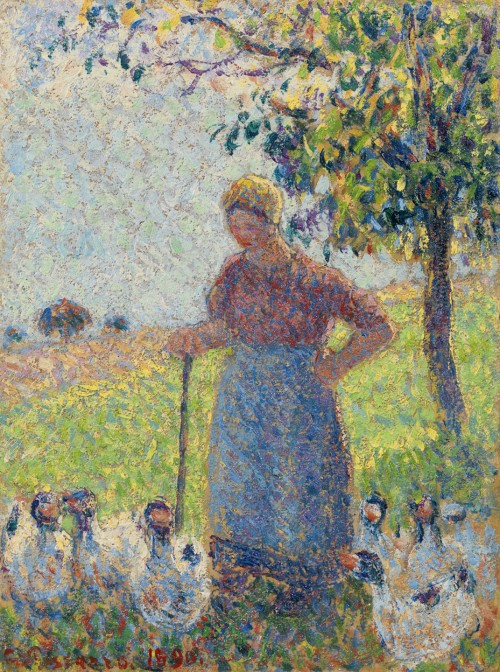 In an antique Louis IVth carved and gilded frame

by descent to the late Patrick Henry, Jr.

Ludovic-Rodo Pissarro, notes for a supplement to the catalogue raisonné of his father’s works (recorded in Pissarro and Durand-Ruel Snollaerts, p.588)

Camille Pissarro made six oil paintings on canvas on the theme of the goose girl between 1876 and 1900, as well as a number of works on paper[1]. It fitted with his interest in the rural tasks that took place round his property in Eragny, with the advantage of being an activity carried on near the house, by countrywomen who had some leisure to pose. Pissarro commented ‘I don’t want my geese to look like the real geese one puts in official genre scenes and illustrations, not Japanese ones either. I conceive them as being unpolished, ornamental, complements to the composition, that’s all, but above all alive’[2].

This small, jewel-bright painting reflects the renewed energy which infused Pissarro’s work after he abandoned his three-and-a-half-year experiment with Neo-Impressionism in 1890. Always open to new ideas, Pissarro became fascinated with the theories of his much younger contemporaries George Seurat (1859-1891) and Paul Signac (1863-1935), who juxtaposed dots of paint according to a strict optical method so that complementary colours would blend in the eye of the beholder. A brilliantly instinctive painter, Pissarro ultimately found this technique too constraining, bewailing ‘the impossibility of pursuing the altogether varied effects of nature….I wasn’t made, it would seem, for this art, which gave me the sensation of the levelling down….of death!’[3]

La gardeuse d’oies vividly exemplifies Pissarro’s supple technique and mastery of composition as well as the boldness with colour that he had learned from his Neo-Impressionist phase. The goose girl is a calm, Junoesque figure, standing in the dappled shadow of a tree with her head enveloped in a halo of sunlight. Her silhouette has the simplicity and grace of a Greek caryatid. She links the delicious cool of the foreground with the pulsating light of the summer landscape, its sky composed of melded dabs of duck-egg-blue, eau-de-nil and pink, the meadow formed from touches of sulphur yellow, emerald and pea-green. Pissarro weaves complementary colours into the girl’s clothes, her pink blouse being given life by a network of blue brushstrokes which tone with her blue apron and skirt.

The geese crowd noisily into the foreground of the painting, ‘unpolished, ornamental’, full of vigour. Their white bodies light up the base of the composition, contrasting with the shadowed grass which the artist has rendered with lavish dabs of blue, red and green, and his own signature, which is in a bold cherry-red. Pissarro has made a work which evokes his unsentimental delight in the timeless rhythm of the agricultural world, and which has a grandeur which belies its comparatively small size.

Camille Pissarro was perhaps the greatest propagandist and the most constant member of the Impressionists and the only one to participate in all eight of their exhibitions. Born in 1830 in the Danish colony of Saint Thomas[4] in the West Indies, of Sephardic Jewish parentage, he went to school in Paris and then worked in his father’s business for five years. Ill-suited to being a merchant, Pissarro decided to become a painter, studying at the Ecole des Beaux Arts and the informal Académie Suisse. He was considerably influenced and encouraged by Corot and to a lesser extent by Courbet.

In 1885 Pissarro came into contact with Seurat and Signac and for a brief period experimented with Neo-Impressionism. The rigidity of this technique, however, proved too restrictive and he returned to the freedom and spontaneity of Impressionism. From 1893 Pissarro embarked upon a series of Parisian themes, such as the Gare St Lazare and the Grands Boulevards. He continued to spend the summers at Eragny, where he painted the landscape in his most poetic Post-Impressionist idiom. Pissarro died in Paris in 1903.

[1] Pissarro and Durand-Ruel Snollaerts erroneously record the present work as oil on panel, not oil on paper laid down on panel, as the location of the painting was unknown when they compiled their catalogue raisonné. The oil paintings on canvas are nos.472, 876, 918, 1007, 1096 and 1324.

[4] Today part of the US Virgin Islands.

Other Works By
Camille Pissarro: 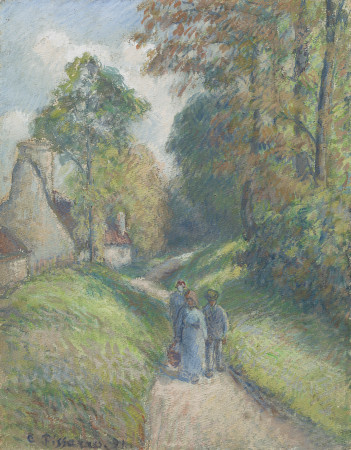