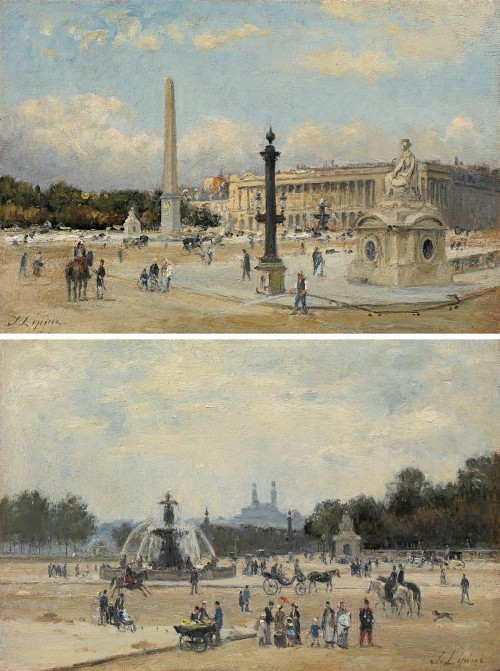 In this delicate pair of panel paintings depicting La Place de la Concorde, the largest public square in Paris, Stanislas Lépine works on a subject matter integral to the core of his distinctly naturalistic oeuvre – the Paris of pre- and early-Impressionism. Lépine painted many views of Paris and its surrounding areas; the Seine and its bridges were a favoured topographical motif. In the present work, Lépine articulates the movements of everyday life in the City of Light, as Daumier might have done before him, Degas as his contemporary and Monet or Sisley after him.

In accordance with Napoleon’s instructions to Baron Georges-Eugène Haussmann to rewrite the design of Paris in 1853, to unify and connect its quarters, the city’s newly formed, late-nineteenth century avenues are punctuated with pockets of well-manicured space: whether small and charming like the romantic Place de Furstenberg with her bordering Paulownias, unique in design such as the circular-shaped Place de la Nation, or expansive as the Place de la Concorde, and steeped in national history. In the former work, Lépine’s perspective is from the Place’s south-east corner, looking past the Obélisque de Louxor that occupies the square’s centre and towards the Hôtel de la Marine, one of the two large palaces commissioned by King Louis XV (1710-1774) to adorn the square, once named Place Louis XV in his honour. The obelisk, acquired in 1829 as a gift from the Ottoman Viceroy of Egypt, Muhammad ‘Ali (following the French occupation of Egypt from 1798-1801), arrived in Paris in 1833 and was placed within the Place de la Concorde three years later, by Louis-Philippe I (1773-1850) on 25th October 1836. In the distance are two of the monumental marble statues representing the cities of France, and one of the Fontaines de la Concorde lies beyond, these architectural additions features of Jakob Ignaz Hittorff’s redesign of the Place between 1833 and 1846.

In the latter work however, the artist’s gaze moves closer to the Seine, with a view that looks east along the river, past the south-facing Fontaine des Mers that sits centre stage of this finely detailed painting and towards the Palais du Trocadéro (demolished in 1937). The silhouetted towers of this vast, Byzantino-Moresque concert hall pierce the low, scudding clouds that hang over the city and each garden that connects to the square trims its borders with thick groves of lush foliage, such as the neat rows of chestnut trees that line the Promenade du Cours La Reine.

In urban studies such as La Place de la Concorde, Lépine meticulously documents the activities of everyday life, imbuing his topographical representations with urgency; scenes of people travelling through the city’s spaces, busy at work, or engaging in social pursuits. In the present work, Lépine utilises a limited palette of colours and a similar employment of discreet tones and glazes is exhibited in the artist’s 1880s View of the Louvre, in the National Gallery of Art, Washington DC. The artist exercises a fluid, almost transparent use of paint, which modified his preferred, subdued colours beneath. These characteristics place this pair of paintings in the tradition of Camille Corot’s poetic evocations, but transplanted into a contemporary, urban setting. Due to the small scale of these companion paintings, it is very likely that Lépine executed the works en plein air. The artist’s focus on atmosphere and the muted tonal harmonies again suggest the influence of Corot, with whom Lépine had studied. With his light palette and very delicate tones of grey, Lépine is one of the artists working in the later nineteenth-century who opened the way for Impressionist landscapes.

The art of Stanislas Lépine joins the pre-Impressionists with the Impressionists. He established his reputation with views of Paris and paintings depicting life on the banks of the Seine imbued with an atmosphere unique to his oeuvre. Although he gained little recognition during his lifetime, he was highly regarded by his fellow artists and, in 1874, was invited to exhibit in the first Impressionist Exhibition.

Lépine was born in 1835 in Caen, Normandy, to a family of cabinet makers. A pupil of Jean-Baptiste-Camille Corot, he exhibited at the Salon in 1859 and during the early part of his career benefitted greatly from the patronage of the collector Hazard and his friend Comte Doria. The critic Georges Lecomte said of Lépine: ‘Il était unique, le direct élève du divin Corot’. The influence of Johann Barthold Jongkind was also very strong; this can be seen particularly in his choice of subject matter and use of light. Lépine was a consistent artist and his style hardly changed after 1869; as a result his works are difficult to date.

Lépine died in 1892 at the age of fifty-seven, almost totally paralysed; he was so poor that a friend had to make a collection to pay for his funeral. After his death his work began to gain some of the critical acclaim that he so richly deserved, and a retrospective exhibition of his work was held at Durand-Ruel in December 1892.