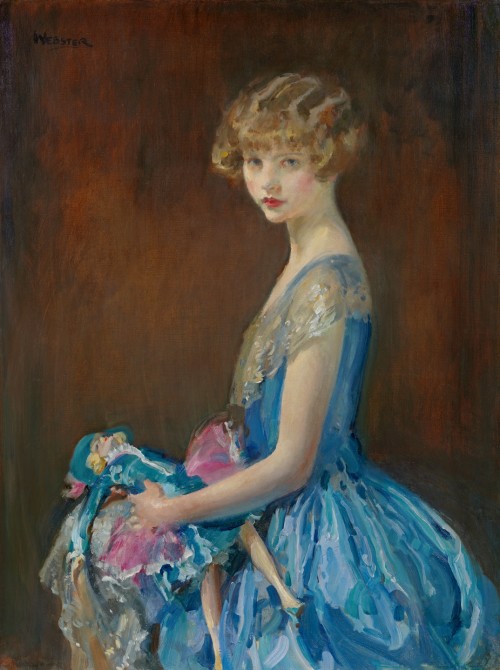 The Estate of Walter Ernest Webster, then by descent

In the run up to Christmas 1927, The Tatler recommended under the heading, ‘Gifts that are different’ from Messrs. Gooch on the Brompton Road, ‘exquisite dolls of the La Poupée genre’.[1] Cynthia in The Bystander’s Christmas shopping guide declared, ‘Fashionable women feel incomplete to-day without their Boudoir Dolls!’[2] On 8th December, the highlight of the Princess Elizabeth Ball at Claridge’s Hotel, London, was ‘a procession of well-known society ladies, each carrying a portrait doll’ dressed in the same costume as its donor, one gifted by the Queen and another presented by the Queen of Spain.[3] By January the following year, the ‘Mannequin’ or ‘Portrait-Doll’ had become ‘The Craze of the Moment’, as Mary Lovat explained: ‘The modern doll often stands for something far more practical than its owner’s frivolity of mind. To begin with, the little model is of the same colouring and type as her mistress, hair, eyes, and complexion matching Madame’s, as nearly as possible. This similarity has its origin in the exploitation of the doll as a means of testing upon it the effect of proposed new additions to the wardrobe... So when Madame evolves some sartorial idea nowadays she first dresses Mlle. La Poupée on similar lines and studies the effect before proceeding further. A touch here, an alteration there, will enable her to achieve the perfection that she aims at. And when at last she proceeds to the dressmaker’s salon she knows to a nicety what will really prove both becoming and suitable. Hence the vogue of the portrait-doll. While the opulent commission doll artists to carry out clever miniature impersonations of themselves, the less wealthy content themselves with buying the doll that most closely resembles them, and accentuating the likeness further with aid from the paint-box. It is important that the doll’s hair be shingled in the same fashion as Madame’s…’[4]

Walter Webster’s glorious La Poupée not only documents ‘the vogue of the portrait doll’,[5] but also records a fashionable young woman whose dress inspired visitors to the Royal Academy

summer exhibition of 1927. According to Mollie Little of the Western Daily Press, ‘A woman who is at a loss to know what mode of dressing will suit her own personality would find answer to her questions at this year’s Royal Academy... To begin with, there is “La Poupée” – a slender, lovely child with a doll. She is of the delicate, graceful type, and so she wears an oldfashioned

frock of delicious delphinium blue, tight of bodice and voluminous of skirt, with a soft lace bertha around her immature shoulders. “Eatable” is the adjective pencilled against the title

in my catalogue.’[6] A beautiful girl in ‘delicious delphinium blue’ is also the subject of Webster’s Rhapsody (fig. 1, purchased from the artist by Gallery Oldham in 1930), Sonata, c.1935 (McLean

skirt. Removed from elaborate domestic interiors and musical associations, the sitter in the present work stands looking directly at the viewer, her pretty, characterful face and strong, dark blond hair suggesting an individual rather than professional model. The girl’s distinctive heart-shaped face, jaw-line and waved bob closely resemble another, later portrait by Webster of Miss

Peggy Earnshaw (Marjorie Joan Earnshaw, 1909–1979, location unknown), the daughter of artist and illustrator Mabel Lucie Attwell and painted at the time of her engagement to artist and

photographer, Michael Wickham in November 1929.[7] Peggy was educated at Bedales and went on to study at the Royal Academy Schools from 1927–31 (Webster also studied there), and became a talented artist and illustrator. It is said that Lucie Attwell’s drawings of children were based on her only daughter Peggy, who began helping her mother with postcard designs in the

1950s and carried on Attwell’s successful business following her death in 1964.[8] Webster, also a successful illustrator, was married to another famous illustrator of children’s books, Susan Beatrice Pearse (1878–1980), known as ‘Trissy’ and best known for the Ameliaanne Stiggins series published by George G Harrap, London. Born in Manchester, Webster won a scholarship to study at the National Art Training Schools (which became the Royal College of Art) and later went on to the RA schools, exhibiting there from 1904. He also exhibited at the Paris Salon

where he was awarded bronze, silver and gold medals between 1912 and 1931.

This girl, perhaps in her early-to-mid teens, might be thought rather too old for the doll she carefully holds, but this isn’t a child’s toy but a boudoir doll, as fashionably dressed as the unknown sitter is. With her hair stylishly shingled, she catches out attention in a sleeveless robe de

style, of blue satin, with a full skirt, and a collar of silvery lace. The robe de style, associated with the designer Jeanne Lanvin in the 1920s, was an alternative to the tubular dress more associated with the decade, and often had some historical features; Paul Poiret was inspired by Velázquez’

Infantas, and other designers incorporated the looped-up skirt of the eighteenth century, as we see in Webster’s portrait. The doll is clothed in blue satin and pink chiffon, the dress knee-length, the shortest ever, revealing much of the legs; the Daily Express declared that 1927 was ‘leg year’ and by that time most women ‘had adopted artificial silk stockings in ‘nude’ or flesh colours’.[9] Boudoir dolls (sometimes called French dolls) were introduced in France before the First World War, and became a popular novelty in Britain and the United States by the early 1920s, and then throughout the 1930s. As the name implies,

boudoir dolls were women’s cherished possessions, encountered in their bedrooms, and placed on sofas in sitting rooms for visitors to admire. With bodies usually of cloth or celluloid, and dressed in the latest fashions (sometimes by well-known designers and available in department stores to match adult styles), with high heels and a face mask on which the most up-to-date make-up could be depicted, boudoir dolls were certainly not for play but for display.[10]

[1] M E Brooke, ‘Christmas Presents’, The Tatler, 27th November 1927, no.1379, p.ii. Earlier in the year, The Tatler refers to a new play by Valentine and Andre Jager-Schmidt, La Poupée Française, ‘a delightful study of the present-day-young-woman who-walks-alone…fashion writer and star reporter on the staff of a big daily.’ ‘Priscilla in Paris’, 23rd March 1927, no.1343, p x.

[2] ‘In order to conform with Fashion’s latest whim, Milady must have for her companion the newest thing in dolls-a dainty little person..dressed in a Paris frock of taffetas and gold lace…sometimes their owners order frocks for them that are amusing replicas of their own’. ‘Milady’s Companion!’, The Bystander, 7th December 1927, p.i.

[3] ‘Men and women of to-day’, The Dundee Courier, 29th November 1927. The Sketch records that Princess Elizabeth attended by proxy with the Duke and Duchess of York in the form of a life-sized doll. The society ladies’ portrait dolls, each dressed in the same costume as its donor, were auctioned after being awarded prizes, 14th December 1927, p.535.

[7] Recorded in the artist’s box [NPD023425] at the Heinz Archive and Library, National Portrait Gallery. ‘Weddings and Engagements’, The Tatler, 27th November 1927, p.xxxvi. ‘The only daughter of Mr and Mrs Harold Earnshaw of Cranley Gardens, SW, who is to marry Mr Michael Wickham. Both Miss Earnshaw and her fiancé are artists’. A portrait by Michael Wickham (1909–1995) entitled Head of a

Girl, c.1931–34, at the Salford Museum and Art Gallery, also resembles the present work. They had two children and divorced in 1940.

[8] Lucie Attwell produced a play book or doll-dressing album entitled Peggy published in 1921, as well as designing a ‘Lucie Attwell’ character study doll on sale from 15s 6d from Peter Robinson, Regent and Oxford St; The Bystander, 14th December 1927. In his biography of Mabel Lucie Attwell, Brian Alderson suggests that ‘Attwell exerted a considerable influence in adult reactions to children…in her

[10] My thanks to Esther Lutman of the V&A Museum of Childhood. 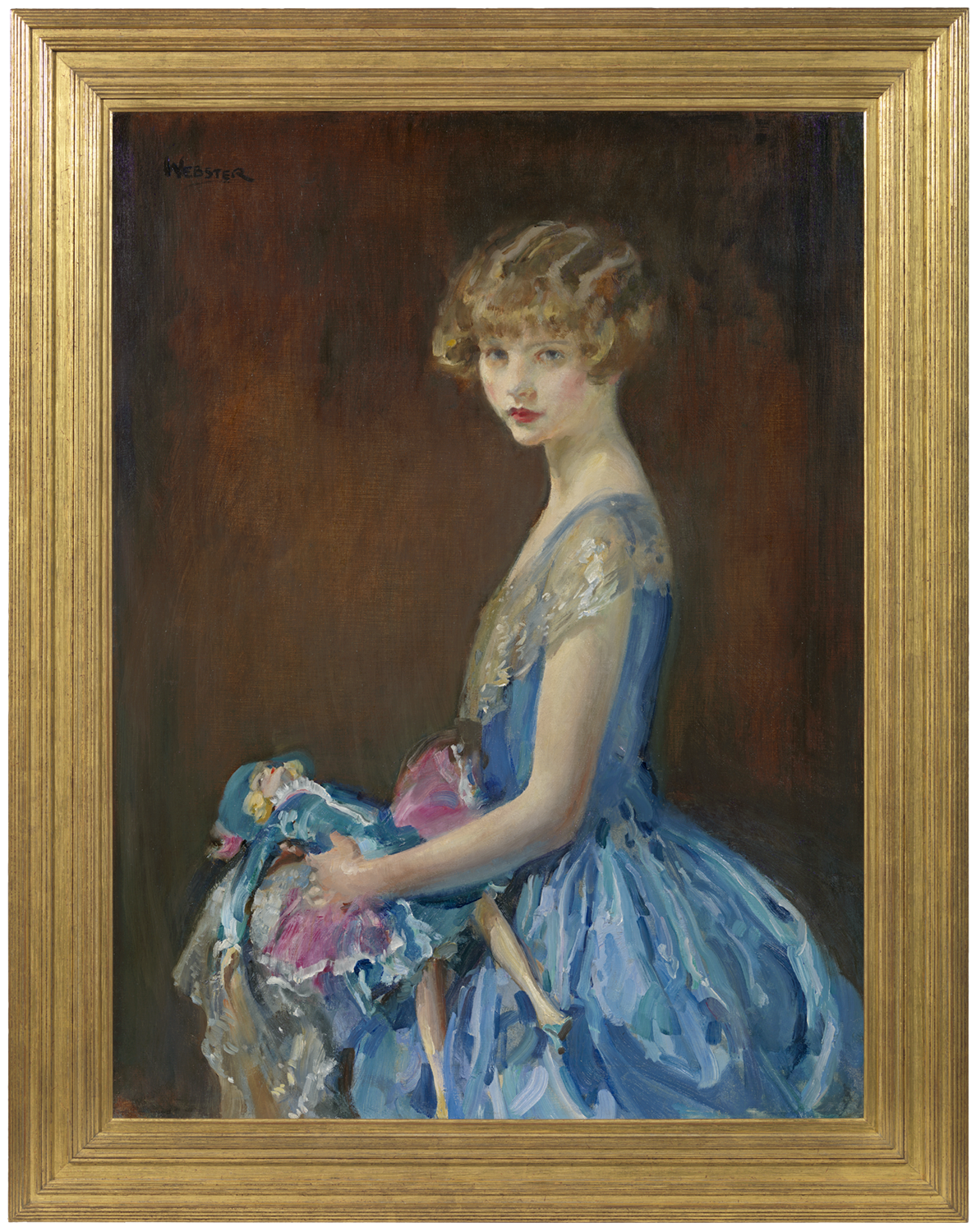