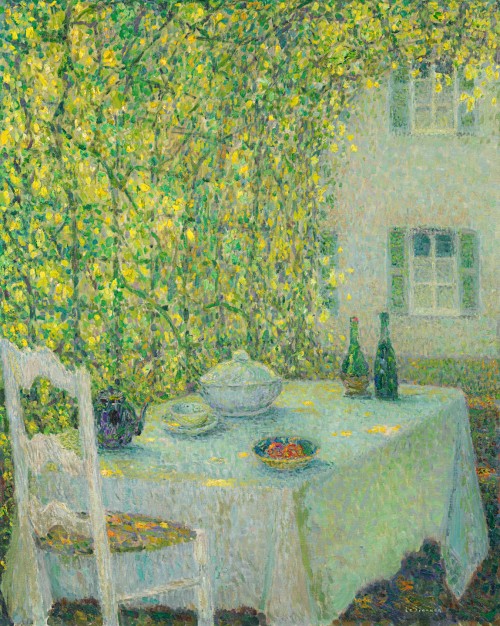 In March 1901 Henri Le Sidaner discovered the historic fortress town of Gerberoy, situated sixty-five miles northwest of Paris. His son Rémy recalled that Le Sidaner ‘longed to plan a garden of his own, in which the landscape would be designed by him personally and in which he could achieve his favourite light effects. He mentioned this project to Auguste Rodin, who recommended the Beauvais area. A potter living in Beauvais, answering to the name of Delaherche, recommended the village of Gerberoy.’[1] He initially rented, then purchased three years later, a small cottage in the centre of the town in order to escape from the pressures of Parisian life. During the following years he undertook extensive renovation and development of the property, taking a personal interest in every aspect of the design of the buildings and the gardens. The artist’s garden designs blended with the cottage and its surrounding buildings, softening the architecture with climbing plants and creating delicious areas of sunlight and shadow and spaces arranged like ‘garden rooms’ with plants of a single hue.

Under the foliage-covered arch, the rustic table in dappled shade combines two of Le Sidaner’s favourite motifs, a still life and his beloved home. Situated on the shaded terrace of the main house, the table is simply adorned with a white table cloth; wine, fruit and a teapot await an unknown guest. Le Sidaner’s subtle use of colour expertly conjures up the atmosphere of a late summer afternoon, its light beautifully filtered through the abundant trellis; bright flashes of green and yellow create a sun-dappled effect against the pastel walls of the house which pulsate with delicate pink and blue tones. Jacques Baschet commented of Le Sidaner: ‘He is a pointillist, but not the kind who decomposes tones and applies them unmixed, thereby letting our eyes reconstitute the colours on our retina. His palette is extremely varied and subtle. The oils bind and melt together in highly delicate harmonies. Nor is he the kind to enclose forms within a heavy brushstroke, as is the practice among the younger school of painters. With him, the contours seem to emerge from the interplay of light, and in this respect, he is similar to Claude Monet’[2].