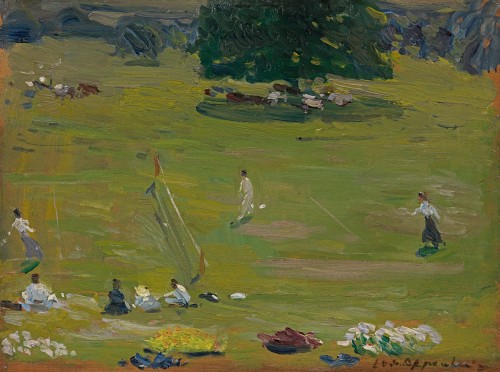 Private collection, UK, gifted from the above

A precocious talent, Joseph Oppenheimer began his formal artistic training at the age of fifteen at the private school of Conrad Fehr, before being old enough to be admitted to the Munich Royal Academy of Fine Arts in 1893. He went on to study in Italy and painted in Rome what he described as his ‘first impressionist painting.’ Oppenheimer had many opportunities to see works of the French impressionists and in his ‘alla prima’ approach and choice of contemporary subject matter, the artist aligned himself with the new movement and their mode of plein air painting. As the nineteenth century drew to a close, Oppenheimer embarked on a grand tour of the Middle East with his uncle, before visiting London for the first time in 1898, via Amsterdam. It was in England at this time, mostly likely from the terrace of Hawkwell Place or Spring Grove in Kent, that the artist painted this delightful study of Lawn tennis.[2]

Kenneth McConkey writes, ‘Lawn tennis was invented in 1874 by Major Walter Wingfield when he took out a patent for a portable court. It was quickly adopted by the All-England Croquet Club at Wimbledon which laid down several permanent grass courts. The game’s popularity immediately spread throughout the Empire and within a short time it had taken in North America with the Staten Island Cricket and Baseball Club. Lawn tennis outstripped other health-giving outdoor pursuits, popularly promoted during the eighties, along with woolen underwear, by Dr Jaeger. It was frequently seen to provide good opportunities for supervised social contact between young people.’[3]

It is possible that Oppenheimer was aware of Sir John Lavery’s most celebrated work, The Tennis Party, 1885, which was first acquired by the Neue Pinakothek, Munich in 1901, before being purchased by Sir James Murray for the Aberdeen Art Gallery in 1926. Like Lavery’s tennis party, Oppenheimer’s elegant, impressionistic sketch encompasses spectators on a bank overlooking the court, where two women and a man play a graceful game of mixed doubles. The bare patches of earth showing through the lush, green grass, reveal a well spent summer playing the newly fashionable sport. Beyond the court, the lawn extends to a tree lined horizon, with cattle sheltering from the heat of the summer sun.

[1] Oppenheimer rented a studio at The Pheasantry on the King’s Road, Chelsea.

[2] Spring Grove, later known as Hawkwell Place, Pembury, was designed by the architect, R H Carpenter as a residence for Rev. R S Tabor (1819-1909), Principal of Cheam School from 1854-1890, in 1875. In 1887, the artist son of poets Robert and Elizabeth Barrett Browning (known as Pen), was married at Hawkwell Place and later owners included W Mewburn Esq., Chairman of the South East and Chatham Railway Company, Sir Leonard Lyle of Tate and Lyle and William Vernon, a Liverpool flour miller. It is now part of Kent College. 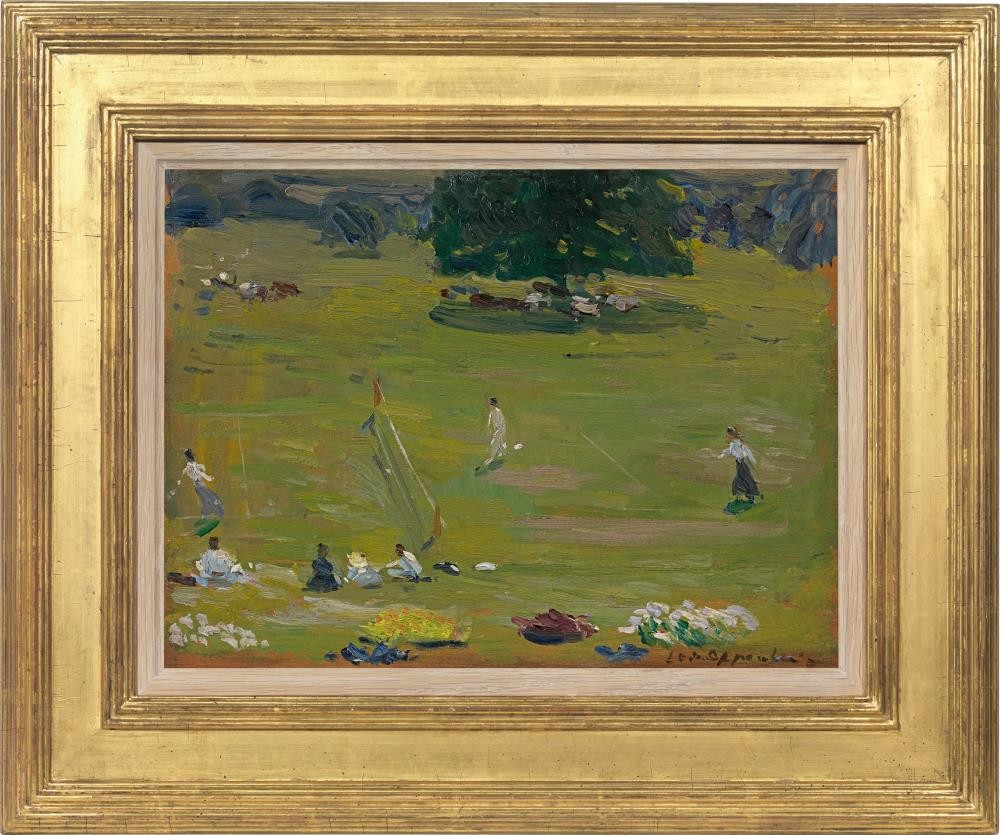