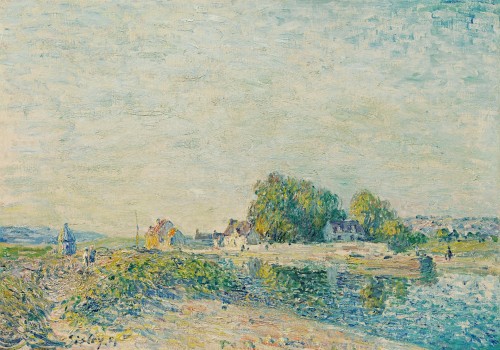 from whom acquired in 1934 by a private collector, Switzerland;

In the autumn of 1883, Alfred Sisley settled in Saint-Mammès, a small village close to the confluence of the rivers Seine and Loing, near the edge of the Fontainebleau forest and about twenty miles south-east of Paris. The area ‘is an essentially Impressionist place with the gentle light of the Ile de France, the soft colours and the constantly changing skies of northern France. There are green woods and pastures, curving tree-lined banks of rivers, canals and narrow streams, wide stretches of river…old stone houses, churches and bridges’[1].

Between 1882 and 1885 Sisley executed a number of works from different vantage points along the banks of the Loing. This radiant canvas depicts the weir on the Canal du Loing, a fifty-kilometre waterway joining the Seine to the Briare Canal through a series of twenty locks. The canal network of France, linking the country’s great rivers, had developed from the seventeenth century into a sophisticated network enabling the far more efficient movement of goods than the rutted, muddy and thief-infested roads. In this painting, a barge makes its stately way on the right of the canvas. As Richard Shone notes, ‘innumerable types of river craft’ passed along the Canal du Loing: ‘the picturesque berrichon, the flat-bottomed margota used for haulage and the predominant péniche, a large multi-purpose barge. A weir was raised and lowered by the lock-keeper, its mechanism housed in two small cone-roofed buildings on either bank’[2].

The painting reflects Sisley’s rich, fluid style of the mid-1880s, its vibrant impasto built up in myriads of tiny touches of paint. The scene pulsates with light from a huge sky that takes up fully two thirds of the canvas, cream worked into blue to evoke the soft atmosphere of the northern French countryside. The river provides a powerful diagonal leading the eye into the picture, with hooked brushwork of midnight-, turquoise and eggshell blue describing the rippling water and the reflections of the houses and trees on the riverbank.

For Sisley, as for John Constable, whose landscapes he admired, the sky was the key element of any painting: ‘Objects should be rendered with their own textures and above all they should be bathed in light as they are in nature. This is what we should be striving to achieve. The sky itself is the medium. The sky is not simply a background: its planes give depth (for the sky has planes as well as solid ground), and the shapes of clouds give movement to a picture. What is more beautiful indeed than a summer sky with its wispy clouds idly floating across the blue?...They are like waves at sea, one is uplifted and carried away’[3].

Alfred Sisley was born in Paris in 1839 into a prosperous English merchant family. He went to London at the age of eighteen to study commerce with a view to entering the family business, but soon decided to devote himself entirely to painting. Upon his return to Paris in 1863, assured of family support, Sisley entered the studio of Marc Gleyre where he met and became lifelong friends with Claude Monet and Pierre-Auguste Renoir. Sisley’s first recorded landscape dates from 1865, yet his financially comfortable circumstances may account for the fact that there are only eighteen known paintings by him pre-dating 1871.

Sisley’s lifestyle changed abruptly in 1870, the year of the Franco-Prussian War, with the death of his father and the financial ruination of his family. He was then compelled to turn to painting as a means of supporting himself. From this time on his correspondence to friends and patrons is often dominated by pleas for financial aid.

Sisley was the only Impressionist to paint landscapes almost exclusively; his chief interest was in trying to represent the mood and atmosphere of nature. Water always played an important part in his work, a subject matter which gives his paintings a joyous vibrancy and purity of tone. He lived near rivers most of his life, at Bougival, Louveciennes and Marly-le-Roi. In 1880 Sisley moved from Sèvres in the Ile de France to Veneux-Nadon and later to Moret-sur-Loing near Fontainebleau, where he was based until his death in 1899.

Sisley exhibited at the Salon des Refusés in 1863, the Salon in 1866, and contributed to four major Impressionist exhibitions, from the first in 1874 until 1886. Despite a successful one-man show staged by his dealer Durand-Ruel in 1883, Sisley’s paintings found comparatively few buyers during his lifetime beyond a circle of loyal collectors. In 1897, at a large retrospective exhibition at the Galeries Georges Petit, not one painting was sold. Since 1899 Sisley’s subtle and delicate landscapes have entered major private and museum collections throughout the world and he has taken his place at the heart of the Impressionist movement. 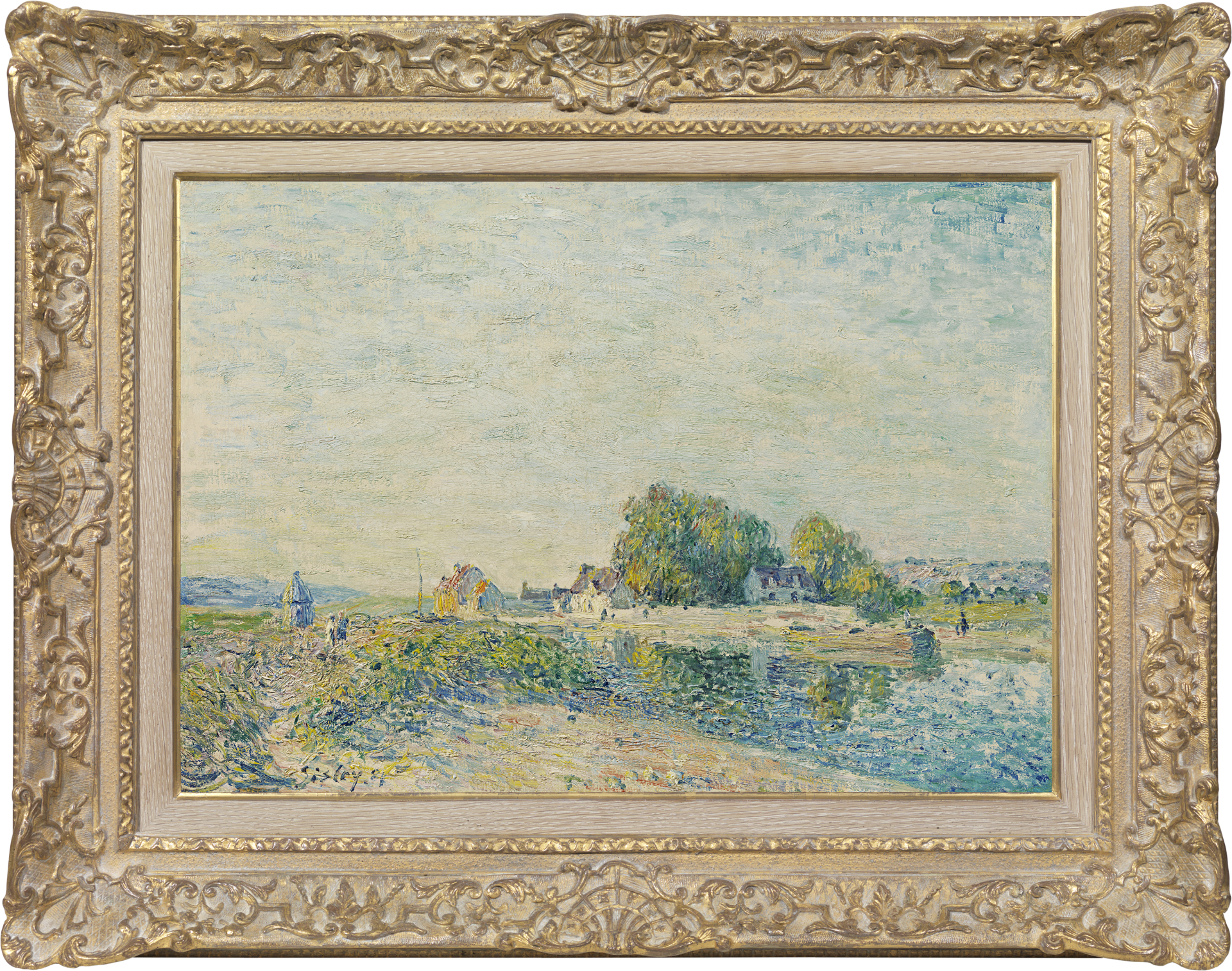