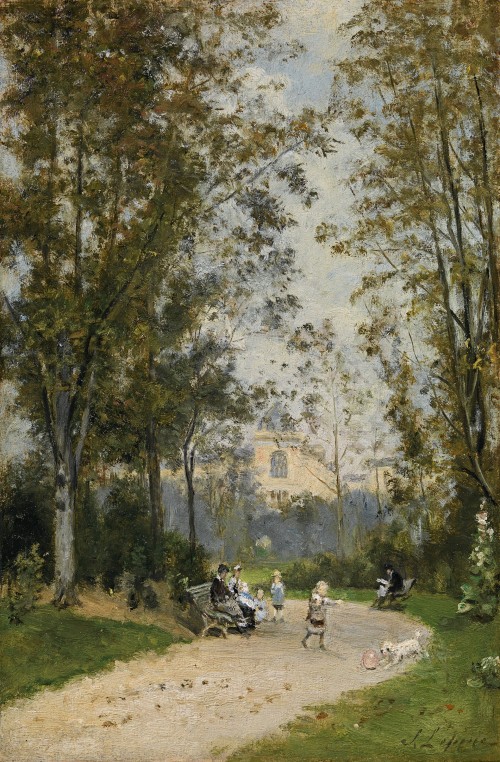 Stanislas Lépine forms a link between the naturalistic, plein-air landscape painting of the early nineteenth century and the world of Impressionism. He studied in the 1860s with Jean-Baptiste-Camille Corot, got to know Manet and Pissarro and participated in the first Impressionist Exhibition in 1874. Norman by birth, Lépine spent most of his career in Montmartre and made many delightful views in and around Paris.

The Parc du Trocadéro lies on the hill of Chaillot to the west of Paris and was laid out for the 1867 Exposition Universelle. The Moorish-style Palais du Trocadéro was built as a concert hall for the 1878 Exposition Universelle, which celebrated the recovery of France from the disastrous Franco-Prussian War (1870-71). Lépine’s painting radiates calm enjoyment and the elegance of modern life. Two ladies sit chatting on a bench while three children and a little white dog play around them. Further off, a gentleman reads a newspaper. In the background can be glimpsed the buildings of the Palais du Trocadéro.

Lépine uses the upright format of his panel to suggest the delicious coolness of the trees which filter the sunlight. He employs staccato brushwork for the leaves rustling in the breeze and touches in the figures with effective economy. The running child and dog give energy to the scene. Lépine’s palette is subtle, the deep green shadows of the trees toning with the sunlit grass and the pale gold of the path echoing the buildings.

Lépine’s cool palette, tonal subtlety and expressive brushwork are influenced by the work of Corot, as is the comparatively small scale of much of his work. Lépine’s Paris has none of the frenetic urban quality found in some later works by Pissarro, Monet and Béraud. His is a city of grand architecture, spacious parks and greenery. He made several paintings of the Parc du Trocadéro around 1878-80, no doubt spurred by the building of the Palais for the Exposition Universelle[1].

The present painting was first acquired by Pierre-Firmin Martin (1817-1891), known as Père Martin, former wine merchant and actor turned art dealer. Martin sold the work of Boudin, Jongkind and Barbizon painters such as Théodore Rousseau, as well as the youthful Impressionists. In 1874 he organized the first Impressionism Exhibition in the photographer Nadar’s studio, in which Lépine’s work was included.

Le Parc de Trocadéro was probably sold by Martin to Nicolas-Auguste Hazard (1834-1913), a major collector of the work of Lépine and the Barbizon painters.

The art of Stanislas Lépine links the forerunners of Impressionism, including his teacher Corot and the naturalist Barbizon painters, with the Impressionists. He made his reputation with Parisian landscapes, particularly the Seine in its many moods, as well as the ports of Caen and Rouen, often seen by moonlight.

Lépine was born in Caen, Normandy in 1835, the son of a cabinet maker. At the age of eighteen he decided to dedicate himself to painting and made copies in the Louvre. He frequented artists’ studios and befriended Adolphe-Félix Cals (1810-1880) and Théodule Ribot (1823-1891). Lépine first exhibited at the Salon in 1859, the year he moved to Montmartre, where he remained for the rest of his life. He married his childhood sweetheart, Marie-Odile-Emilie Dodin, with whom he had three children.

Lépine was influenced by the broadly-handled marine paintings of Johan Barthold Jongkind (1819-1891) and by the delicate, atmospheric works of Jean-Baptiste-Camille Corot (1796-1875), with whom he studied in the 1860s. Quiet and modest, he avoided the more rumbustious artists’ meeting places, but went to the Bon Bock, patronized by Boudin and Sisley, and was acquainted with Henri Fantin-Latour (1836-1904) and Edouard Manet (1832-1883). The latter painted a portrait of his wife. Lépine was highly regarded by fellow artists and a select group of collectors but struggled financially throughout his career. From 1864 he sold works through Pierre-Firmin Martin (known as Père Martin), who introduced him to his most important patrons, Count Armand Doria and Nicholas-Auguste Hazard. Martin was one of the moving spirits behind the first Impressionist Exhibition in 1874, in which Lépine participated.

Stanislas Lépine received a First Class medal at the International Exhibition in 1889. He died in 1892 at the age of fifty-seven, almost totally paralysed; he was so poor that his friends had to make a collection to pay for his funeral. After his death his work began to gain wider acclaim and a retrospective exhibition of his paintings was held at Durand-Ruel in December 1892.

Other Works By
Stanislas-Victor-Edouard Lepine: 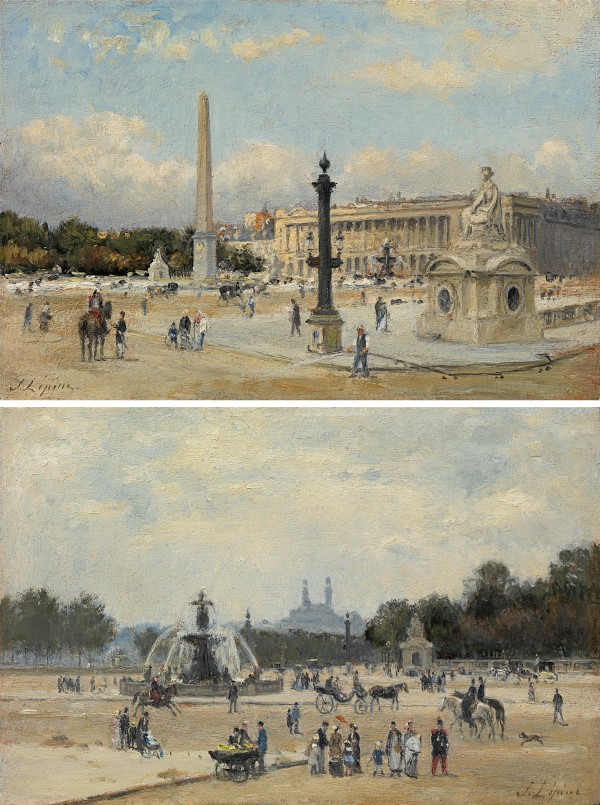