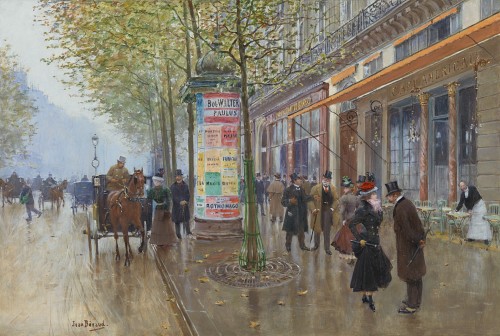 Marcel Proust, a friend and fellow scholar at the Lycée Bonaparte, praised Jean Béraud for ‘his fame, his talent, his influence, his charm, his heart and his intelligence’. Chronicler of Paris par excellence, Béraud followed in the tradition of Louis-Léopold Boilly (1761-1845) in depicting the social groups, fashions, foibles, pastimes and architecture of Baron Haussmann’s dazzling modern city. A superlative draughtsman, Béraud studied his Parisians from the windows of hansom cabs, incorporating them in works which are vivid pieces of street theatre, painted in a style which combines an Impressionist virtuosity of brushwork with precise and witty observation.

The scene shows the Café Américain at 2 Boulevard des Capucines, one of the Grands Boulevards cut through Paris in Baron Haussmann’s urban regeneration of 1853-70. Under Haussmann’s plans, buildings were set well back from the wide streets and required to be of uniform height. Ground floors provided retail space for a burgeoning consumer economy, while the upper floors were apartments.

The Café Américain was in the same building as the Théâtre du Vaudeville, another favourite subject of Béraud[1]. An American writer commented in 1896: ‘bankers and brokers predominate at the Café Riche…actors are numerous at the Café de Suède’, while at ‘the Café Américain congregate literary men and painters’[2]. Respectable in the day, the Café was a more louche venue at night, warned a British visitor: ‘with regard to the clientele of this famous house of entertainment, “the evening and the morning are not one day” ’[3].

Béraud depicts a rain-slicked autumn day, the gold of the leaves echoing the Corinthian columns on the Café Americain’s façade. In the right foreground, a young woman strikes a flirtatious pose as she hitches up her skirt to avoid the wet pavement, showing a glimpse of ankle to the man in earnest conversation with her. At the centre of the painting is a colonne Morris, invented by the printer Gabriel Morris, which stored street sweepers’ equipment and displayed advertisements. Always with his pulse on contemporary life, Béraud paints clearly legible posters, including one for Jules Massenet’s opera Manon, which premiered at the Opéra-Comique in 1884. Based on Abbé Prevost’s eighteenth century story of the courtesan Manon Lescaut, it was also a morality tale for Béraud’s own day. Other notices advertise Bob Walter and Paulus. Walter (1853-1907), was a singer, mime, lion tamer and dancer, whose sensuous displays, employing costume and coloured lights, transformed her into a snake or a butterfly in performances at the Théâtre La Bodinière. Paulus (born Jean-Paul Habans, 1845-1908) was a café-concert singer. In 1897 he harnessed the revolutionary new technology of moving pictures, appearing in five short films by George Méliès which were projected onto a screen, behind which Paulus sang.

This painting formed part of the superb French art collection of the American socialite Margaret Thompson Biddle (1896-1956), daughter of the copper magnate William Boyce Thompson. Margaret firstly married the banker Theodore M Schulze and later the banking heir Anthony J Drexel Biddle, Jr, who served as US Ambassador in Norway and Poland (where the couple narrowly escaped the 1939 bombing of Warsaw). During the Second World War, Biddle was in London as Ambassador and Minister to Governments-in-Exile. Mrs Thompson Biddle devoted herself to war relief and wrote The Women of England, about the role of women in the war effort.

Divorcing Biddle after the War, Margaret spent her time between an apartment in the former Joseph Pulitzer mansion in New York, an eighteenth century hôtel particulier on Paris’s Left Bank, and Les Embruns, her Riviera villa. She entertained everyone from her friends Dwight and Mamie Eisenhower, to Pope John XXIII, to the Duke and Duchess of Windsor. The New York Times reported that Mrs Thompson Biddle kept up an ‘old tradition….that of the….charming woman who maintained a ‘salon’ as a center of political, literary, and intellectual discussion’[4].  Her articles for The Woman’s Home Companion provided her US audience with witty glimpses of life in Paris, a city which had fascinated America ever since wealthy tourists began to flock there in the nineteenth century and discovered Impressionism.

Mrs Thompson Biddle’s collecting tastes reflected her Francophilia, with fine eighteenth century furniture and porcelain, and a silver-gilt service which she bequeathed to the White House (today displayed in the Vermeil Room). She bought works by Corot, Renoir, Monet and Gauguin, among others. The Bérauds in her collection reflect her love of Paris’s stylish vivacity, something that she enjoyed as the epitome of ‘An American in Paris’.

Jean Béraud was born in St Petersburg in 1849, the son of a French sculptor, Jean Béraud, who had probably moved to the city to work on the cathedral of St Isaac. His mother took the family to Paris after her husband’s death in 1853. Jean, like his friend Marcel Proust, was educated at the Lycée Bonaparte (today the Lycée Condorcet). He briefly studied law at the University of Paris and in 1870-71 served in the Garde Nationale during the Siege of Paris. Abandoning law for art, in 1872-3 he studied in the studio of the portrait painter Léon Bonnat. Béraud exhibited two portraits at the Salon in 1873, showing there until 1889. 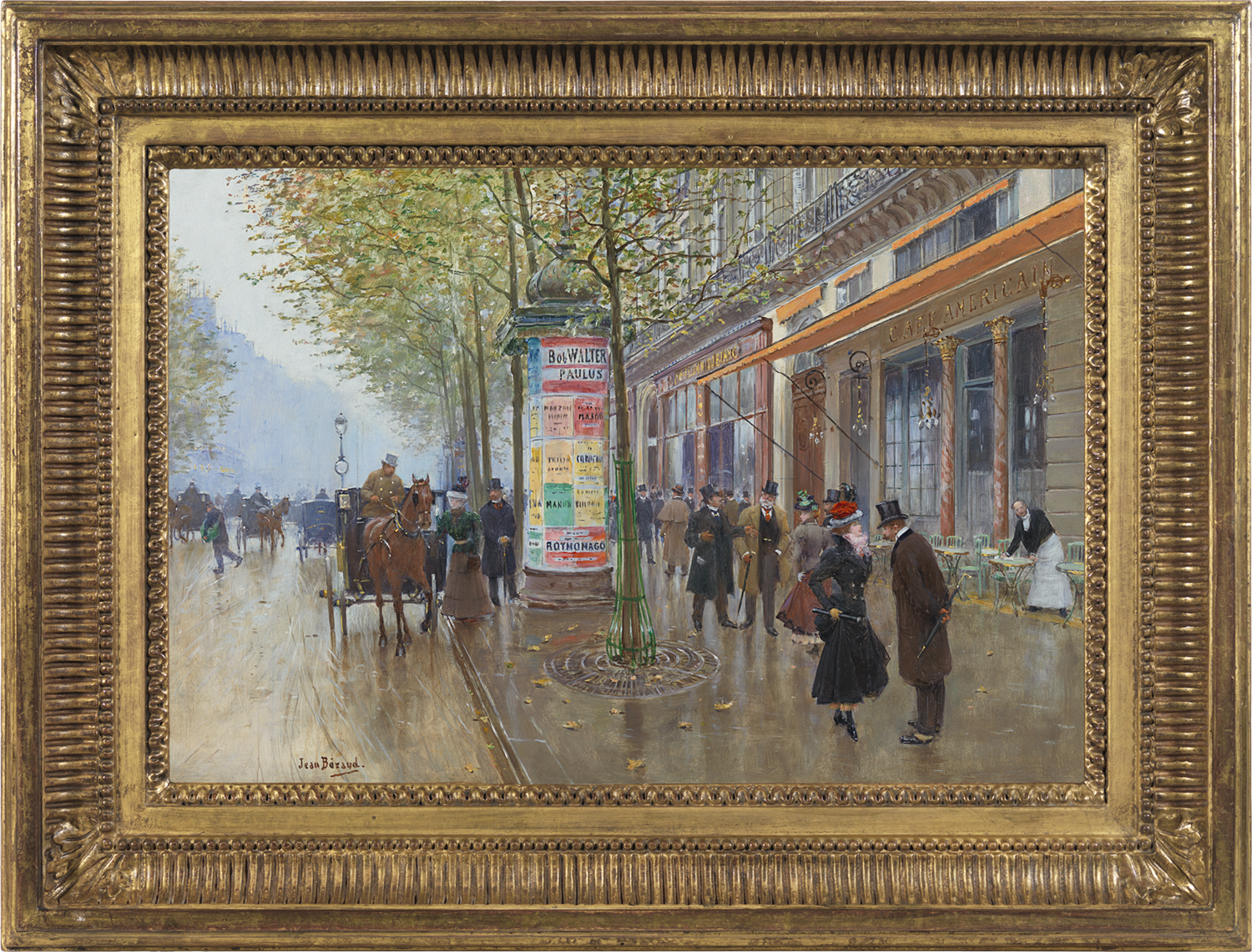